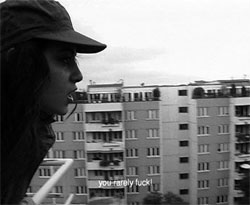 There is not much talk in the West these days about revolution, but during the Cold War it was the watchword for Eastern Europe. In characteristic Soviet double-think, toeing the party line made you a revolutionary, the only requirement being a radical docility. The Soviet Union exported a one-size-fits-all Communism to its satellites, but Marshal Tito believed the system had to be tailored to fit Yugoslavia. This made for a curious self-referentiality and insularity even from the USSR, which found unhappy expression in bombastic public sculpture and clunky abstractions of Modernism. Marko Lulic uses these ponderous monuments, many of which remain scattered around the fragmented republics of the former Yugoslavia, as his point of departure. The loose, almost casual alterations he makes to the originals are reminiscent of Charles Simic’s poem ‘The Supreme Moment’ (1994), which speculates on the options available to an ant under a looming black boot ‘… so polished/He can see himself/Reflected in it, distorted,/Perhaps made larger/Into a huge monster ant’.

Lulic exhibited nine small ‘Improved Partisan Monument’ sculptures based on these ubiquitous ugly landmarks, his renditions composed of deliberately shoddy materials, their measurements lilliputian. Shrunken and deliberately insubstantial, Lulic’s table-top knock-offs convey the extreme earnestness of the original monuments, the thrust of their flat-footed abstract rhetoric crushed under its own weight. He also included two site-specific versions, Improved Partisan Monument (Donji Mihlojac) (2005) and Improved Partisan Monument (2005), both generically phallic shapes of rockets and exploding stars fashioned from varnished fibreboard. These were intentionally made a bit too large and installed like two insufferable bores at natural pausing spots. Even unlooked at, they were hard to avoid.

Lulic’s video Mysteries of Disco (2000) paid tribute to Dusan Makavajev’s film WR: Mysteries of the Organism (1971), a huge sensation at the time of its release and almost immediately banned in Yugoslavia. As in Makavajev’s film, two women bicker about politics and freedom, although in Lulic’s version they’re still decked out in chic revolutionary fatigues. The film begins and ends in a deserted discotheque, as overblown and joy-killing in its way as the Titoist monuments. In its longing to beat the West at its own game, the Eastern bloc went massive, with grandiose interiors often not so much decorated as inundated. In Lulic's video, rather than one mirror ball, for example, there are at least a dozen of different sizes, most of their dazzle lost in the process of reflecting one another. The soundtrack heaves and sighs with canned pop as the camera roams over the expectant booths and bar stools. The scene switches to the roof of a Lego-style apartment block, where the revolucionistas strut, smoke and harangue each other on the subject of free love, a reminder that sex was one of the few available pleasures the state could not regulate. ‘There’s no excitement that equals orgasm’, as one of the women proclaims with the certainty of a manifesto. In the late 1960s Wilhelm Reich’s revolution was the one youth wanted to join.

Two other videos ran simultaneously, each showing three people imitating the shapes of one of Lulic's monuments, two of them holding the third just under his knees and armpits, his limp body slumped like a medieval painting of the Descent from the Cross. Casually dressed in hoodies, jeans and button-down shirts, all six of the men have the generic look of youth. Each loop shows the first two men holding the third and finally letting him down gently to the floor. Unlike the heroic supermen of the original monuments – there are a few glimpses of one in Mysteries of Disco – these fellows look emphatically ordinary. These darkly amusing videos reminded me of poses struck in the 1970s by Scott Grieger, using his body to mimic contemporary sculpture. Both artists play with the idea of provenance and its role in how art is perceived; like Grieger, Lulic adopts an exhilarating irreverence towards his subject matter and even towards a strict definition of art.

Reflecting on the pomposity of Communism’s claims on the future, its need to manifest its power and the final whimper of its demise, Lulic incorporates political ideas without addressing specific political situations. His references are specific, but his subject is universal: the failure of methods, systems and, finally, of ideals.