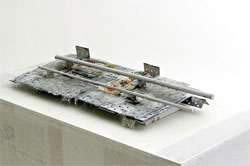 Martin Erik Andersen’s sculptures recall the sort of objects that one might find while tearing down the walls in a dilapidated Copenhagen flat. His series ‘Form Creating Formless – Formless Creating Form [I-IV]’ (2005) – five small, delicate sculptures made of plasterboard, polyester, bronze, iron rods and other building materials resting on plinths – consists of structures that might once have been ventilation shafts or cavities containing gas pipes or wires. There is an obvious parallel to Gordon Matta-Clark’s ‘cut-outs’, but whereas Matta-Clark showed us a cross-section of the body of the building, Andersen shows us its internal organs.

In 1970, before he began cutting things up, Matta-Clark built a wall of rubbish. As Benjamin Buchloh writes in Art since 1900 (2005), ‘this gesture had a redemptive ring that utterly contradicted his entropic bent’, and he soon began to cut existing structures instead. Andersen’s work, however, seems to feed on the inherent contradiction in constructing ‘vernacular’ objects. His ‘cut-outs’ are not only constructed; as a series, they describe modes of construction or representation.

Four out of five of Andersen’s sculptures in the gallery’s entrance are variations on the same motif of a board, with a rod and nails that protrude out in all directions, and one made of bronze and other building materials. The fifth sculpture, Model (2005), a bronze cast of what looks like a ventilation shaft, seems to suggest that the relationship between these different modes refers to a more diffuse logic. It is uncertain whether the bronze version is a model of a 'real' ventilation shaft, unseen inside the wall, or model for a 'false' one to be constructed by the artist. It defies any definition beyond being a station in an ongoing negotiation of form. Andersen plays with contradictions, but mainly he insists on opening a wider and more complex field of correspondence between the sculptures.
In the second of three rooms, a series of eight vertical objects stand on plinths of varying heights, arranged in a line against the wall. Even the pedestals themselves evoke Minimalist sculptures. Their volume and solidity are subject to investigation; you can look inside or straight through the cracks and openings. The various stands could comprise one horizontal sculpture living its own life underneath the actual sculptures. The sculptures themselves can be divided into three forms that reappear in different constellations: pieces of crochet suspended from gallows, bulbous little mountains like bronze ‘pours’, and a 50 cm high bronze tower resembling a high-voltage mast or strip of DNA. The latter piece, a work called Savitri Devi (2005), is actually a web-like construction that spells out ‘SAVITRI DEVI SYNGENDE’ (‘Savitri Devi singing’). A similar sculpture, Karl Maria (2005), spells out ‘WILIGUT GRÆDENDE’ (‘Wiligut crying)’. Savitri Devi was a controversial French philosopher who converted to Hinduism and was sympathetic to Nazism. Karl Maria Wiligut was a Nazi poet interested in the clandestine world of freemasonry and the like. By suffixing the names with the words ‘singing’ and ‘crying’, these literary references are given a vocal, bodily quality.

The three forms seem like parallel formulations, all exploring solidity and its promise of a hidden core. Rather than being bound together by their affinity with the Nazis, the actual connection between them is the phenomenon of the ‘hollow earth’ theory. The theory states that the earth is really a shell, the inside of which is accessible through holes at the poles. Integral to ancient beliefs in India, the theory emerged in Western thought in the Baroque period, and the inside world has subsequently been a subject of diverse scientific and literary speculation. Browsing through a couple of the 10,000 Google hits on ‘hollow earth’, my eye was caught by one distillation of the phenomenon. It described the transgression between worlds as akin to a fly climbing over the edge of a glass, unaware of the difference between outside and inside. Looking at Andersen’s sculptures we are like the fly, never quite knowing where we are – this is essential to the artist’s formulation of otherness as an inseparable part of the self.

Andersen explores a closed-off, internalized visual field, and the physical manifestations of this are extremely interesting sculptures. However, as the works do not transcend their hermeticism, they also end up in imminent danger of being sublime, but slightly powerless objects.