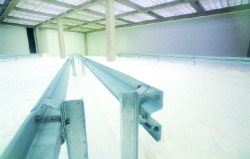 It's like a scene in a snow-globe, the snow-flakes having settled on a section of a motorway. Light grey crash barriers peak at unruly angles through the blanket of snow. But unlike most such scenes, this winter-idyll is life-size: Martin Gostner's Der Friede in Westfalen (Peace in Westphalia, 2003) fills the main exhibition hall of the Museum Folkwang. The crash barrier (the genuine metal article) contrasts with a soft cotton wool carpet of snow that extends across the entire room. Few things interrupt the eternal flow of motorway traffic, but the snow seems to have done the trick. Framing the installation is a long wall of light-coloured wood panelling, with a large, slightly raised window set into it.

Everyone knows about Germany's massive network of autobahns, but no one ever gets to set foot quietly on them - no provision, obviously, is made for pedestrians or cyclists. But the calm of this winter scene, the title of Gostner's installation suggests, is the calm of a battlefield after the fighting has finished. The Peace of Westphalia was the name given to the treaty that concluded the Thirty Years' War in 1648, an important date in German history: the treaty redrew the map of the Holy Roman Empire, and historians have commented that the devastation wrought by the war was 'terrible, especially in the vicinity of major roads' - since it was along these that the religious conflict travelled.

Gostner, who lives in his native Innsbruck, in Austria, often uses titles that site his installations in specific places and at particular times. Three years ago he created an imaginary Museum der Arbeit (Museum of Labour, 2001) for the municipality of Essen. His series of three posters (computer-generated designs printed on fluorescent paper) alluded to a series of fictitious exhibitions, with titles such as 'Part II: Struggle and Solidarity'. The dramatic typography, in huge capitals, went perfectly with the concise location (Museum der Arbeit - Essen Ruhr) and images showing a megaphone, a sales graph and a crossed hammer and spanner. Gostner's simulations often wrap themselves around situations, scenes and events in this way, like cotton wool - or like the breadcrumbs he used to coat a set of wooden tableware in Dicke Aura Heimat (Thick Aura Home, 2001).

Kupferpfandl was the name of a fictitious bar opened by the artist for the Vienna Secession in 2001. On its walls were brightly coloured sheets of A4 advertizing a pet breeders' convention, a demonstration by 'independent women' and an invitation offering 'free beer for all comrades from the Carpenters' Union', produced by Gostner himself, using felt pens, a typewriter and a PC. Whether read in the anarchy of the exhibition itself or in the more ordered context of the catalogue that accompanied it, they add up to a heterogeneous polyphony, chronicling 55 years of Viennese suburban life. Accompanying the exhibition was a video showing the brutal and senseless destruction of an apartment supposedly located above the bar.

The pieces of texts that Gostner uses and the titles he gives his works - the graphics and the installations he creates - attach themselves to their context like the sticky labels he has been working with for many years. This was literally the case with this exhibition, for which he scanned typed sheets of labels into his PC and enlarged them to create 18 shining, laminated pieces of typographic design. Blown up to a metre tall, the grid patterns shimmer like mysterious buttons or modern display panels in shades of silvery olive, shiny graphite or anthracite. Esse - schwarzes - haus - esse - weißes - haus (Eat - black - house - eat - white - house, 2003) evokes Essen, a town built on manufacturing industry and mining. Yet, although the façades of the houses have recently been spruced up, unemployment here is high since much of the town's industrial production has closed down. While the individual words read like inscriptions, their smooth, chemically enhanced surfaces combine to create a context. Standing in front of them, the viewer cannot help making word associations that go beyond the satirical phrases of the copied Kupferpfandl material. On one sheet, four of the labels read a - milk - land - and (2003), while three are missing, the suggestive blanks forming part of the work's rhythm. Like the eerie snow scene in Peace in Westphalia nearby and the industrial landscape