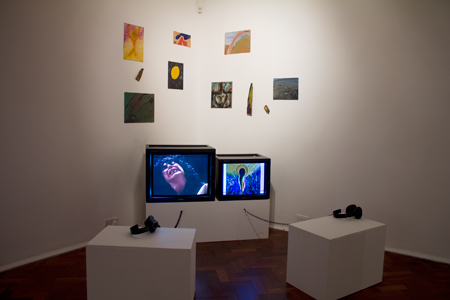 Ken Kesey’s One Flew Over the Cuckoo’s Nest was published in 1962, the same year that Scottish psychiatrist R.D. Laing was also having doubts about the activities of mental institutions. Might madness actually be useful to society? Might it even be handy for the mad? Three years later Laing founded Kingsley Hall, an experimental centre for anti-psychiatry experiments in East London, which – after curing her – launched the fascinating career of its first and most famous resident, Mary Barnes.

SPACE recently presented an overview of the schizophrenic Portsmouth-born artist’s paintings, notebooks and drawings. Thoughtfully curated by Paul Pieroni, the exhibition also included contextual items such as film documentaries and original books attesting to the historical importance of Barnes, who died in 2001. It is difficult to view her art in isolation from a specific moment in ’60s counter-culture, which is deeply interwoven with a critique of established norms for caring of the mentally ill. Barnes’ story is also a testament to Laing himself, a fascinating thinker who was perhaps ultimately flawed (as Félix Guattari argues in his 1973 essay ‘Mary Barnes, or Oedipus in Anti-Psychiatry’). Barnes became the living proof of Kingsley Hall’s effort to rethink madness; with her primitive paintings and wild-child antics, she embodied Laing’s thesis that madness was to be thought of as a shamanic journey, a transformative place from which one could come back wiser.

Because Barnes’ life hangs so heavily over her art, one feels somewhat constricted as a viewer – as with the late works of Sylvia Plath, it’s hard to consider them without thinking of the maker’s pain. Initially, Barnes’ paintings resemble those of Howard Hodgkin: bold colours well chosen in terms of stroke, shape and balanced design. Yet handwritten lines of text are often scrawled across the surface while figures from dreams crowd the backgrounds. She usually painted with her fingers, painting direct from her body to the outside world. If one sees a composition one likes, instantly you wonder what was happening, was she ok? It is impossible to look at her works without this concern, at times one is just looking at some bad stuff, some bad shit has gone down here.

Barnes also painted with excrement. Under guidance she attempted to regress to a childlike state: she stored her stools, fed from a baby’s bottle and shat in other people’s beds at Kingsley Hall. Laing wanted her to break the rules, to regress so as to reawaken what went wrong, to go down and come back up. Meanwhile, the film crews came to Kingsley Hall; Barnes’ drawings had brought notoriety. She may have been made and rescued by Laing, but fame and success also seemed to have played a positive role. (She co-wrote a best-seller with her main psychiatrist Dr Joseph Berke in 1971 and never had a relapse after leaving Kingsley Hall in 1970.)

The area where the exhibition was most surprising was in its dialogue with contemporary art. In an age where art often requires a conceptual narrative, Barnes has back story in spades. This is the real thing. A true juicy historical archive – it’s neither contrived nor forced, like so many neo-conceptual projects where artists claim to have spent a year in residence with the Dutch Secret Service or to have converted sheds into boats on the Rhine. Here you have good old-fashioned expressionism made up-to-date by being yoked to a triple A-rated historical/conceptual back story. If your shtick is making art with a back story, the danger is there is always somebody with a much better, more compelling story to tell. By this logic, Barnes is the best contemporary British artist not working today.

George Barber is an artist who lives and works in London, UK. In 2015, he had solo shows at Chapter Arts, Cardiff, UK; YOUNG PROJECTS, Los Angeles, USA; and Waterside Contemporary, London.