BY Christophe Gallois in Reviews | 01 APR 08 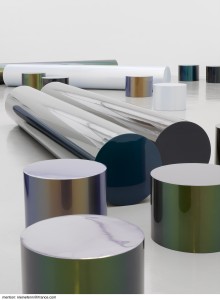 Mathieu Mercier’s ZU (2001) is composed of several lines of alphabetical characters that diminish in size as you read down the wall. The work evokes an enlarged eye-test chart and offers an ambivalent reading. Each letter is a hybrid of two fonts: a geometric typeface designed by Theo van Doesburg in 1919 and a prominently curved font created by Edward Benguiat in 1979. Mercier’s straightforward superimposition of these two opposite styles illustrates a desire to confront two epochs, two different ways of thinking. ZU exemplifies an approach apparent in many of the works included in Mercier’s retrospective, ‘Sans Titres 1993–2007’: one that emphasizes duality as a way of creating meaning. In a similar vein Two Chairs (1998) consists of two seats exhibited side by side against a wall. The first is a plastic garden seat, the second a replica of a Modernist chair by De Stijl designer Gerrit Rietveld, assembled from a number of lacquered white wood pieces. The anachronistic juxtaposition generates a critical reading of two distinctive moments in modernity: avant-garde Utopianism and its appropriation by the disillusioned contemporary consumerist model.

In Drum and Bass 100% Polyester (2003) three primary-coloured objects – a yellow hosepipe, a folded blue blanket, a pile of small red toolboxes – are precisely arranged on black shelves affixed to a wall. Mercier’s piece resembles an updated version of Piet Mondrian’s Broadway Boogie Woogie (1942–3): to the pulsing cadence of the modern city depicted in Mondrian’s geometrical composition, Mercier replies with a drum-and-bass sampling technique, which echoes the frantic rhythm of current times. Sampling is a key component in Mercier’s work; though his practice recalls the legacy of the Duchampian ready-made, its originality lies in the way his references compose a formal vocabulary from which he draws elements for creating new montages.

In a recent interview Mercier explained that at the start of his career he would frequent DIY superstores to experiment with combinations of items, leaving the less satisfactory creations on the shelves and purchasing the more successful compositions. A number of early pieces are directly connected to this activity, including Y-Socket Lamp (1999), a tree-like structure assembled from 11 double sockets and ten light bulbs, and the installation Wall of Plastic Pegs (1994), which consisted of an entire wall covered with variously coloured plastic pegs in a repeating motif. Mercier investigates the conflict between stereotypical applications for DIY materials and détournement processes, illustrating what Michel de Certeau defined in his eponymous 1980 treatise as the ‘practice of everyday life’.

Another characteristic common to a number of works in the exhibition is Mercier’s interest in standard formats. Standard Euro-Palette (2000) is a one-to-one scale reproduction of a goods transportation palette, stood vertically against the wall. The work was fabricated from melamine wood, a material commonly used by DIY enthusiasts, but one too flimsy for making palettes. Standard Euro-Palette plays on the discrepancy between standardized production and the creation of artefacts, between functional and functionless objects. Hi/Lo/No-Tech (2002) consists of five black and grey Perspex circles of different sizes, which correspond to different generations of recording disks, from LPs to digital media. The work proposes an archaeological inventory of forms, illustrating the evolution of standard recording formats in recent history.

‘Sans Titres 1993–2007’ ought not to be understood as a retrospective exploration of Mercier’s practice. On the contrary, the exhibition’s title evokes a single work constructed out of a body of works, and the artist has approached the show’s installation as a narrative construct in which the exhibition space itself and the viewer’s journey play key roles. Presented as a collection of electric cables emerging from the wall as if awaiting connection, Electric Wires (1995) lends the exhibition the guise of an unfinished space. Helmet (1998), a chrome motorcycle crash helmet hung from the gallery wall like a security mirror, reflects and distorts the surrounding space, the viewers and the other works on display in its reflective convex surface. This distorted view is also encountered in 01 (2000), a holographic panel that shows, depending on one’s vantage point, a one or a zero. At different locations in the space the view oscillates between the two binary signs, so that they merge into one ambivalent figure. This oscillation between two forms could be a metaphor for Mercier’s practice: as the articulation of heterogeneous, often contradictory elements, his work never proposes an obvious signification but plays instead with the ambiguity of meaning that arises between the margins.