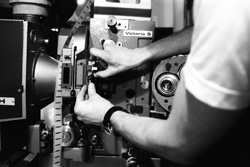 The cover of the 1939 book Britain reads: ‘Mass-Observation, a movement started early in 1937 by two young men and now embracing some two thousand voluntary observers all over the country, exists to study everyday behaviour in Britain.’ Led by Surrealist painter and filmmaker Humphrey Jennings, poet Charles Madge and, later, anthropologist Tom Harrisson, Mass-Observation was an aspiring, if also amorphous, collective that sought to record the minutiae of the lives of the artists’ fellow Britons, culled mainly from overheard conversations, informal polls, street photography and general voyeurism. Their chief tool, the ‘Day-Survey’, was used to suss out anything – from which end of a cigarette people tap before lighting it to what socialism meant to the average northern factory worker. One of their first major ‘Day-Surveys’ recorded the events of 12 May 1937: an otherwise unspectacular day, save for the spectacle of the coronation of George VI, prompted by the abdication of Edward VIII on an otherwise equally uneventful day, 10 December 1936. The two events disrupted the seamless sovereignty of the British monarchy and, in turn, heralded a fascination with the collusion of politics and celebrity that has not abated since. With their army of Joe Public ambassador statisticians, Mass-Observation used 12 May 1937 to illuminate that which working Britons found insignificant and significant in the period between the wars.

Store Gallery’s ‘May the Twelfth’ took the pamphlet May the Twelfth: Mass-Observation Day-Surveys 1937 by Over Two Hundred Observers as its conceptual model rather than its subject, by inviting Simon Evans, Aurélien Froment, Mario Garcia Torres, Rosalind Nashashibi and Gabriel Vormstein to take up the ‘intellectual spirit’ of Mass-Observation in newly-produced works. Although I was initially sceptical about yet another group show with a faintly wistful academic theme, I was persuaded by Nashashibi’s film Proximity Machines (2007), which anchored the exhibition. Proximity Machines is a double-projection of looped 16mm film that recalls the riveting effect that watching the mundane can have on a viewer. One of the film loops examines coach bus seats – of the standard double-occupancy kind – in varying degrees of close-up, from extreme to mid-distance, while recording their colour, texture and pattern. The camera’s attention to the seats is interrupted only by the coach’s jostling movements and a few glimpses of passing scenery. The double seats are a visual pun on the formal structure of the double-projection. The other loop is a metal playground contraption that looks biomorphic, like a primitive Modernist rip-off.

Her camera’s attenuated focus plays up the absence of humans in both projections, emphasizing the individual relationship that we all have to public spaces, be they public transportation or parks. Her film mines one of Mass-Observation’s main strategies, which was to turn its human correspondents into ‘cameras’ that would record the close-up, detail and ensemble variations of themselves and others. They thought that people were unknowingly conditioned to operate like automatons and that only through the recognition of themselves as inseparable from the apparatus – the need to become the ‘camera’ – could they observe and understand human behaviour.

Next to Nashashibi’s work were 11 Years Later and 11 Minutes Later (2006), Mario Garcia Torres’ dual, abutting slide projections, appropriating text from Paul Auster’s screenplay Smoke (1995), laying it over scenes from a Brooklyn street corner and a natural landscape. By shaping Auster’s text as two unrelated but similar conversations, he approaches the same issues of self and observation. However, his effort is over-burdened by overt reference to forms; literature made into a popular film, transposed into the nostalgia of the slide’s fading technology, and the point is lost.

Vormstein’s symbol-like wood sculptures and collaged watercolour paintings on German newspapers stop just short of recognizable symbolism. One of the sculptures, Untitled (2007), for example, resembles both a crown of thorns and a wedding ring, while the other, also untitled, incorporates a triangle intersected with horizontal lines. Are these talismans for something? If so, what? Evans carries on this obtuseness in an untitled paper assemblage of pasted-together phrases that simulate the utterances that Mass-Observation’s volunteers recorded and reconstructed as data in May the Twelfth. My favourite is ‘England still hates its young’. (Said quickly, it sounds like ‘England still eats its young’!) Rendered in coloured pencil, Evans’ verbal–visual fragments conjure the stop-and-go of live conversation by ending abruptly three-quarters of the way down the page, leaving the remainder of the composition a blank Minimalist rectangle.

The punch in the exhibition is provided by Froment’s photographic series ‘An Extract from Projectionism (A Manual)’ (2006). In it Froment reiterates the literal process of observation and recording. Four photographs, each composed in a four-part narrative sequence, demonstrate the use of Cinemeccanica’s Victoria 5, a 35mm film projector used in multiplex film screening. Chosen from over 100 others, these photographs are elegant, precise and deadpan, functioning, as their title suggests, like a didactic manual. They allude to the mechanisms of the other work in the show, suggesting that for every function there is an object. Or, as Mass-Observation pointed out, behind every pageant there is a purpose.

is an art historian, critic, curator and assistant professor of the History of Art at Vanderbilt University, Nashville, USA.