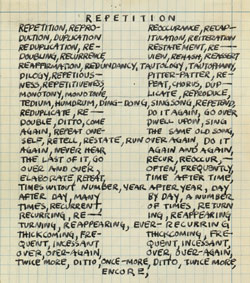 Cited as the first Conceptual art exhibition and responsible for spawning decades of lousy Xeroxed artists’ books, Mel Bochner’s ‘Working Drawings and Other Visible Things on Paper Not Necessarily Meant To Be Viewed as Art’ (1966) is the bedrock of mid-century Conceptual art history. Ironically, the project was the result of an innocuous Christmas exhibition at the New York School of Visual Arts that Bochner, as an art history faculty member, was asked to curate. He collected drawings from his friends, conveying to them that the offerings needn’t be ‘art’ per se. Not satisfied with Bochner’s procurement of work, the gallery’s curator refused to spend money framing the submissions, so Bochner photocopied four sets of the 100 drawings, reduced them each down to standard paper size, inserted the sets into a binder and placed each binder on a pedestal.

In the exhibition ‘Mel Bochner: Language 1966–2006’ viewers could flip through these seminal books, comprising studio notes and working drawings by Sol LeWitt, Dan Flavin, John Cage and Donald Judd, among others. The Conceptual and historical weight of this piece are located in its attitude more than in its content. Like Bochner’s assessment of Minimalism at that time, the four identical black office-style archives signal a paradigm shift away ‘from the humanistic stammering of Abstract Expressionism, Happenings and Pop art’.

Also included in this comprehensive and sometimes tedious exhibition of language-based research by Bochner was ‘The Domain of the Great Bear’, a collaboration with Robert Smithson published in Art Voices in the autumn of 1966. Here an oddly humorous and misleadingly fictional art project in the form of an essay about the Hayden Planetarium in New York, set within the pages of an art magazine, is an obvious critical gesture directed at the authority of authorship, originality and truth. Yet this piece is not without its poetic side. ‘The Domain of the Great Bear’ and Bochner’s word portraits, also from 1966, have sweetly ripened over the past 40 years. Where initially these works sat at the cusp of subversive critique, they now read as compelling literary exercises. For example, the four-inch-square ink-on-graph-paper Portrait of Eva Hesse (1966) embodies some of the Renaissance truths Bochner was pushing against. As in all his text portraits (Ad Reinhardt, Dan Flavin, Donald Judd, Eva Hesse, Robert Smithson, Sol LeWitt and a self-portrait are all included in the exhibition), Bochner employs a thesaurus to compile concentric circles of words that describe his subject. Despite his use of objective tools – lexicon and graph paper – Bochner’s little portraits are subjective, singular and emotionally tender.

Language is Not Transparent (1970), a text written out in chalk on a painted section of wall, and Bochner’s prepositional sculpture works from the same year are ambitious attempts to give visual form to Wittgensteinian logic. The difficulty with much of these works runs parallel to that of Wittgenstein’s statement that ‘It is difficult to know something and to act as if you did not know it.’ Bochner regularly asks the viewer to act as if they didn’t understand his logistic inquiries into objective truths. Much of his work comes across as pretentious and impenetrable when it is often obvious and simple. Take, for example, Axiom of Indifference (1973), where Bochner employs tape to square-off areas that contain pennies. Denotations written on the tape correspond to the location and proximity of the coins on the floor. ‘SOME ARE IN’, ‘SOME ARE OUT’, ‘ALL ARE OUT’, ‘ALL ARE IN’ further the practice of ‘reading’ visual language over ‘seeing’ visual language.

Bochner’s recent ‘Thesaurus Paintings’ continue the adjective project set out in his word portraits from the mid-1960s. These newer paintings – Obscene (2006), Useless (2005), Nothing (2004) and Meaningless (2004) – employ expanded definitions found in the most recent imprint of Roget’s Thesaurus. In these colour-coded text block paintings vulgarities are lined up with vernacular adjectives, and obscenities commingle with colloquial vocabulary. The ‘Thesaurus Paintings’ are both compellingly visual abstractions and smart Conceptual investigations into the shifting social territory of language and meaning. They trump Bochner’s And/If/Or/But (2006), a four-canvas endeavour that employs fields of interference paint and one conjunctive word per canvas. These paintings are too pretty and too intellectually obvious to hold the viewer’s attention. The conjunctive may be the perfect metaphor for a rhizomatic world-view, but Bochner’s best works have always flirted with the verification of prepositions.