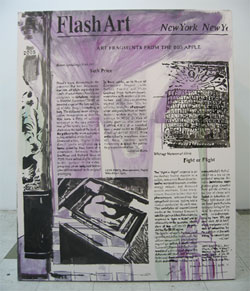 For his second show in New York, Merlin Carpenter presented 32 paintings that continued his nuanced critique of the condition of contemporary art-making. Working within the framework of the gallery, he presented a suite of canvases that cast doubt on current systems of cultural reception and consumption.

In the week preceding the opening Carpenter reversed traditional gallery roles by enlisting the gallerists as his assistants and asking them to paint canvases with abstracted renderings of news footage from 9/11 in the style of Josh Smith (another Reena Spaulings artist who has received attention in the past year for his loose abstractions). Superimposed over each painting, the artist copied the gallery's press coverage from the past year, one photocopied review or article clipping per canvas. The resulting works were displayed in a leaning stack against the wall as if awaiting pick-up by art shippers, and functioned as a three-dimensional press kit that viewers could peruse at their leisure.

Part painting, part sculpture, part archive, the exhibition paintings became indistinguishable from other gallery works temporarily stored at the sides of the room. Carpenter’s decision to leave a text piece on the ceiling from a previous show – the fictional artistic entity Claire Fontaine’s I HAVE NO WORDS TO TELL YOU HOW MUCH I HATE THE POLICE (2005, printed from the flame of a cigarette lighter and taken from the Jean-Luc Godard film Made in USA, 1966) – cast further doubt about what constituted the show, what was part of the gallery and what was happenstance. The plausibility of such ambiguity was the result of a laissez-faire installation that assumed power precisely because it was not installed. Further, it demonstrated one of Carpenter’s favourite ways to push the limits of exhibition – by including art and objects from his circle of friends and acquaintances as part of the show.

Carpenter also capitalized on the fact that it remains a transgression to touch objects in a gallery, involving his viewers in art world taboos by instructing them to move the paintings about. In this instance gallery-going, a generally staid activity, became a cumbersome and time-consuming task, akin to the awkward activity of looking through a poster bin. The content of individual works more or less dissolved in the process, an effect that secondarily blurred the individual successes of gallery artists into a general demonstration of Reena Spaulings’ upward mobility, often sealed with a stamp of approval by the recurrent, distinctive header of the New York Times.

The flyer for the show was a photograph of a young Andy Warhol shopping in a supermarket. As with the paintings, Carpenter’s use of the image was an act of appropriation, drawing attention to a self-conscious coming of age in the art world. It highlights the Warholian element of the works on view – namely, the speed and regimen of their production – and begs a comparison with the late artist’s assembly line use of tabloid archives for his silk screen paintings.

Despite these shades of nostalgia, Carpenter’s gesture nonetheless seems deeply cynical; the exhibition’s title, ‘A Roaring Rampage of Revenge’, for instance, hints at the intensity and anger behind the works. Like Martin Kippenberger, whom he assisted as a young artist in Cologne, Carpenter is committed to painting as a conceptual device. And yet the fact that he relies on stretched canvases as his tool of critique demonstrates a dedication to art and its histories that transcends his acid commentary and deep distrust of a contemporary art scene defined by the next hot young artist, the indistinguishable group show and the vapid press that edifies and promotes it.

In a way Carpenter is the ultimate insider artist, creating work filled with so many internal references that it has currency only for those who already agree with him. Yet regardless of one’s knowledge, it is not hard to appreciate the frustration prompted by headlines such as ‘Talent Call: Hot Artists Wanted […] Many Apply But Few Are Chosen’. What remains unclear is whether Carpenter is proposing a solution to this status quo. Perhaps he is suggesting that art can at best only critique and negate, but in doing so can act as a healthy conscience when considering serious questions of authorship and fame.