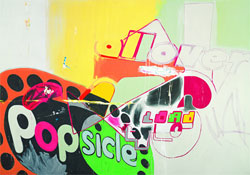 There’s less than ten years between Michel Majerus’ 1993 painting Untitled (Loss of Self Confidence) and Splash Bombs 3 (2002). The first, created by a recent art school graduate, is a bleak black and white composition. On a whitewashed ground the words ‘loss of self-confidence, lack of culture’ are traced awkwardly, as if from a crooked projection. Below these wonky block letters is an abstract, floating, decapitated, cap-wearing head – maybe a silhouette of a cartoon character – and beside it is another brutalist figure with a rough, circular face hovering as if detached from its body. The painting could be a piece of graffiti on an unused roadside billboard, a rogue advertisement for personal doubt or an artistic capitulation. It’s a ‘good’ bad painting, but it could easily have been consigned to oblivion if it weren’t for the work that was to come.

Rushing forward nearly a decade – screaming yellow, orange, green and blue, Splash Bombs 3 is a world away, seemingly put down with perfectly controlled fury or with enormous tongue-in-cheek bravado by a now well-known artist with an international practice and reputation. Twenty square metres of in-your-face colour inspired by washing powder packaging, a hedonistic mélange of old-school American Abstract Expressionism and Pop art in a contemporary digital blender; frank, energetic and untroubled. Between these two paintings Majerus apparently produced more than 1,500 staggering, confrontational works. Speed and quantity, however, don’t necessarily imply ease – rather, perhaps, its opposite. Majerus’ practice was about working doggedly: a manic collection of sources, sampling, appropriating, reproducing, digital collage, nervous activity, turbo production, pirating, regurgitating, consuming and spitting it all back out on canvas, vast plastic print-outs and in installations. He was, as Günther Holler-Schuster noted, a kind of ‘visual hacker’. It was crucial that Majerus was a painter in a decade that for the most part feigned scepticism about the medium, while he and other culture producers got wired up and adapted to the idea that images were plentiful, cheap and manipulable as never before. While obviously revelling in retro High Modern techniques, he was at the same time finding ways to get paintings to climb or slip off the walls, to jump out or warp their given architectural and conceptual frames. His paintings became virtual or head spaces.

The tandem painting exhibitions ‘Demand the Best, Don’t Accept Excuses’ and ‘What Looks Good Today May Not Look Good Tomorrow’ were the second stage of a posthumous five-institution retrospective that began in Kunsthalle Graz and the Stedelijk Museum, Amsterdam last year, and which will conclude next year at the new Musée d’Art Moderne Grand-Duc Jean in Majerus’ place of birth, Luxembourg. Each exhibition was conceived to place a different emphasis on his work. Retrospectives inevitably have to do with the benefit of hindsight; they are basically synonymous with a process of summing up, the idea of giving a definitive overview, trying to get the artist canonized or marking out the boundaries of an artistic lot. Ironically Majerus’ iconoclastic work has much to do with boiling everything down, synthesis and summation, but in a way that the big picture remains elusive, tantalizing, part of a flux.

Having seen many of his works over the years in solo exhibitions and in the mega-sized group shows that blossomed in the late 1990s, it was moving and shocking, in at least disorientating, to see Majerus’ work as he probably never saw it or would have installed it himself. Here it was inflected by an unavoidable eulogy to the artist – who died in 2002, at the age of only 35 – and accordingly reverent rather than cheeky, as the artist himself often was in his approach. In Hamburg there were about 18 of his giant multi-panelled paintings, some covering 100 square metres, including the delightful comic-based work Katze (Cat, 1993). In Hanover there was a selection of his 60 x 60 cm bit-size canvases that are a kind of referential patchwork and, upstairs, a reconstruction of his painting installation Qualified (1998). In this painting Nintendo figure Super Mario, Space Invaders, Tron and the Teletubbies are given as much attention, and get to share the same painterly planes in homages to work by figures such as Willem de Kooning, Andy Warhol, Frank Stella, Robert Morris and Ellsworth Kelly. Majerus could have been an excellent forger.

Paintings for Majerus seem to have been more than anything else signs of and for his times, especially considering the slogans constantly repeated in his work: ‘a response to something already experienced’, ‘fading image’ or ‘yet sometimes what is read successfully stops us with its meaning’. To these we could add: premature conclusions always leave you wanting more.