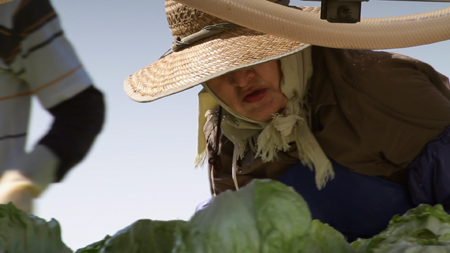 Mika Rottenberg’s Squeeze (2010) examines the synchronicity of globalization and the real bodies – in this case uniformly female – caught up in the mechanics of 21st-century capital. The video component of Squeeze literally manifests the shrunken-down world of the global economy and the rabbit holes of global communication.

This piece is set in a labyrinthine plywood box, whose compartments variously house a Teutonic factory overseer, a row of Chinese manicurists, four perky but anonymous bottoms, a single prone and obese woman, and a perspiring woman who is ‘squeezed’ until she produces glittering flakes of skin. Various holes act as portals into specific sites of labour: an Arizona lettuce farm at harvest and a rubber plantation in India. It nods to a set of concerns that are simultaneously urgent and fashionable (globalization, labour, capital, immigration), and is caught up in a clear argument about the exploitation of the female body. But it also follows its own singular logic. Visual and physical motifs are used to create links between different worlds, so that a head of lettuce leads to a human head of hair, or a hole links between a fictional stage and an ‘actual’ documented world.

Squeeze is, among other things, a parody of industry, featuring both the individual characters and the bureaucracy of labour. It also clearly frames the value attributed to the product as essentially senseless: the product of the frenzied labour depicted in the video is a cube of latex, lettuce and female cosmetics. Meanwhile, the other components of Squeeze make it clear that the industry Rottenberg is mostly talking about is the art industry.

Rottenberg employs the logic of the commercial gallery to maximum effect, using the market of which she is a part to form her critique. Outside the cube in which the video is installed hangs a photograph of gallerist Mary Boone, proudly holding aloft the lettuce cube produced in the video. The message is clear: what you’re buying here is industrial strength trash. The third component of Squeeze drives the point further home. On another wall of the gallery hangs a document recording the shipping details of the aforementioned trash cube (including a dry description of its components); the lettuce cube is currently in storage in the Cayman Islands and is not to be removed. Prospective collectors are to purchase shares of the stored cube, and are not permitted to physically see or own the art object itself.

In this way, Rottenberg alternates nicely between the materiality of the process we see on screen, and the immaterial manner in which its market value is constructed. She links the systems of the art market to the hollowness of the recently collapsed financial markets, referring to the work as ‘my own Ponzi pyramid’. It’s a kind of double-edged critique that works due to Squeeze’s status as a work for sale in the art gallery; in this way, Rottenberg succeeds in having her ideological cake and eating it, too.