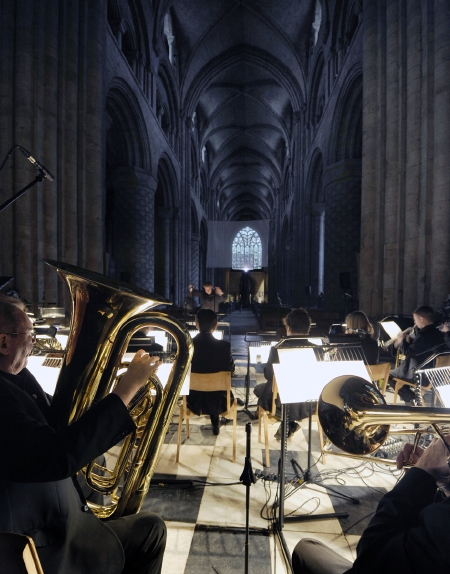 Britain’s coal mining industry has all but vanished, though the brass bands in which miners once played after a hard day’s toil live on. The organizers of Durham’s music festival BRASS certainly see such music as more than a forlorn echo of the North East’s glory days. From 3–18 July the city’s streets and concert venues were filled with both traditional ensembles and a wider range of jazz, funk and global sounds. A direct link to the past came in the form of the Miners’ Gala during the festival: once a workers’ holiday dedicated to the meeting of trade union chapters, the Gala still features a parade of former miners through the city, proudly bearing embroidered union banners as they march behind the immaculately polished instruments of their colliery bands.

Specially commissioned for the festival, The Miners’ Hymns places mining at the heart of the city’s history, with an opening performance in the 11th-century Durham Cathedral. In this setting, there appeared to be some risk in the choice of the event’s producers, Forma, of two relative outsiders – American film-maker Bill Morrison and Icelandic composer Jóhann Jóhannsson – to explore such a deep-rooted and passionately fought-for seam of British culture.

Several of Morrison’s films, most notably Decasia (2002), use the physical degradation of old film stock to explore our unstable, unreliable relationship to the past.

Jóhannsson, co-founder of the Kitchen Motors collective, seems equally drawn to the lost and the never-quite-was: his 2008 album Fordlândia was inspired by Henry Ford’s failed attempt to transfer smalltown USA to a colony of rainforest rubber labourers. Would The Miners’ Hymns be a celebration of mining or its belated funeral dirge?

The work does indeed start in elegiac fashion, with a projection of present-day colour footage shot from a helicopter that roams the county’s coast as subtitles identify the sites of former mines. The musicians, a mix of professionals and the NASUWT Riverside Band, organist Robert Houssart and Jóhannsson on piano and electronics, sat below the screens. Jóhannsson used the instruments to great effect both within and outside the brass band tradition, crafting bright, cascading cornet motifs redolent of fractured fanfares or, as in the opening segment, layering sustained discord against the organ’s mournful decay.

Triggering each section of film in time with the music, Morrison’s images span the 20th century, with film from the BFI archive and a range of regional sources, much of it well preserved. Slowed-down monochrome footage of a mid-century Gala depicts a mass of flat caps and banners. As the camera pauses on the careworn faces of individual miners and their families, it becomes clear that, instead of a sentimentalized remembering of the ‘good old days’, Morrison and Jóhannsson have identified the ambivalence felt by many mining communities towards their way of life.

This is developed further in a section following men descending in a cage lift to the heart of the pit, a rumble of electronics hinting at a primal dread barely kept at bay by the miners’ breezy demeanour. High-contrast footage of busy pumps and pistons and the strange beauty of gleaming coal chips on conveyor belts evoke the worker-and-machine harmony of documentaries such as Man with a Movie Camera (1929). Yet scenes showing miners stooping to negotiate tunnels built not for human comfort but for maximum coal extraction are a reminder that these men paid a harsh physical price for working underground.

Scenes of children collecting nuggets on the beach and sliding down spoil heaps give way to a more troubled mood as policemen erect barricades, culminating in footage of the 1984 miners’ strike set to surging chords and subtly martial percussion. After such battles, a return to early-20th-century images of miners emerging from the pit with their heads bowed and the Gala’s smiling, waving crowds carries an ever-greater weight of poignancy. Yet as the miners’ parade was shown marching into Durham Cathedral itself and the music became more overtly hymnal, The Miners’ Hymns strikes a sensitive and thoughtful balance between commemoration and questioning, celebrating both the joys and darknesses of the miners’ stories, its face proudly streaked with grime.