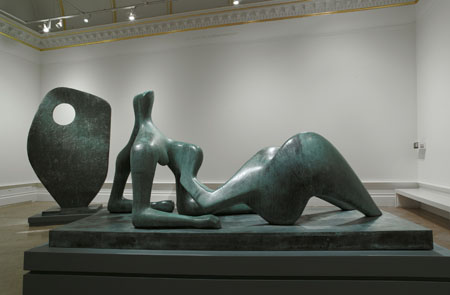 Described by its curators, Tate Britain Director Penelope Curtis and the sculptor Keith Wilson, as a ‘look back over a century in which Britain became internationally recognized for its sculpture’, ‘Modern British Sculpture’ has drawn belches of critical dyspepsia from nearly every corner of the nation’s popular press. In short, the exhibition has been found guilty of two sins. The first is the sin of naming: most newspaper reviewers felt that the title suggests a survey, no matter that the curators clearly and convincingly disavow any such intent. The second (dependent on one’s faith in the first) is the sin of omission. Why no room devoted to the 1950s ‘Geometry of Fear’ or the ‘New British Sculpture’ of the 1980s? Why ignore Rachel Whiteread’s spectral casts of empty space, the bombastic humanism of Antony Gormley or the bland uplift of Anish Kapoor? And why feature such determinedly non-British fare as the unloved firebricks of Carl Andre’s Equivalent VIII (1966), the floating basketball of Jeff Koons’ One Ball 50/50 Tank (1985) and the mouldering, screwed-together apple- and pear-halves of Urs Fischer’s Untitled (2000) in their place? One answer is that exhibitions, like sculptures, are composed of both masses and voids. In ‘Modern British Sculpture’, each absence is purposeful, and gives shape to what is present.

Curtis and Wilson’s roughly chronological show begins not with sculptures but their simulations. In the centre of the first room, a 1:1 scale wood and plaster copy of Edwin Lutyens’ 1919 Cenotaph (in nearby Whitehall) rises to the ceiling, here divested of the flags, wreaths and ceremonial theatre that make the original’s task of commemorating Britain’s war dead feel anything like achievable. All that remains is a pale, abstract slab, overseen by eight photographs of the plaster prototypes of Jacob Epstein’s 1908 cycle of nude figures – representing Youth, Maternity and even Chemical Research – which were mounted high up on the façade of the British Medical Association building on the Strand, and which were mutilated in the late 1930s, their genitals smashed off in a Roundhead denial of art, or sex, or both. It’s a juxtaposition that has much to say about how the Modern was given form, and where and why it was tolerated, about employing plain surfaces to smooth over the memory of flesh-and-blood bodies destroyed in World War I, and the destruction visited on their stone counterparts in the shadow of the second. It also sets out the show’s central tension between figuration and abstraction, and how these modes might meet the demands of the work and of the world.

Imperial plunder, as much as mechanized warfare or the faltering of the figurative, was a midwife of British sculpture’s modernity, and Curtis and Wilson explore this in a bravura room that brings together items from the British Museum with works by the early-20th-century sculptors who fell under their influence. Spot-lit in the gallery’s gloom, a granite figure of the lion-headed Egyptian god Sekhmet (1350 BCE) stands beside the smooth wooden question mark of Maurice Lambert’s 1932 The Seed (Narcissus), and the sinuous sandstone torso of a Bodhisattva carved in ninth-century India shimmies up against a rouged-nippled nymphet by Eric Gill from 1928. From here, visitors are guided through a sequence of sparse, smartly installed spaces in which the curators demonstrate that (as they aver in the catalogue) ‘the answer to a sculpture is always another sculpture’. Taking carving and virility as its theme, one gallery contrasts Epstein’s big-schlonged alabaster Adam (1938–9) with Henry Moore’s coy and rather sleepy Snake (1924). In another, entitled ‘The Establishment Figure’, Sir Alfred Gilbert’s Jubilee Memorial to Queen Victoria (1887) is set against the oozing purple skirts of Philip King’s Genghis Khan (1963). Here, wordplay and sight gags (the Queen regards the King...) reinforce a trans-historical examination of where and how authority is invested and made manifest, and what relationship it has to sculptural and corporeal continence.

Via a display of Song Dynasty (960–1279) ceramics and 1920s British studio pottery, ‘Modern British Sculpture’ reaches its midpoint: the horizontal figuration of Henry Moore’s Reclining Figure (1951), made for the Festival of Britain of the same year, and the vertical abstraction of Barbara Hepworth’s Single Form (Memorial) (1961–2), a monument to the sculptor’s friend, UN Secretary General Dag Hammarskjöld. For all their obvious differences in orientation and register, the two works share a concern with publicness that does not reemerge for the remainder of the exhibition. A reconstruction of an Exhibit, Richard Hamilton and Victor Pasmore’s 1957 ‘environmental construction’ of suspended Perspex panels, signals a number of once and future sculptural explosions (among them the pursuit of work that is temporary, fragmented, physically inhabitable, made collaboratively and sits at the intersection of previously distinct artistic disciplines). After this we are given one last, and perhaps surprising hurrah for the monumental in the shape of Anthony Caro‘s perennially extraordinary – and oddly pictorial – Early One Morning (1962). The curators’ accompanying wall text suggests that this sculpture goes some way to synthesizing the concerns of Moore and Hepworth, and that ‘it is in this synthesis that we might in retrospect see Caro’s masterpiece as marking the end of an enquiry rather than the beginning it has been taken for’. And after that end? After that end Curtis and Wilson gave us brilliant entropy: uncertainty, rubble and rot.

While the exhibition’s post-Early One Morning rooms contain everything from documentation of Marc Camille Chaimowicz’s scattering of silver shoes on London’s Albert Bridge (Shoe Waste, 1970) and the tentative social architecture of Liam Gillick’s Big Conference Platform Platform (1998) to the Brit-povera of Tony Cragg’s Stack (1975) and the fly-nibbled barbecue of Damien Hirst’s Let’s Eat Outdoors Today (1990–1), they make – from years of sculpture, from many small, tight curatorial arguments – one large, loose and audacious point. This is that, metaphorically or not, all of the certainties implied in the three terms of the show’s title withered and died on the shiny trellis of Caro’s optimistic essay in steel, dawn-red paint, and the sequencing of space. ‘Modern British Sculpture’ is an exhibition about confidence and doubt, sex and death. No wonder the newspaper reviewers were scandalized: few ‘looks back’ are ever this knowing, kinky and clear-eyed.