It’s a windy day outside of Mosul. The sound of wind, familiar from so many phone calls made on the street or news reports on extreme weather, is as mundane as the echoes of construction the microphone is also picking up: a truck reversing, machines moving building materials, faraway conversations in a foreign language (Arabic? Kurdish?). It’s 12:20pm on Monday 17 October, and I’m on Channel 4 News’s Facebook page watching a livestream of combined Iraqi and Kurdish forces as they advance toward Mosul, the last Islamic State stronghold in Iraq.

Later on, I’ll learn that the Iraqi Prime Minister Haider Al-Abadi has signalled the beginning of the offenisve (Operation Conquest / Operatio Fatah) earlier that morning and that broadcasters set up cameras in the closest safe zone to Mosul a week prior, and are planning on moving them forward as IS retreats. At 12:20 pm there are mainly tractors in view. There’s also dust, images of drones, tanks and people running across the screen. When I log on at work, between tasks and trying to hide the fact that I’m on Facebook from my boss, it’s pretty consistently tractors and people loitering around. 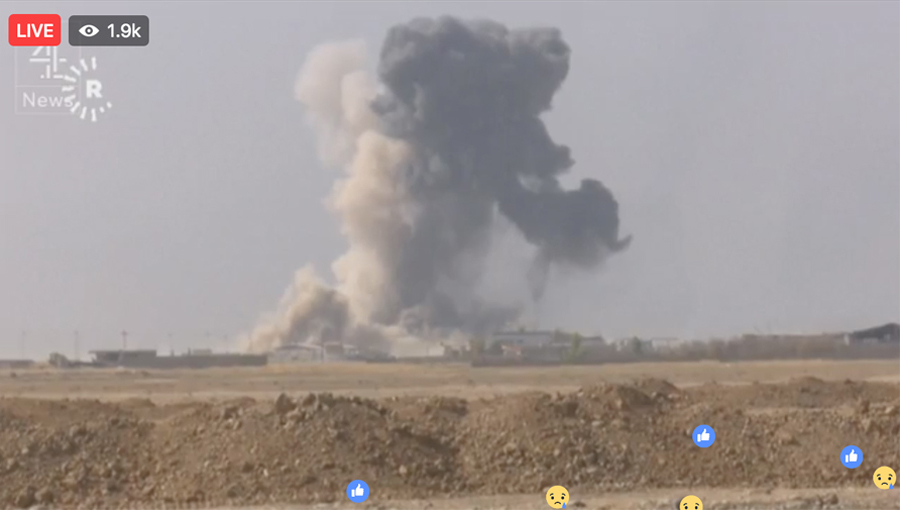 What are those tractors doing there? Are they building a safe zone for those escaping the city? Are they fortifying? Are they, in front of our eyes, physically drawing a new border? It’s a silent form of news. I try to understand what is happening, to place it geographically, to see if there are signs of war in the background. I look for drones or fighter jets in the sky. There’s nothing but the camera feed, no commentary, no voiceover: the only language surrounding the live feed is the comments section.

Staring at the comments feels like the old chatrooms of the 1990s, with single lines in an infinite vertical scroll. It also brings about the fears of old chatrooms: that you’ll see a raw, human response that you hoped to never be exposed to. ‘There was blood earlier?’ one comment reads. (And obviously, it’s one of the first I see.) The word offensive rolls on the tongue. Its military use fitting, as it is with another term: react. Facebook invites you to ‘react’ to the livestream and familiar emojis flow across the screen: a desert scene with uniformed men running above smiley faces, thumbs up, hearts and crying faces. 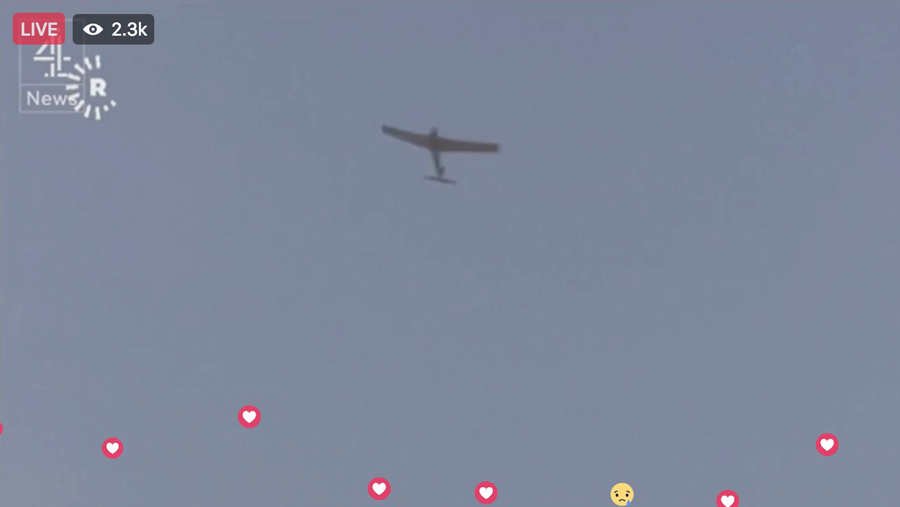 The headline of the Daily Mail soon after reads: ‘Channel 4 defends streaming the battle for Mosul on Facebook Live amid criticism it is using war as entertainment,’ which seems ironic from a website that actively disguises entertainment as news (‘Is YOUR phone spying on you?’). Conflating Facebook with entertainment or thinking of it as just a social media platform is incorrect; Facebook has much loftier ambitions. It doesn’t want to be just another website you visit, it wants to be the internet. So that everything around you that is networked (which in the near future will include your house keys and fridge, your entertainment, your work and private conversations) will be mediated via your Facebook account. That’s why Facebook has bought Oculus VR, chatting platform Whatsapp, and Parse, which has become one of the biggest Internet of Things projects.

And the news? Facebook centralizes information. It has signed deals with most major publishers to run articles via Instant Articles (that quick-to-load in-Facebook reading window, especially noticeable on mobile, that redirects you to the article your friend shared without actually sending you out of Facebook). Publishers can either sell ads on those articles and keep all the money to themselves, or leave Facebook to sell the ads in exchange for a 30 percent commission.

Here’s the problem with this, writes Michael Woolf: ‘Netflix will pay approximately $3 billion in licensing and production fees this year to the television and film industry; Hulu is paying $192 million to license South Park; Spotify pays out 70 percent of its gross revenues to the music labels that hold the underlying rights to Spotify’s catalogue. Now here’s what Facebook is guaranteeing a variety of publishers, including the New York Times, BuzzFeed, and the Atlantic, which are posting articles in its new ‘instant articles’ feature: $0.’ There’s the problem with entertainment. Not that Facebook is entertainment, but that Facebook promotes a two-tier content system where entertainment is streamed at premium prices and licensing fees, and text is offered up for free. This is news now. This is how Facebook Live is becoming a news outlet: journalists see Facebook as a partner. Channel 4’s livestream of Mosul is not entertainment – it’s the death knell of the financial model that has sustained journalism until now. 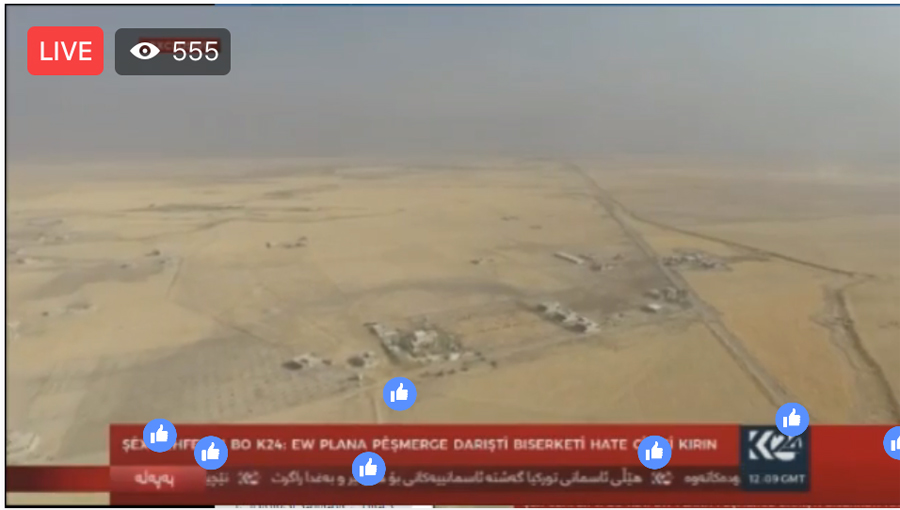 ‘Maybe the battle isn't happening today!!’ reads another comment. In the current issue of The Paris Review, there’s an essay by American novelist Ben Lerner, introducing a series of photos of Chris Marker’s studio taken by Adam Bartos between 2007–08, before Marker died in 2012. Though the photos were taken while the studio was still in use, they are empty. ‘What appears,’ Lerner writes, ‘appears to wait for the return of the human, but since nothing is as human as waiting, as the experience of duration that is boredom, I begin to invest things with feelings.’

On a Facebook feed, war is much slower than you’d think. To watch the livestream means to wait – that most human feeling – for what the movies had taught us was fast. On Facebook, of all places, we learn that ‘live’ does not mean ‘action’.

I’m watching with 2.3k others. Over the next few days, I learn that well over a million people viewed the attacks at some point in the three-hour livestream. Another Facebook comment rolls across my screen: ‘Live coverage of a war. We are doomed as a world.’ I look at Facebook the day after. It reads ‘Channel 4 News was live’. The video is slow to load and the thumbnail is of the press conference at its end, where a Peshmerga general explained the progress of the battle.

Nowadays we see so much that our relationship to images, moving images and the structure of the news, is reshaped constantly. Still, viewing the livestream is an uncanny experience: discouraging, painful, curious, demoralizing and impossible to look away from. Making sense of it and finding its utility is yet to come. It’s quite likely that after this novelty, Facebook users won’t know how to react – besides a thumbs-up or a sadface – to streams of the real world. That’s not what they are on Facebook for. But it’s also possible that this silent, long-duration viewing is so foreign an experience that it may mean a new form of proximity, or empathy. I cut Lerner’s quote above, just short of the end. In full it reads, ‘I begin to invest things with feelings. And then the things look back at me.’