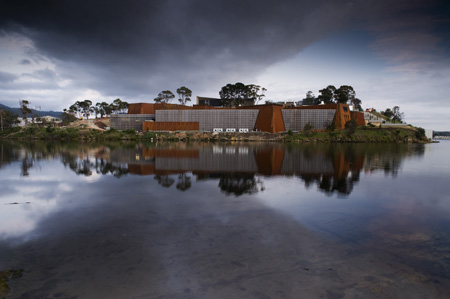 A fat red sports car, a turd machine, 150 vaginas, a truck, beer and a toilet with mirrors and binoculars positioned to facilitate an examination of your own anus: it all might appear to have been designed by an obscenely rich 14-year-old boy, but also woven throughout the Museum of Old and New Art (MONA), Tasmania, are moments of surprising thoughtfulness and nuance.

Seven years in the making, MONA opened in January to house the biggest private collection of art and antiquities in the southern hemisphere: that of professional gambler and Hobart native David Walsh. Founded on several oppositional principles (anti-didacticism, anti-orientation, anti-chronology, anti-compartmentalization, anti-coherence, anti-deification of artists), there is no signage and the galleries are deliberately difficult to navigate. Things reveal themselves gradually; the institution deserves time and multiple visits. Described by its atheist patron as a ‘secular temple’ and ‘a centre for worshipping the cynic in all of us’, the subterranean museum, designed by Melbourne architect Nonda Katsalidis, is cavernous and dim; the only natural light is in the peripheral pavilion housing Anselm Keifer’s violent lead, iron and broken glass sculpture Sternenfall/Shevirath ha Kelim (Falling Stars/Destruction of the Vessels, 2007). The surface of the sandstone rock that the building has been inserted into is left bare, as are traces of the former site, Walsh’s much smaller Museum of Antiquities, which was housed in a Roy Grounds-designed building. Signalling conversation rather than dictation, the museum’s disorienting layout is supposed to tell us that collective and individual knowledge and memory constantly shift; that history is not linear and ideas are never isolated.

In the unthemed opening exhibition ‘Monanism’, Neolithic artefacts, African, Mesoamerican, Roman, Hellenic and Egyptian antiquities, Australian Modernist painting and international contemporary art are displayed alongside each other. Permanently installed in an atrium-like space visible at various points throughout the museum’s four levels is Julius Popp’s mesmerizing Bit.Fall (2006–7): a loop of rapidly fleeting words are spelled out in falling drops of water before disappearing down a drain. Utility meets futility in Conrad Shawcross’s elegant kinetic machines (Loop System Quintet, 2005), and in Jon Pylypchuk’s dendrophilic assemblage you asked me to come and see your routine, you call this a fucking routine? (2006), which is as awkwardly hilarious as its title.

Upon entry visitors are given hand-held devices that track their location in the museum and tell them what they’re looking at, if they ask it to. Pressing the ‘Art Wank’ button can activate commentary on the work, audio interviews with the artist, or randomly generated background information. It makes for a rather insular museum experience, with everyone listening to headphones and attending to their gadgets rather than each other, but it works well to disrupt consensus, which is one of MONA’s objectives. For example, one audio interview amusingly reveals the confused gender politics behind the 150 life-size porcelain vulvic portraits Cunts … And Other Conversations (2008–9) by Greg Taylor, who seems upset to be told by his female interviewer that women aren’t disempowered in the way he insists they are and that his noble gesture of empowerment is redundant.

For all its gimmickry, baby-boomer obnoxiousness and self-conscious attempts at having attitude, MONA reveals zealous curiosity and sharp insights – with self-deprecating humour to boot. The museum is free but, for those who have it, spending money is very possible at the winery, restaurant and lavish pavilions along the river offering overnight accommodation. There’s also a cinema and concert stage, and while the library was unfinished when I stayed in early February it promises to become an important part of the museum. Though Walsh’s plans for an on-site abattoir, skate ramp and crematorium didn’t work out, devotees can, for a life-and-after-death membership fee of AU$75,000, elect to have their ashes stored at the museum’s cocktail lounge, next to the cremated mortal remains of his father.

is a writer and PhD candidate in art history, based in Sydney, Australia.