Music is a Better Noise 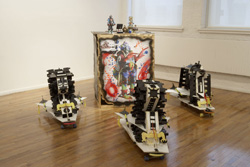 Cradling a barely lit cigarette and with his trademark guttural rattle, artist and musician Alan Vega fires invective at the crowd. Decked out in mustard-yellow and crimson drapes, the PS1 gallery-cum-medieval-pavilion provided a beguiling backdrop for the singer’s persistent hectoring. Given Vega’s legendary status as one half of the post-Punk duo Suicide, it is little wonder that he found favour, perhaps even reverence, among the crowd. In PS1’s downstairs Drawing Gallery, Vega’s legendary cruciform light sculptures – originally deployed as immersive environments for early gigs – flicker in their plastic toy and urban driftwood assemblage. Nailed to the gallery wall, they seem at a loss; shrines to a renegade activity and spirit long-since departed.

Such a relationship is at the heart of ‘Music Is A Better Noise’, whose primary focus of investigation was ‘musicians who make art and artists who make music’. This simply expressed framework was played out over three rooms in a video presentation, a group exhibition and a three-part harmony, of which Vega constituted one third. Alongside Vega hung the New York City pinhole photographs of former Y Pants musician Barbara Ess. At the other end of the room rapper Rammellzees’ wild-style-inflected Letter Racers (1997), exuberantly crafted from street detritus, sat on skateboard wheels.

Perhaps the most pertinent cohabitation of art and music was to be found in the single-screen video programme presented in the basement vault. The most successful of these works adopted and adapted the format of the pop video: the art work as codified advert. Recorded in a video-karaoke booth, Raw Sewage, fronted by Leigh Bowery, performed a camp version of the 1975 Aerosmith classic ‘Walk this Way’: an irreverent, hilarious and vital performance in which Bowery and his cohorts – Sheila Tequila and Stella Stein – strut, flap and prance in blacked-up faces, check dresses and pubic wigs, culminating in a wobbly pyramid of pasty buttocks. In Olaf Breuning’s Woodworld (1998) a parked car looms out of the forest night, complete with strobe lights, glitter balls and smoke machines. An epic Electro-Trance-Trip-Hop soundtrack booms from the car stereo as four hooded figures wave glow-sticks as the pimped-up phantom ride releases bubbles and feathers. Somewhere between art-school slide lecture and pop video, Mark Leckey and Jack-too-Jack’s March of the Big White Barbarians (2005) consists of a ritualized call-and-response between musician and static public sculptures in London that ends with the exasperated; ‘Everything’s been eaten. Everything’s been drunk. There’s nothing more to say, so I’ll just watch the big white barbarians passing by.’

The exhibition continued upstairs with Richard Aldrich’s painted Portrait of Throbbing Gristle (2002) and Meredyth Sparks’ photograph and glitter versions of Ian Curtis, Ian II and III (2006), spun against works by musicians Kim Gordon, Don Van Vliet (Captain Beefheart) and Devendra Banhart. Clearly ahead of the art and music pack, Christian Marclay’s inverted plinths Stereo Volume (1989) suggested the weight and solidity of noise, while the perforated black Guitar Case (1989) implied a violent leakage of sound. It was in such moments of exchange between disciplines using the shorthand material grammar of rock and pop that the show found its most unpredictable strengths. Jutta Koether’s Music (2006), from the series ‘Structural Necessity of Multiple Inconsistent Fantasies’, consists of leather jackets, cut-up credit cards and black chains frozen in a hanging mobile of clear lacquer. Performance is distilled in the cheap flutter of silver Mylar drapes and the charred grubby presence of a black blanket-cum-backdrop pinned to the wall.

More scrapbook than considered collage, Thurston Moore’s ‘Street Mouth’ series showed a young Brian Eno nibbling coyly at the frames of his black shades as he ‘cruises the Big Apple’, while a young Johnny Thunders, packing serious artillery in his PVC trousers, clutches an ice cream accompanied by a procession of snarling and smiling faces from Lou Reed and Sable Starr to Pete Townshend and Lester Bangs. As a series, they are most intriguing for Moore’s reading of a particular period in musical history. Gavin Russom and Delia Gonzalez’ Untitled (White Vanity) (2005), an abstracted white Formica vanity table, contains a speaker system that rattles through electronic triplets, a brief reminder that the poise and iconic cool of the musician can be equalled by the art object.

With noted exceptions this last room seemed strangely static, the energy of the musician and the gig reduced (rather than distilled) to impotent signs. What does an image of Ian Curtis with glue and glitter tell us? In part it is a world of neutered referents, overplayed records and outsize pin-badges that erode the arresting power of their source. Maybe that’s the point. In the main it pre-sents an introductory account of art and music’s frequent love affairs, shared desire and yearning embrace.