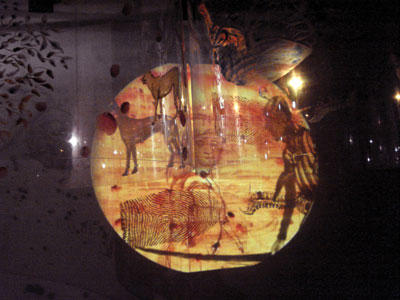 Detailed wall texts can provoke suspicion. The curatorial impulse to explain individual art works outside a catalogue begs questions about the supposed opacity of the works. In tandem, there is the suggestion of assumptions being made about the viewer. Nalini Malani’s exhibition of recent work at the Irish Museum of Modern Art (IMMA), her first solo show in Europe, highlighted these concerns because her installations of paintings, video and shadow plays were each accompanied by extended captions discussing the artist’s use of mythological and literary figures and her interest in feminist theory. Given that Malani’s work also addresses Indian history and traditions, one can wonder about IMMA’s idea of their audience: disinterested white men?

Sarcasm aside, Malani’s installations moved in many directions despite being stylistically unified through her fundamental concern with painting and drawing. The curators of this show might have been forgiven for attempting to mediate with explanation the experience of the work of a female Indian artist now being fêted in so-called international contexts. But questions and propositions, not answers or resolutions, ultimately provided the order of this exhibition. The many directions in which Malani’s installations move provided grist to the mill of interpretation, description and issues of context. A profound insight is offered by the recognition of the challenge of an artist who is ostensibly inside and outside a variety of traditions.

Paintings from the artist’s ongoing series ‘Stories Retold’ are a case in point. Here the figures of Alice in Wonderland and Medea and Sita are rendered as allegorical. Formally, the paintings suggest Sigmar Polke, early Paula Rego and Nancy Spero. Theoretically, fragmented narratives and Malani’s concern with revisionism bring us to issues of feminist interventions in history. Moreover, the fact that Malani paints on the reverse side of Mylar suggests a critical disposition to the act of painting. The expressivity of the artist’s brushwork is put at a distance, denying its fetishistic qualities for the copious amount of female bodies on display; and, in framing the very fact of expressivity, it treats the consequence of creative endeavour as a signifier rather than as an inevitable fact. Malani’s relevance for feminist critiques of artistic production is notable in this respect.

However, this is my reading, not the one proposed. A more straightforward description of ‘Stories Retold’ and other works, including Remembering Mad Meg (2007), would be as follows: Malani’s sense of composition recalls medieval painting and ancient, imaginative maps, and her sketchily rendered figures, from disparate mythological, literary and other traditions, variously pose, walk, sit and jump across a flat picture plane. Sometimes the background to the figures is monochrome; at other times Malani uses a grid structure or dots. Her paintings have a Pop appeal (think characteristic Polke), but this is offset by a sense of the grotesque, since the humans that occupy her universe often appear bruised and battered as they negotiate their way through what seem to be entrails, semen and various types of evil-looking creatures.

The video installation included in the IMMA show was altogether more didactic. Archetypal Indian images (cows, Hindu deities) were interspersed with fragments of the female body and introduced by a quote from the sociologist Veena Das on the relationship between women, violence and modern India. The shadow plays are her paintings projected, and the feeling here was carnivalesque, in terms of movement and a sensational sense of hybridity.

In the catalogue that accompanies the exhibition, art historian Chaitanya Sambrani proposes that Malani’s strategy of drawing on a variety of traditions and engaging particular constructions of gender identity is the consequence of her personal history. Malani was born in 1946, a year before Partition, and her family emigrated as refugees from Pakistan to India, where they endured cultural dislocation; and as Malani evolved as an artist, she reacted against the male-dominated world of Indian, though essentially internationalist, Modernism to seek out indigenous figurative traditions and avow a politics of the personal. Sambrani writes of the artist’s concern to ‘chart new maps of identification and reference a broader spectrum of historical, phenomenological, and psychological conditions’. The use of reverse painting is related to Chinese and Indian traditions that moved across sacred and profane imagery. Furthermore, a key influence is the late-19th-century painter Ravi Varma, who refashioned traditional religious and mythical subject matter for a modern audience.

My head is spinning. Sambrani writes that the artist ultimately transcends all the references evoked and that the fact of multiple interpretations is at issue. This is a reasonable assessment, but it is somewhat disingenuous about the challenge of Malani’s installations at IMMA. Somewhere between the eager wall texts and the avowal of open-ended meanings is the demand for a nuanced understanding of the terms of the works’ production and the relationship of the works to much broader concerns. This demand is central to the experience of the installations themselves, and not done justice to when
written away.