Soup kitchens, art-world satire and the legacy of BANK 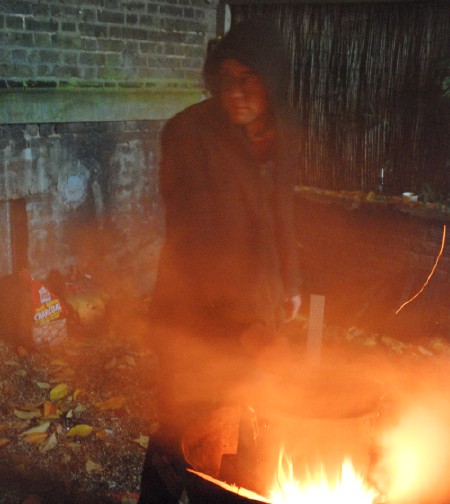 ‘You say you had a good Frieze? You say you shifted units? You say the credit crunch won’t effect your gallery? You say that sculpture is made of real gold? – NANG DON’T BELIEVE YOU!’ As the press release to the Nang Gallery’s soup kitchen for gallerists post-Frieze Art Fair, this bulletin was an assault on the art economy. Yet, although Nang Gallery and their associates have been regularly outspoken since the height of the market’s boom – a hectoring conducted with a certain amount of wit – after the recent financial crisis, it’s all too easy to point fingers, and perhaps their critique comes as too little too late. Either way, with members including Merlin Carpenter, Alastair MacKinven, Ben Waller (who also fronts the bands The Rebel and Country Teasers, and writes under the pseudonym Tony Pearsons), and Dan Mitchell (who runs the group’s cartoon publicity and produces the vividly pornographic Hard Mag), it’s interesting to ask if Nang are a group successfully reacting to the distortions of the latest economic catastrophe within a tradition of recalcitrant dissent.

Nang’s previous actions include ‘Islands of Glory in Streets Caked with the Faeces of Decadence’ (2005), which took place at a warehouse in De Beauvoir Town, north east London – the show contained a VIP room with magic mushrooms and poppers, and decayed paintings layered with shit from pigeons that populated the abandoned building – and ‘Do What Thy Wilt’ (2008), a Crowley-esque open submission show for struggling artists, inspired by the Saatchi online web link for viewing work, shown in a pre-demolition structure for luxury flats near Arsenal’s Emirates Stadium in Holloway, North London (or, as they term it, ‘North Shoreditch’, parodying the truth-stretching language of the capital’s estate agents). Events are currently held at an address on Talbot Road in Notting Hill (‘West Shoreditch’ according to Nang). The house is derelict and is a classic symptom of the times; an agent bought it in mid-2008 but subsequently pulled out in September. The unopened letters that have accumulated since then have been left scattered in the hallway, along with estate agents boards and luxury carpet swatches. The group have upped the stakes at this venue. ‘You Are Represented By Nang Gallery’ – a show of work by four London artists that allegedly dislike each other – was booked without the artist’s permission in November (the members of Nang found various objects in a local skip, nominated them as artworks and cheekily attributed them to the four artists in the exhibition). The cuttingly titled ‘A Powerful Optimism’ and ‘Artchitecture: Everything is 110% Opposite of What it Was’ took place in December. ‘A Powerful Optimism’, a solo exhibition by the painter James Michael, presented abstracts that dwelt on the economic buoyancy of the past ten years with ‘a critical distance’, while ‘Artchitecture’ used the empty Notting Hill building to turn Nang’s attention ‘to a self-critical mode and a dissection of CAPITALISM’; in the press release to this show they attributed a fictional quote to Gilles Deleuze – ‘Artchitecture, the house without an organ’ – perhaps to bring attention to the prevalent use of academic authority in publicity. A seventh project involving the creation of a Chinese sweatshop is set for spring 2009. Here artists run by a gang master will produce work in the building’s attic, a builders’ waste shute will be installed, and art works will be jettisoned down the shute to the ground floor for viewing.

During the November soup kitchen event, all of the works in the ‘gallery’ were attributed to J. Crit Hammond – a fictional student of Blinky Palermo – and were dragged out to feed the fire to the barbecue that heated the soup in the garden. So what, precisely, is the nature of Nang’s slate, other than being bitchy towards the local art community, gallery system or reprising well-worn attacks on the art work as commodity? We could relate Nang’s events to debates around recent economic critique, such as Melanie Gilligan’s Crisis in the Credit System (2008) (coincidentally Nang’s Dan Mitchell was a performer in this work) or Nina Powers’ writing on art’s ‘Nu-language’, New Labour spin and the notion of ‘creative industries’. Yet, if I were to be cynical I’d quote a friend who recently pointed out that it’s possible that Gilligan, NANG and Powers could simply end up becoming bad economists, rather than good artists or theorists. So perhaps the most important critical perspective Nang bring with them is the use of an intelligently infantile humour as a tool against the dry smartness of ‘experts’. Satire is healthy, and in this respect it’s worthwhile to ask if Nang are attempting to take up from where London art collective BANK left off in the late 1990s. If BANK mercilessly critiqued the art world with a relentless stream of exhibitions and printed projects issued from their gallery headquarters on Underwood Street, today their main members have developed surprisingly formal solo practices, either of an overtly critical (Simon Bedwell), affirmative (John Russell) or melancholy (Milly Thompson) nature. However, there are marked differences between these two groups, and from today’s perspective it’s interesting to note the fact that the various members of BANK didn’t have galleries to worry about when they working as a group, whereas certain members of Nang actually have commercial representation. It’s probably not surprising that biting the hand that feeds isn’t much of a concern these days; after all, having a part-time role as an enfant terrible can help sustain a critical and marketable frisson in an artist’s practice. Just look, for instance, at the recent nightmare fad in New York where Dash Snow and Dan Colen travelled a long way on the back of their bad-boy image.

If Nang and groups such as the younger and equally sporadic gallery The New Dome are to become the natural inheritors of groups such as BANK, then it’s clear what is needed is an increased self-examination coupled with an ability to turn a good sentence. Paradoxically, the limits of BANK’s own effectiveness was that they could only dwell on the machinations of the art world for so long until it got tedious for them. Nang’s strongest medium is the distribution of their provocative e-communiqués, which at the moment feature belligerently funny slogans and a deliberately awkward use of PhotoShop. However their publicity aesthetic falls slightly more on the side of pure aggression not least because it’s based on conjecture about its various subjects. The main problem is that it uses the fragmented language of collage – a once radical but now conservative and traditional vehicle for any artist with a rant. A smarter, more critically precise route is needed if Nang’s bite is really to be felt – a form of address that doesn’t lapse into the cleverness of either endless institutional reflection, the reworking of DIY strategies and the reanimation of ‘bad art’ aesthetics. In essence, this form of practice needs to become less of a part-time activity, and assume a different shape under a new guise. You say that NANG are breaking ground in critical practice? TRY HARDER – AT THE MOMENT I SIMPLY DON’T BELIEVE YOU!