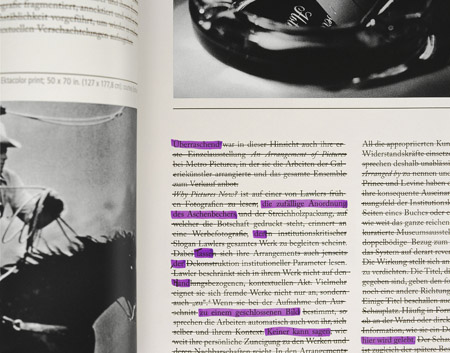 For her exhibition, ‘Je n’ai rien à dire. Seulement à montrer’ (I have nothing to say. Only to show), Natalie Czech found the words of great poets in random magazine articles the way a treasure hunter on the beach discovers coins and rusted bits of metal in the sand. Using a marker pen or highlighter, she isolates words, phrases, even single letters and punctuation from pages of old magazines and then photographs the results. The resulting extractions take the shape of poems by Rolf Dieter Brinkmann, Robert Creeley, e.e. cummings, Jack Kerouac and Robert Lax. Czech’s methodology, cloaked in the vague guise of rationality, is in fact nothing more than an aestheticized word-search. But it is this rather zany process – clad in the convincing guise of extreme precision and secret rules – that lends her pieces a particular potency.

This is work for the detail-oriented viewer. One could simply walk in and out and conclude that the exhibition is a conceptual one-liner that pulls one set of words out of another, but Czech’s photographs have a layered quality. To begin with, the works are enlarged, framed photographs of magazine pages, not the original objects themselves. This act of reproduction already sets up the found poems as semi-monumental objects. The equal partnership of poem and photograph means that both the words and the materiality of the page take centre stage. The sections of magazine containing the revealed texts are enlarged and cropped to focus on creases in the paper and the graininess of the now archaic printing methods – particularly satisfying is the seductive gloss on the bulge of the magazine at its spine, where it catches the light, forcing a visceral volume on this otherwise insistently literary endeavour. Czech usually uses highlighters and markers to discern the hidden poetry. In A hidden poem by Rolf Dieter Brinkmann (all works 2010), Czech plays with this by crossing out everything but the purple highlighted verses. A hidden poem by e.e. cummings #2 inverts this approach and leaves only Cummings’ words in their pristine printed condition.

Though the pages come from a broad spectrum of magazines – art, political and scientific – the poems that emerge from them refer to the surrounding texts. In A hidden poem by Robert Lax, for instance, the poet’s words – ‘Does every river run to the sea & is the sea a home for me?’ – are underlined within an article chronicling a sea odyssey. Despite this blatant metaphysical/metaphorical relationship, Czech deftly plays with the idea of secrets and disguised meanings like those found in the ‘Bible Code’ – a belief of religious fanatics that the letters of the Bible when transformed into numbers and plugged into important historical dates yield oracular prophecies galore. The problem is always subjectivity: one person’s truth is another’s gibberish. Czech’s works leave open the door of the asylum, so to speak: perhaps these poems actually do inhabit every piece of text ever written?

Like a good scientist exploring all the possible iterations of a process, each of the photographs follows a different avenue of discovery. Some even mock the whole operation: A hidden poem by e.e. cummings #1 presents the hidden text cut out and folded onto the verso, loudly declaring that the discovered words have literally no relation to their surrounding inky fabric. Perhaps the whole point of the exercise is to reveal the often pointless and inconclusive results that emerge from careful and precise academic research or artistic methodologies. Czech’s seductive prints of grainy ‘original documents’ subjected to her dubious yet lyrical processes discern the divine in the everyday, perhaps as palpably and convincingly (to the untrained eye) as vapour trails of invisible particles somehow coalesce to prove the existence of the hidden forces that hold the universe together.