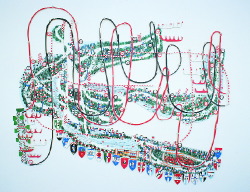 It is surely no accident that the title of Nathan Carter's second solo exhibition at Casey Kaplan, 'Shropshire to Speedbird Outbound: What's Your Actual?', has a whizz-bang but slightly old-fashioned air. Like Kraftwerk, forever Dusseldorf-bound on the Trans-Europe Express, Carter seems to reside not in the present, but rather in a technologically forward-looking version of the recent past. Uninspired by mobile phones and text messaging, he pines for the obsolete thrills of CB and pirate radio. In Carter's world there are no clear channels; all is interference and static, crossed lines and garbled code. It is a place that is, by his own admission, unmappable. But that doesn't stop him trying.

The artist continues to indulge a predilection for convoluted titles in the names chosen for the show's individual works, eight glued, screwed and painted plywood reliefs that image routes through and conflicts between a cluster of fictional territories. BRAVO DELTA TANGO OUTBOUND DUBLIN TOWER DID YOU ROGER THAT? WUN AIT DAYSEEMAL 9ER TREE (2003-4) (try reading it aloud) is a typical example, a chaotic network of paths weaving through, around, behind and over a land mass of unspecified scale and location. Red, white, blue and chequered strips tilt upwards like raised security barriers, allowing the safe passage of some vital delivery. Beneath them, a bustling field of smaller components suggest buildings and signs, entrances and exits. Some of these display tiny iconographic pencil sketches of telegraph poles, wires, gates and fences. The effect is of a conceptually sophisticated but identifiably home-made puzzle or board game, something like a cross between Risk and Mousetrap.

The title of KLM FLIGHT 923 DID NOT READ YOUR LAST SOUND SYSTEM BANGER APPROACHING GLASGOW CASUALS (2003-4) presents a curious set of references for an artist born in Dallas and based in New York, but the dash of urban funk it adds to the mix is intriguing. However, where we might have been expecting a Situationist-style cut-and-paste détournement of some inner-city labyrinth, Carter gives us a harbour scene that verges on the picturesque. Here his anonymous but apparently much contested cargo is transported by ship to and from a port pieced together from biomorphic shapes familiar from the paintings and sculptures of Joan Miró, Jean Arp and Alexander Calder.

In SHROPSHIRE TOWER TO ECHO LIMA KILO 6 9ER REPORTING EXCEPTIONALLY VIOLENT ACTUAL OVER (2003) Carter shifts the scene to what looks like a besieged ski resort. A series of blue points - which may represent people or simply positions - are connected by pencil lines along snowy white paths bordered by generic fir trees, stamped out potato-print style in primary green acrylic. These are interrupted every so often by the splatter of an explosion and a plume of grey smoke. A set of heraldic shields ranged along the bottom of the work hint that the conflict may have originated in some sort of familial rivalry, but the details and outcome of the attack remain a mystery.

Writing about Carter's last solo outing at Casey Kaplan in 2001, Roberta Smith wrote that his cheerful, hobbyist aesthetic was 'seemingly bent on parodying masculine excess', and her characterization remains accurate. It is difficult indeed to remain Serra-faced in front of something that looks like a prototype for a new Scalextric racetrack designed by Dr Seuss, entitled FAEROES SOUTHEAST ICELAND GALE 8 OCCASIONALLY SEVERE GALE 9 EPIC PROBLEM ON RADIO 4 (2003-4). Perhaps the contrast between Carter and the rest of the gallery's stable, most of whom tend to be more visually restrained and less technically hands-on, is a contributing factor, but no such context is required in order to enjoy getting tied up in Carter's exuberant loops and whorls. More useful might be a familiarity with Spaghetti Junction or the Tokyo underground system, the Tour de France or the Le Mans 24-Hour Race.

The apparent structural precariousness of works such as RADIO FREE SARAJEVO IS REPORTING ANTI-CYCLONIC GLOOM 6 BECOMING GALE 9 VISIBILITY MODERATE (2003) makes their sense of rapid movement that much more convincing. It is as if we are constantly on the verge of being derailed or skidding off a mountain pass. Yet there is a strong sense of design on display here too, which allows the artist to keep his compositions under control even when the layers of information and pseudo-information that they contain are stacked up like crates on a barge. Carter's world may be overrun by warring neighbours, criss-crossed by bad lines and fraught with danger, but that doesn't make it somewhere to avoid.