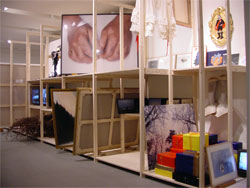 An asterisk adorned the somewhat terse title of Nedko Solakov’s exhibition at Kunsthaus Zurich: ‘Leftovers*’. Visitors to the show were given an explanation of this as they entered the museum hall. On the wall facing them, in Solakov’s own handwriting, were the words ‘*a selection of my unsold pieces from the private galleries I work with’. The subtitle is a succinct and precise definition of what the Bulgarian artist gave his audience to look at; but it scarcely reflects the density and complexity of the questions this project raises for the art world.

When invited by Kunsthaus Zurich (which sees itself as one of Europe’s leading art institutions) to put on an exhibition, not in one of its main exhibition halls but ‘only’ in its print room, Solakov reacted with characteristic understatement and irony. Yet even in this rather cramped space he succeeded in putting on a retrospective of his works, focusing on the last decade, in the form of a compact new installation. But the show was also a miniature one-person art fair, with seven galleries from Berlin, Paris, New York and other cities caught up in the tentacles of the global art market, taking part. It was from the storerooms of these galleries – which we like to imagine as dusty and chaotic – that the show’s curator, Mirjam Varadinis, in consultation with Solakov, selected the 99 ‘leftovers’ for Zurich: art market remnants, works that have yet to find a buyer but which remain potential economic assets. So, as well as highlighting the precarious status of the art work as a commodity, Solakov was also raises the question of the relevance of a museum exhibition for a ‘mid-career’ artist. In addition to being a good opportunity in purely artistic terms, for the artist (and his dealers) such a show also represents a potential business opportunity, a chance finally to place even these unclaimed works. The way Solakov tells us all this is funny and inspired, because it is so shameless and direct.

The artist transformed the exhibition space itself into a storeroom. He had a simple wooden shelving structure installed along a wall that divided the hall into two, and on this he arranged his works in staggered formation. This structure functioned both as a proto-art-fair cubicle system, organized by gallery, so that each work could be assigned a colour and a reference number, enabling visitors to consult detailed documentation (including market prices) in the catalogue positioned near the entrance. As well as Solakov’s own writings about his works, this publication also featured pictures of the way the works were originally installed – in other words, how the ‘leftovers’ were actually supposed to be shown. And, as always, there were Solakov’s scribbled commentaries interspersed between the shelving units, the DVD covers of a limited edition, the nicely framed drawings and the large-format paintings carefully deposited on sponges: sometimes ironic, sometimes wistful or just plain informative statements about the objects on show. The result was reminiscent of the best organic food shops, where the label offers customers not only reliable information about each product’s origins and tips on what to do with it but also a photograph of the bull whose choicest cuts they will be enjoying that evening.

Solakov’s leftovers included some of his finest works, such as A Life (Black and White) (2001) – which involves gallery walls being repainted continuously in black, then white, then black and so on – or TOP SECRET (1989–90), which chronicles his life in the form of index cards. The viewer was left wondering whether the artist simply cannot bear to part with them. Does he have an overriding emotional bond with these works? Or do they represent mere financial speculation, some form of a pension plan? The 99 works on display had, the show told us, a total value of 2,830,650 Swiss Francs. By now, of course, they are probably worth more – thanks to the Kunsthaus, but above all thanks to rising oil prices.