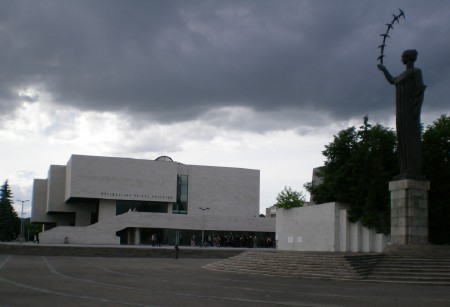 In the final week before the opening of the National Gallery of Art of the 20th and 21st Century (NGA) in Vilnius last weekend, Romualdas Budrys, Director General of Art Museums in Lithuania (an art czar position like that of Sir Nicholas Serota at Tate), embarked on the redirection and re-hang of the permanent collection exhibition, pragmatically titled ‘20th-Century Lithuanian Art’. He made this decision at the expense of two years of scholarship and hard slog led by Lolita Jablonskiene (head of the NGA) and her team. News of these events was quickly met with shock by Lithuania’s tight-knit art community. The result is reminiscent of the Brezhnev-era all-Republic survey exhibitions. The ten collection galleries (a combined 2,200 square metres) are crammed with approximately 400 works, despite being a space in which 250 would be appropriate. In a foolhardy attempt at democratization, no single work is highlighted or given a feature wall or space (in Soviet times every state-recognized artist had at least one work shown in the annual show). The thematic course of the exhibition has been overridden: each of the ten halls, starting at 1900, were to be hung according to ten themes in roughly decadal sequences such as ‘Polish Vilnius1918–1939’ and ‘The Khrushchev Thaw 1953–1964’. Photography is shown in a single sequestered hall; a hangover from photographic artists having had their own union, galleries and annual exhibitions. And sculpture is understood as mid-sized objects that stand on chest-height plinths abutted to the wall: nothing is free-standing.

Problematically, it tarnishes the public’s view of the work of the NGA staff and contributing curators. Many will have seen the projects Jablonskiene – one of Lithuania’s most respected curators – curated for the 2007 Moscow Biennial or Jonas Mekas’ pavilion she co-commissioned for the 2005 Venice Biennale. Sadly, the likes of Budrys and the apparatchiks who run culture in Lithuania don’t read frieze.com, so there’s little chance of this criticism hitting home. Those who do can accuse me of bias because of my friendship with Jablonskiene. What the heck. This exhibition has seriously hindered a celebration of Lithuanian culture’s long march into the future.

Because of the man hours wasted on the re-hanging some other elements of the building are some way short of being 100% operational. The building still lacks the planned architectural signage and information to help visitor orientation, the interactive info lounge and sculptures for the contemporary sculpture courtyard, while the relocation of the ‘Contemporary Art Information Centre’, a valuable research library and collection to the new building, has yet to happen. Though installation will be completed by the end of this week, at the opening these absences made the transitional spaces and entrance area feel hangar-like. Despite these shortcomings, everyone understands the opening is a high-watermark for culture here. The consensus amongst supporters – of both the NGA and the new vision of Lithuanian art history its staff has been preparing – at the three different openings was that the institution is a ‘blank canvas’ that we can watch develop and grow with positive anticipation.

The building is a reconstruction and extension of the Soviet ‘Museum of the People’s Revolution’ that has beautiful modernist spaces to rival any world institution. (The principal facade and footprint containing the permanent collection galleries and foyers belong to the original structure of the Soviet building designed in the 1960s). Re-designed by Lithuanian architects Audrius Bučas, Darius Čaplinskas and Gintaras Kuginys, the building integrates five interlocking cubic volumes that contain 12 galleries ranging from 150 to 1,200 square metres, as well as four permanent black-box spaces for video work.

Sited in the largest space, the temporary exhibition produced to mark the inauguration is equally praiseworthy. ‘Dialogues of Colour and Sound: Mikalojus Konstantinas Čiurlionis and his Contemporaries’ is a contextual and thematic exhibition about Lithuania’s ‘lost modernist’, a painter and a composer working at that moment when a number of his contemporaries – including Wassily Kandinsky, František Kupka and Edvard Munch – were generating cross-disciplinary and existential theories of art. Developed by Czech art historian Vojtĕch Lahoda, Lithuanian composer Šarunas Nakas, and curators Osvaldas Daugelis and Rasa Andrušyte-Žukiene, the exhibition breaks new ground in tracking both Symbolism’s early years and affinities between colour theory and music in art produced in Scandinavia and Central and Eastern Europe. Impressively, the exhibition gathers loans from 21 European museums and assembles the largest number of many different artists’ works, such as Czech painter Kupka, ever seen on public display. Elegantly installed and explained, and with an interactive suite where visitors can see digital animations of Čiurlionis’ scores while listening to his music, ‘Dialogues of Colour and Sound’ is pitch-perfect.

Ironically, the second large-scale international exhibition coming to the house in autumn is the touring V&A exhibition ‘Cold War Modern‘. Considering the events surrounding the opening, this staging of ‘Cold War Modern’ in Vilnius will come off as historical exhibition-making on-the-edge, as its critique of the socio-political agency of art and architecture, and the communist mentality, during that era are prevalent to analysing the stymieing of the advancement of culture in Lithuania today. There’s hope for the NGA yet.