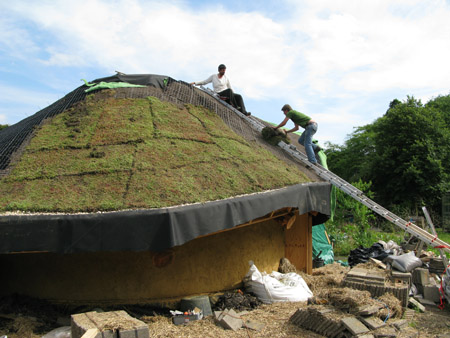 What does it take for a fruit and vegetable garden cultivated on an outlying city farm to be considered an art work? A title, for one. Commissioned by Stroom Den Haag as part of its wide-ranging ‘Foodprint’ programme (2009–ongoing), London-based artist Nils Norman’s Edible Park (2010) joins the ranks of alternative community gardening projects with tantalizing names like ‘edible schoolyards’, ‘edible playgrounds’ or, for that matter, ‘edible estates’. These visionary gardens, inspired by the socio-ecological ideals of permaculture – a system that promotes sustainable, community-centred agricultural design – do not always quite live up to their name. They are ‘edible’ to the extent that everything grown in them is potentially a source of food, but no more so than in, say, your average allotment.

As if to mark the contrast in their rival aesthetics and ethos, Edible Park is intended for communal use, unlike the individual city farm allotments in the Zuiderpark next to which it was set up. Instead, Norman’s park emphasizes gathering places, such as the purpose-built ecological pavilion in its midst. Horizontal strips make the garden – with its succession of straw-covered, fruit tree-bearing mounds rising from the ground like so many islands – appear at first somewhat unruly. Cabbage heads, sorrel leaves, mint and potato bushes blend together, fringed by spindly corn, flowers (of the edible variety, naturally) and a squash lying here and there amid the foliage. In fact, the layout of Edible Park obeys a rigorous logic, radiating as it does from the straw-bale round house at its core. Dwarf fruit and nut trees form nuclei around which culinary, medicinal and aromatic plants grow in layers, providing a habitat for insects and animals. A predilection for circular shapes and concentric patterns is characteristic of Utopian landscapes and architecture, which loom large in Norman’s practice. The transparent dome that allows light to seep through the beamed, turf-covered roof of the round house gestures toward the Glass Pavilion built in 1914 by another Utopian visionary, the German Modernist architect Bruno Taut.

Aesthetic considerations aside, Norman avails himself of Utopian thought to test the practical validity of localized public interventions; hence the significance of the ceremonial unveiling of the Zuiderpark site in October 2010, under the auspices of a city councillor. In a gesture fraught with symbolism, the keys to the pavilion were handed over to a local gardening association, Gezonde Gronden, who henceforth took full responsibility not only for the garden’s upkeep but also, crucially, for running the educational programme aimed at local residents and schools. The idea being that anyone could come along and learn how to grow vegetables and fruits in their own city according to the principles of permaculture.

Bringing artists, designers and architects into contact with local communities, schools, farmers, and city officials in a bid to develop imaginative and viable alternatives to conventional urban planning is one of the goals of Stroom Den Haag’s ‘Foodprint’. The programme, complete with a manifesto of sorts, takes the lead from architect Carolyn Steel’s Hungry City: How Food Shapes Our Lives (2008), which advocates for the return of food production to the city. Although firmly rooted in the local environment of The Hague, from its inception ‘Foodprint’ has attracted international collaborators whose practice revolves around the ‘influence food can have on the culture, shape and functioning of the city’.

Time and effort are required for such initiatives to bear fruit (in more ways than one). The official opening of the pavilion in October was followed, appropriately enough, by a feast; yet it was too soon for the cornucopian spread of tasty wholesome dishes, served by picturesque mothers with babes in arms, to have come from Edible Park itself. Owing to local volunteers who have continued to use it and care for it, the garden has since grown and even started to spread, exactly as Norman hoped it would. Local authorities in the Zuiderpark district have shown their willingness to collaborate with Stroom Den Haag on setting up additional permaculture gardens modelled on Edible Park – a measure of the work’s success and of the ‘Foodprint’ programme as a whole.