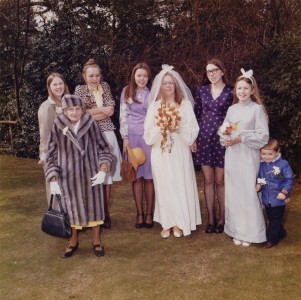 In his exhibitions ‘A Paradise Lost: The Neo-Romantic Imagination in Britain, 1935–55’ (1987) and ‘The Sixties Art Scene in London’ (1993), and in their accompanying publications, David Alan Mellor established an art-historical understanding of the relationship between British society and visual culture as the latter found its way from British Modernism’s renewed engagement with landscape, mysticism and history in the mid-1930s to what was effectively the echo of those themes within the impact of the break-up of The Beatles in 1970.
Now, in the lavishly illustrated tie-in publication to his touring exhibition ‘No Such Thing As Society’, Mellor extends the course of this brilliantly detailed and narratively vivid history of Britain’s visual culture. As the photographic material surveyed here seems mostly to occupy a tense, almost archetypally British position between gentle comedy, fatalistic resignation and louring portent, so Mellor’s analysis of these images, and the circumstances that led to their making, reveals as many aesthetic treasures as it makes bravura connections between theme and incident.

The terrain is political, with regard to both personal and social identity. Within these images time telescopes: a group of teenagers photographed in Newcastle in the early 1980s – the era of The Human League, in pop terms – has the air of a street gang from the 1940s. Community appears under siege; the sense of an English civil war that threaded through the Social Realist end of Punk can suddenly be seen in these desperate images as a historical reality, the sites of its sorry skirmishes now long buried beneath the contemporary consumer mono-environment.

Mellor introduces his subject as ‘marked by a contest of strategies. These sought to represent national identity, the face of regional and ethnic communities, as well as continuing the unfinished agendas of Social Realism, documentary and the cultural promises of modernization.’ And from such a point of inquiry, as it relates to the photographic collections of the Arts Council and the British Council, Mellor thus restores a forceful, disquieting sense of the present to the past; in addition to which, in a dizzying display of cultural–historical map-making, he manages to recount how myriad themes and concerns found expression within the photography of the period. He both establishes a new understanding of recent Social Realism and also – with particular reference to the careers of Martin Parr and Paul Graham during the early 1980s – sets in place the prehistory of contemporary British art’s complex rearrangement of aesthetics, intentionality and politics, as it has subsequently been extrapolated in the work of artists as different as, say, Phil Collins, Gillian Wearing and Jeremy Deller.

The title of the book and exhibition – drawn from Margaret Thatcher’s remark in 1987 to Woman’s Own magazine that ‘there is no such thing as society’ – might easily have become one of the truisms of cultural history, up there with ‘never had it so good’ and ‘the swinging sixties’. But as surveyed by this formidably dramatic collection of photographs, and the fluent scholarship of Mellor’s accompanying analysis, the contemporary viewer and reader are shown recent British history with a clarity, verve and compassion that might easily rank with the political journalism of Charles Dickens or the new documentary filmmaking of Free Cinema. A past world is brought to life, and its inhabitants appear to look back at us across the years – most often, strangely, touchingly – with what seems like a kind of forgiveness. And so this is essential reading.