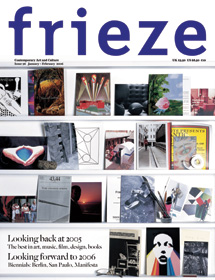 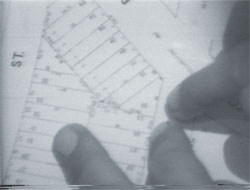 If there is one thing that unites all New Yorkers, it is their universal obsession with real estate. The confluence of limited physical space, unlimited greed, rampant speculation and headlong development has not only produced a common culture that values physical space as the ultimate commodity but has also resulted in some truly odd realities on the ground. As the city ballooned, rural lands with their meandering roads and irregular property lines quickly succumbed to competing developers who laid down often contradictory tracts of street grids oriented not to topographical reality but so as to facilitate the transformation of parcelled dirt into profit. The city that sprung up did so with overlooked spatial paradoxes: tiny, useless spaces belonging to no one; anomalies that few realized were there, embedded like mutations in the urban genome.

In the early 1970s Gordon Matta-Clark discovered that the city, sliding towards fiscal ruin, was publicly auctioning off these slices and slivers of ownerless land. The prices were nominal to the point of being symbols of municipal pathos, ranging from $25 to $50, with property taxes equivalent to a few rides on the subway. Matta-Clark bought 15 of these ‘odd lots’ (14 in Queens and one in Staten Island) sight unseen. As he envisioned it in 1973, the project he punningly termed Reality Properties: Fake Estates would consist of documentation of these urban voids – maps, photographs, surveying data and inventories of the forlorn botany found there – and the title deed for the ‘remote’ property itself, which the purchaser of the art work would then own. In many ways Matta-Clark was applying Robert Smithson’s principles of site/non-site to the forgotten, miniature wastelands of a decaying metropolis. Less actual places to be exploited and developed, they were desert islands of cracked, weed-choked concrete quietly adrift behind people’s aluminium-sided homes, ownerless parallelograms of invisibility, strips of ‘gutter space’ 100 feet long but narrower than a person’s shoulders. Their liminal existence outside the city’s rational grid could be contemplated and relished at a remove.

Matta-Clark amassed an archive of deeds, maps, photographs of every inch of his lands (the posthumous composite collages of these photos look like aerial surveys of some distant planetary surface), tax receipts, videotapes and other documents, but died of cancer in 1978, before he could do much with it. In unearthing his archive and organizing this two-venue show, the exhibition’s curators – Cabinet magazine editors Jeffrey Kastner, Sina Najafi and Frances Richard – succeeded in bringing to light a more nuanced side of an artist too often reduced to the chainsaw-happy ‘anarchitect’ caricature. What emerges in the historical segment of the exhibition at the Queens Museum of Art (located near several of the lots in question) is Matta-Clark’s complicated fascination with how value adheres and dissipates in its relation to space and materiality, and how the perception of ownership or its absence changes our psychological relationship to geography. Seen in a rare video touring his ‘fake estates’ in 1976, the artist looks like an absurd absentee landlord, trying to survey his ludicrously tiny wisps of territory with compass, tape measure and camera in hand. Pacing off one long wedge of pavement that narrows from six feet to one before petering out at a crumbling kerbside, Matta-Clark can be heard cheerily observing ‘this one has a good view’. He discovers that there is precious little ‘there’ there, but that, according to the City of New York, he owns it. He clearly gets a palpable buzz from the experience, a simultaneously real and illusory contact high of possession.

After Matta-Clark’s death, ownership of his mini-fiefdoms reverted to the city for non-payment of taxes (among the artefacts on display are notices demanding payment of $1.83 or $7.32 – sums smaller than the paperwork costs involved in repossessing the land). As the curators discovered in their research, there exist significant discrepancies, both in his own writings and among his contemporaries’ recollections, about what exactly Matta-Clark ultimately planned to do with the project. Some argued that he intended to have fellow artists create site-specific works for the various plots. Others insisted that the work was essentially complete.

Without necessarily taking sides, the curators invited 19 artists, including Helen Mirra and Dennis Oppenheim, to make speculative proposals and projects for the Fake Estates lots, which were shown at White Columns, the now venerable alternative space originally co-founded by Matta-Clark in SoHo in the 1970s. While some participants approached the brief in a somewhat literal, if whimsical, vein – Mark Dion’s detailed scale model of a subterranean Fake Estates museum located below one nondescript lot, for example – others seemed to tap in directly to the nebulous nature of what drew Matta-Clark to the project in the first place. Not surprisingly, Francis Alÿs, another artist captivated by the hidden-in-plain-sight incongruities of urban space, offered a photograph of a narrower-than-narrow structure in a Mexican town that had evidently once been sandwiched between two much larger flanking buildings, now demolished. The slip of a shopfront was itself erected on what had once been a tight rural passage for sheep or goats being herded between two abutting parcels of land. The stand-alone mercería, selling buttons and thread, was the only physical vestige of what had been negative space between two ephemeral embodiments of property.