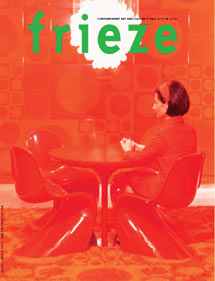 Olaf Breuning's latest video environment Woodlands (1998/99) was shown first at the Kunsthaus Glarus, and subsequently installed in a slightly extended version in Geneva. The term 'woodlands' evokes mediaeval forests, national parks, the Romantic stereotype of a dark forest in the howling wind and the artificial creations of Hollywood and Disneyland.

Visitors to Woodlands could choose between two narrow entrances, dark corridors that gave no hint of their destinations. The left-hand corridor, filled with the sound of wind and simulated fog, seemed to snake along forever, its nooks and crannies occasionally lit with diffuse disco lights which shone through cracks in the wooden panelling. In the innermost cavity, a projection of a grotto made from wood, gravel and polystyrene reconciled a hi-tech approach to art-making with traditional nature fantasies. In the centre of the bright image was a Range Rover, occupied by shadowy masked passengers. It gradually became apparent that the seemingly static projection was actually a video which included some rather unspectacular and seemingly effortless effects from wind machines, loud water surges and wandering torch beams that swept across the car's interior. A cross between stage magic and body based installation, this scenario recalled the Hollywood studio theme-park presentations that reveal the construction of special effects in popular films. It was also reminiscent of countless images in film, advertising and art that emphasise the increasingly unassailable status of media reality. The fake becomes second nature.

The right hand entrance - the 'wooden way' (in German idiom, the wooden way is always the wrong one) - ends abruptly in the white cube of an empty exhibition space, dispelling any techno-Romanticism that may have lingered from a stroll along the left-hand path.

Finally, isolated in a small gallery, hung a group photograph of actors lined up in front of a Range Rover. This effect echoed Bertholt Brecht's strategy of revealing the machinations of his stage-craft and exposing the characters as actors. Breuning, however, displayed the artificiality of his scenario, without offering Brecht's ideological framework - lifting the magic spell while refusing to give the trick away.

The way back through the branching, confined corridor to the outside world became a performance by the audience, twisting rather than revealing the constituents of the exhibition's mystery. Matthew Barney may be a central reference for young Zurich art, but Breuning's work breaks through Barney's near complete separation of film images and installations made from props, opening up whole adventure worlds which oscillate between reality and illusions of reality.

Translated by Eichler and Niermann