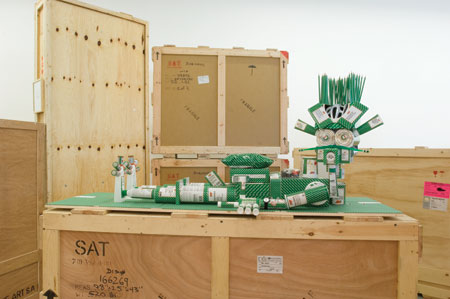 Following a six-year hiatus, Olaf Breuning returned to the art institutions of his native Switzerland with this major solo exhibition, which included photographs and videos, drawings and sculpture. Re-appropriating the crates used to transport his works to the show, the artist divided the museum’s main space into a series of smaller units. At the centre of each of these improvised rooms stood sculptures positioned on tables or plinths, with large-format photographs and small drawings – hasty sketches testifying to a vast number of largely unrealized projects – pinned to the surrounding crate–walls. Elsewhere, in one of the photographic works, Can someone tell us why we are here? (2006), a group of people wearing paper bags over their heads and cardboard boxes on their hands, feet and torsos are arranged so as to spell out the question of the title – the boxes on their bodies being each marked with a block capital letter. Apparently stranded in a backyard, these people now seem to be seeking an explanation for their predicament.

While here humans were turned into deadpan objects, there were also numerous anthropomorphic objects, drawing on the archaic custom common to many cultures of giving a human face to practical items and tools: lively-looking food sculptures entitled Eatmes (2007) sat on a dining table with ornately turned legs: made of pasta, vegetables or cheese, these creatures awaited us with friendly expressions, but seemed unlikely to provide any answer. Breuning also brought to life an unassuming assortment of decorative ceramic vases and jugs (The Collectors, 2007) by adding self-adhesive eyes, the title evoking a gaggle of art collectors who fix us with their plastic eyes, a creepy-yet-funny group tableau.

The second part of the exhibition consisted of a projection of Breuning’s new film, Home 2 (2007) – the sequel to his video diary of a travelholic jet-setter (Home, 2004). However, unlike the first instalment of the film, in which the narrator–protagonist recounts his story from a hotel room, this time we follow him to what seem to be Japan, Papua New Guinea and the Swiss Alps. The protagonist has a particular fondness for playing dressing-up tricks with the locals, usually preceded by the promising announcement: ‘I’m gonna meet the natives!’ The scratched surface of the celluloid appears to indicate that the film is somewhat dated, and in the background we can hear the rattling of a film projector; yet Home 2 was shot using only digital equipment with various effects added later. The masquerade begins, then, with fake material and continues with the protagonist’s predilection for donning masks in the literal sense. In Papua New Guinea he meets the natives wearing a gorilla costume head and an AC/DC T-shirt, while in Japan he persuades some passers-by to pose for a group photo with him wearing a cat mask. This globetrotter lovingly embraces all peoples while on his travels, but his ostensible desire to understand other cultures is little more than a game for him, and ultimately the chief purpose of his travels is to provide a constant boost to his ego. ‘OK, there is some cultural significance ...’, he declares rather vaguely at the end of his journey: despite having seen everything with his own eyes, he understands nothing. The near-pathological reflex of wanting to establish a harmonious unity with all people and with every corner of the planet leads to total alienation.

It is hard to identify in any way with Breuning’s sculptures and film characters because the relation between subjectivity and objecthood is in constant flux: the actors seem mechanical in their delivery, while the grimacing faces of the sculptural objects are disarmingly convincing – an effect the artist stretches to the point of grotesque ghostliness. Individual elements could be said to be very close to the works of Peter Fischli and David Weiss, whose penchant for popular clichés and edible materials can be seen in pieces such as Wurstserie (Sausage Series, 1979). Breuning also shares the gallows humour of artists like Urs Fischer. But with his actors Breuning takes us considerably further into the contradictions of his own position within the Western contemporary art world: problems of human existence are seemingly addressed, but, one often wonders, on the basis of what lived experience? With an undeniably self-ironic undertone Breuning confronts us with the consequences of a media-modelled, Pop-culture society.