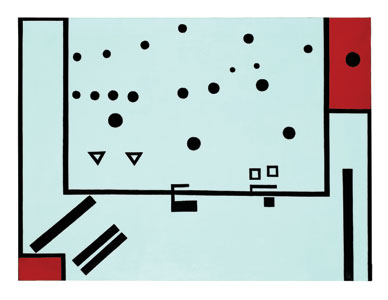 ‘Greetings, my friend. We are all interested in the future, for that is where you and I are going to spend the rest of our lives.’ Although these lines were actually delivered by the infamous psychic The Amazing Criswell in the opening moments of one of the dorkiest films in history, Edward D. Wood’s Plan 9 from Outer Space (1959), they could just as easily have been spoken by Olle Bærtling, whose life reads like the script for the Utopian idealist of all time. Art historians first mention him as a ‘self-taught painter’, a ‘hobby-painter’ and a ‘Sunday painter’ who left his position as a currency trader at Stockholm’s Skandinaviska Banken to pursue life as a modern artist. His work, naive to Swedish eyes, was frequently patronized: ‘pictures by the banker’, critics said. But he went off for a time to Paris, where he associated with Fernand Léger, Victor Vasarely and Auguste Herbin. In 1961 he participated in an exhibition about ‘Space Age Art’ at the Liljevalchs Konsthall in Stockholm, and later travelled to New York, where he gained the admiration of Lawrence Alloway and Donald Judd. ‘Where is Bærtling?’ Judd once pouted in a review, longing to have more sophisticated artists around. In 1964 his work appeared in the Guggenheim Museum’s International Award exhibition, a global survey of important contemporary art, and by the time he died in 1981, on the eve of his first retrospective at the Moderna Museet, this one time hobby-painter had been given 17 solo exhibitions in the USA alone. All Utopian idealists imagine that life will exceed their dreams, but Bærtling’s actually did.

There is an endearing 1951 photograph of Bærtling on a bicycle in his studio surrounded by his earliest abstract paintings (taken while he still worked in the currency trade), in which his deadpan air is reminiscent of the actor Peter Sellers. Read Bærtling’s account of the modern artist’s mission to fashion the sublimely immaterial – ‘the artist only has to do with the inner reality, the forces that direct everything, invisible, yet nonetheless humankind’s biggest source of energy and true reality, the prerequisite for all progress’ – and perhaps Sellers’ role as Chance the gardener in the film Being There (1979) will come to mind too: the innocent character whose simple phrasing begs to be decoded as an allegorical statement of deep wisdom and insight.

Later, Bærtling’s paintings, such as Xrek (1973), Ksiru (1976) and Ksird (1978), become variations of vividly coloured acute triangles (yielding optical effects) extending beyond the edge of the frame, perhaps implying a metaphysical space beyond. In many respects they are an astonishing visual fulfilment of the deep-seated priorities of modern painting. At their low ebb they can become illustrations for his brand of psychological imaging: ‘This new form of art is spatial,’ he wrote, ‘expressing itself through forces. The painting becomes a part of the universe, a sun, a power centre broadcasting its poetic message. It is immaterialized, existing only as a spiritual manifestation.’ Bærtling was surely influenced by the pragmatism of American Post-Painterly Abstraction, but until the end he held tight to his idealist visions, which were habitually associated with prewar European abstraction. Judd did just that, writing about a 1964 Bærtling exhibition in New York: ‘On the whole, Bærtling’s work is still too near the older geometric painting.’ A year later Frank Stella would tell David Sylvester: ‘As for the transcendental or metaphysical things, I just simply don’t understand them, and I’m honestly not interested in them.’

In one way, then, orphaned by the uncompromising dogma of Minimalism and literalist painting in New York, Bærtling was on his own. But is it sufficient to say that he echoed the ‘older’ painting, and leave it there? I would rather think that Bærtling’s art was forged not essentially by European Modernism but by a distinct Swedish optimism about the future in the years following World War II. Sweden emerged intact after the war; it retained its non-alignment policy, joined the United Nations, refused NATO, and for 30 years, under the leadership of Prime Minister Tage Erlander, enjoyed an economic prosperity and social affluence exceptional in Europe. It was under these privileged circumstances, not least the largesse of the Swedish welfare state, that Bærtling spent his adult life, continuing to believe in what the rest of Europe had to leave behind. Does that qualify him as naive? Bærtling could not help but become a Utopian idealist, and an intriguing one, even if his art is occasionally less than fascinating. This exhibition, superbly organized by John Peter Nilsson, allows us to unpack a time capsule particularizing a life when unambiguous sanguinity had its reign, while leaving us to wonder if it wasn't for the last time.