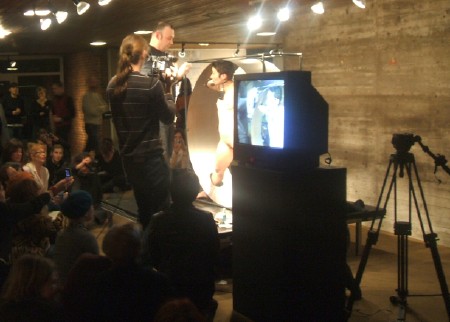 Staging an exhibition of performance art may seem like an oxymoron, but staging a show of feminist performance art from the 1960s and ’70s, before documentation was commonplace, presents further challenges. Kudos, then, to Berlin’s Akademie der Künste, for hosting the recent ‘re.act.feminism’ exhibition and conference.

Offering displays of video, photographs and a few remnants from key performances by pioneers such as VALIE EXPORT, Esther Ferrer and Sanja Iveković alongside younger practitioners such as Boryana Rossa, ‘re.act.feminism’ asked questions about the relevance of the work today, at a time when there is heightened interest, in the wake of successful survey shows such as ‘WACK!’, and an upsurge in the practice of re-enactment, with younger artists such as Cornelia Sollfrank and Lilibeth Cuenca following in Marina Abramović‘s footsteps by re-staging works by their forebears.

The audience was invited to make these comparisons by attending performances by artists from different generations, as well as delving into an archive of DVD and video of some 80 works covering the last 40 years. In contrast to the archive, which was heavy on first-wave American artists such as Martha Rosler, Faith Wilding and Carolee Schneemann, the exhibition had a very central and eastern European flavour, in keeping with its stated aim of incorporating these often-overlooked artists into the canon.

In the GDR, where state controls on expression were tight, there was no public audience for the work produced by women such as Cornelia Schleime and Gabriele Stötzer. Instead, they made photographs and Super 8 films to be shared amongst themselves. Stötzer, inspired by punk as well as art, founded the women’s art group Exterra XX in the ’80s and fell foul of the authorities for her support of protest singer Wolf Biermann.

Looking over her photographs of female nudes, Stötzer told me that the members of Exterra XX were not aware of the western feminist performance art going on at the time, and that she followed her own drives in making art. Imprisoned for being a ‘class enemy’, upon her release she sought to externalize the pain she felt, producing photographic multiples and staging performances with the female body at the centre.

This impulse to use the body as canvas is continued in Boryana Rossa’s performances. The exhibition and archive featured an earlier work by the Bulgarian artist in which she sewed her labia together. In contrast to some other performances at the conference, which aimed to re-stage feminist work, to re-position, re-consider or even update it for a contemporary audience, in her conference performance, The Vitruvian Body, Rossa sought to challenge an archetype: what she called the ‘anthropocentric and malecentric’ classical ideal of the body.

Wired up to a headset, Rossa addressed the audience in a matter-of-fact tone while undressing and positioning herself inside a metal, modern-day equivalent of the orb enclosing Leonardo da Vinci’s perfectly proportioned man. Speaking in Russian, she then directed her colleague Oleg Mavromatti in sewing her arms and legs to the apparatus. This spectacle was witnessed not only by an official videographer but by various audience members’ cameras, mobile phones and video cameras – all encouraged by the artist. Anyone venturing behind the contraption could see blood running down Rossa’s leg.

Once the artist intensified the performance to have her lips sewn shut, as a protest against censorship in the Czech Republic, many in the audience flinched, as Rossa was clearly in pain and blood ran down her chin. However, she had also invited a member of the audience to cut her free, and that allowed a certain amount of relief: we observed and were complicit in her pain but we could also participate in her liberation. Endearingly, several older artists, including Stötzer, approached Rossa afterward and hugged her, as if offering comfort as well as congratulations for her performance/ordeal. The political doesn’t get more personal.The ‘re.act.feminism’ archive is touring to Ljubljana’s City of Women in March and to the Kunsthaus Erfurt in April.