Sue Tompkins’s performances and exhibitions explore the shifts and ruptures of reverie, recollection and allusion 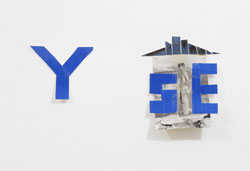 I visit Sue Tompkins’ recent untitled exhibition at the Modern Institute in Glasgow. The rainy-day sounds of a guitar loop from Richard and Linda Thompson’s song ‘Calvary Cross’ fill the corridor. In the gallery tiny words as strung out as insomniacs are dwarfed by the large sheets of butcher’s paper they are typed upon. This is a show you have to read, and as you read, it becomes apparent that faint strains of laughter lurk beneath the restrained surface. Anti-formal and elegant, tired creases split the paper like blurred horizons in old drawings, a drifting geometry interrupted by an occasional snort of colour. These are the smallest, loneliest poems imaginable.

A few bright, blunt paintings scrawled with enigmatic, isolated words (‘Stay Puft’, ‘Acorn date 2006’, ‘Gleam blue’) have been placed on top of some of the sheets of paper, which are draped around the gallery like washing hung out to dry. The rest of the show comprises an indigo cloth covered in small cloth leaves, a gold leaf, a Polaroid photograph of light glare caused by shooting an image on a computer of Kate Moss walking down a catwalk runway in 1992, a Clinique advert and a brown cardboard crucifix covered in Sellotape. Two pretty, pale, empty water bottles stand sentry to nothing, daft and solemn on a high shelf. The music from the corridor touches everything (the confluence and split of sound and object).

To try to make sense of such an accumulation of music, ephemera, paint and typing is to miss the point – Tompkins is not a sensible artist. She focuses on the shifts and ruptures of reverie, recollection and allusion, the traces of people, ideas and words that affect and shape daily life. She sees exhausted things in fresh ways and new contexts, but without ideology, dogma or single-mindedness, mining the innate instability of communication – be it verbal or visual – with affection, absurdity and common sense. (In this, Tompkins’ work recalls the fragmented, distilled thinking that jolts you awake at 4 am, a restlessness perfectly embodied in the last lines of Elizabeth Hardwick’s autobiographical novel Sleepless Nights from 1979: ‘I am always waking up to address myself to B. and D. and C. – those whom I dare not ring until morning and yet must talk to throughout the night.’1)

At the private view of her show, accompanied by Alan Michael on guitar, Tompkins sang three melancholy, hopeful songs about tired people glimpsing light in the gloom: Richard and Linda Thompson’s ‘I Want to See The Bright Lights Tonight’ (‘I’m so tired of working every day’), Bruce Springsteen’s ‘Dancing in the Dark’ (‘You sit around getting older, there’s a joke here somewhere and it’s on me’) and David Bowie’s ‘Be My Wife’ (‘Sometimes you get so lonely, sometimes you get nowhere’). Singing someone else’s songs – especially if you’re a woman in an art gallery, the songs are famous and it’s your opening – is a deceptively simple thing to do. Tompkins makes it clear that in her case appropriation can be as affectionate as it is insubordinate, and displacement (of gender, of venue, of lyrics) a great reinvigorator of the source material. If associations crash in uninvited, she makes them welcome. The arrival of pleasure is often messy.

Tompkins used to be in a band, Life Without Buildings, which put out a great album, Any Other City (2001), and then split up. Like a love-child of John Cage and Robert Wyatt, Tompkins wrote the words and sang them in an acrobatic voice that could flip in the blink of an eye from stuttering, high-pitched and dissonant to fluid and tender. (‘Eyes like lotus leaves no not even like! I’m mostly English! Difficult people slip away.’2). She treated silence like notes, broke up words, rearranged, repeated and remade them, tossed bits away and then built new phrases and insights from the detritus. She sang in the way most people think: in layers and leaps with inexplicable reason and soft forays, without apology or permission. Now she makes art in the way she used to sing. And she still sings.

‘I never deliberately search out a word or phrase or musical reference or any reference really. I think of something and refine it in my mind there and then, and make a note of it. For instance, I have just done some writing, writing the word ‘Lamlash’. So I might write down ‘Lamlash’ 25 times then I’ll probably leave it for a while. But probably not change it at all. But I’ll keep on adding notes and writing more until there seems to be a natural stopping point.’3

She is best known for her – for want of a better description – spoken word performances: Country Grammar (2003), More Cola Wars (2004) and Elephants Galore (2005), which I saw her perform at the Venice Biennale last year, at the opening of the Scottish Pavilion. In red high heels, constantly smiling, she moved back and forward, as hypnotic as a pendulum, reading, in a clear, high voice, from 300 pages of paper balanced on an upturned log. Some pages had one word on them, while others had many. The first phrase she uttered was ‘The air in here’. The last was ‘How to experience intimate places’. In between she either shot out a single word (‘Tuesday’, ‘air’) or repeated phrases (‘by memory alone’, ‘my favourite sky is many’; ‘I want to phone your brother up’; ‘I’m shy of the ashram’; and ‘Snow collector! I’m over here!’).

I write to her and ask her who she is looking at, listening to, reading. She replies: ‘artists I like to think about are … oh there’s so many it will look like a who’s who who’s dead who’s alive type list but at the moment jenny i like marc camille chaimowicz i love his work and his books particularly too cafe du reve i have just bought on amazon and I think it’s beautiful. cathy wilkes hayley tompkins karla black … all in glasgow! georg herold alex birchen vincent tavenne … he’s a giti nourbaksch gallery artist i saw some of his work for the first time last year and i really liked it ...

lots of writers... i like ted hughes a lot i didn’t used to but I’m into it now! i love his poetry and writing for children too.

the hawk in the rain

i love oh god the lists could be long but i like robert wyatt very much. i like everything he does and who he is and how he looks the lot! dancey feel good dance stuff a lot country people like loretta lynn and dolly parton. i like their attitudes and I’m the sort of listener that just puts on the same song all the time. like everyone i think! that could be anything. like very bad stuff too

it’s funny when you see who you like isn’t it!’4 (She was born in Leighton Buzzard in Bedfordshire, a poem of a place if ever I heard one.)

Language – the words and images we use to communicate something – is as valuable and expendable as ice. Words are ready-mades, and, like so many ready-mades, easy to dismiss. Tompkins treats them like precious rungs in a cheap ladder. (Before I saw her perform, I had never heard anyone say ‘weed holders’ with tenderness.) She employs repetition as a method of renewal, a way of scrutinizing the still rich potential of words and objects worn thin with use; in this she makes a delicate bid for semantic and aesthetic freedom. (She reminds me of Eva Hesse saying, ‘if something is meaningful, maybe it’s more meaningful said ten times […] if something is absurd, it’s much more absurd if it’s repeated.’5) She knows that words are never alone, never neutral and always nuanced, and she mines this information for all it’s worth. In love with non sequiturs, she takes the most incongruous combinations – ‘the colour of teak, the taste of steak’ – dignifies them with dislocation and then shines a bright light on the inventive possibilities they might toss up. Her curiosity is both solipsistic and generous; she understands all too well how odd thinking can be and assumes her audience finds the world as rich and strange as she does. She is a rigorous – even obsessive – editor, but it’s an editing driven by a logic only she is privy to. I can imagine her saying, in the most apologetic of voices, that although she would like you to understand, she would prefer it if you didn’t make her explain.