Cloudburst and Under the Water (Durtro Jnana, 2007) 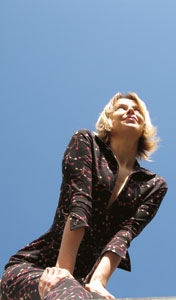 Music of such simple beauty as that made by Andria Degens’ project Pantaleimon needs a suitably perspicuous definition. It might best be described as ‘spooky-folk’. Degens’ début album was 1999’s Trees Hold Time. This was followed four years later by an EP entitled Change My World, produced by Steven Stapleton (aka Nurse With Wound). Whereas that EP’s title track was similar in tone to the folk-tinged, Indian raga style of Stephen O’Malley’s recent Ginnungagap project, Cloudburst is a more melodic affair and ranks alongside John Fahey’s ‘Blind Joe Death’ sagas (1959–87) or Jim O’Rourke’s Bad Timing (1997) in its finger-picked candour. The seven-inch ‘Under the Water’ is even more succinct, reminiscent of folk singer Vashti Bunyan but with more of the lamentation of Bunyan’s contemporary Bonnie Dobson. Degens has also contributed to recordings by The Dirty Three, created music for Susan Stenger’s ‘Soundtrack for an Exhibition’ at the Musée Art Contemporain, Lyon, in 2006 and appeared on Current 93’s 2006 magnum opus, ‘Black Ships Ate the Sky’.

Degens met British experimental music icon Current 93 (musician David Tibet) in 1996 through Nick Cave, and then through Tibet she met Steven Stapleton. She had never heard of Current 93 or Nurse With Wound but had always been drawn to more experimental music such as Can, Popol Vuh and Neu!, along with Indian ragas and Vedic chanting. Degens states that she has little knowledge of traditional British folk: ‘It’s just not in my background […] My music comes from a tradition which is probably not of this world. I feel very much an outsider and not sure where exactly my music fits in: all I know is, I’m compelled to play.’

Degens sees exponents of ‘New Weird Americana’ – an experimental take on traditional US genres such as Bluegrass or Cajun – like Ben Chasny (Six Organs of Admittance), Fursaxa and Tom Carter of Charalambides, as closer relatives sonically than the darker, eschatologically themed music of Current 93. It’s perhaps a decisive move on her part given that the 1980s’ ‘neo-folk’ movement with which Current 93 were once linked is now unfortunately mired in extremist politics. Yet Pantaleimon’s music sounds as though it shares more of that movement’s early attempts at creating a new kind of experimental European folk than the Cajun-inspired psychedelia of ‘New Weird Americana’ bands.

However, both US and European takes on their traditional music are getting hip. Wild Tigers I Have Known, the 2006 début film by 23-year-old New York director Cam Archer, was produced by Gus Van Sant and officially selected for the 2006 Sundance Film Festival, and, like Harmony Korine’s films, it paints a picture of disaffected American teenage life. Songs by Pantaleimon, Current 93 and Six Organs of Admittance feature on the soundtrack. This could mean that Degens may soon find herself in the odd position of suddenly having an audience so young that they think that a sitar is someone who looks after them when their parents go out for the evening.