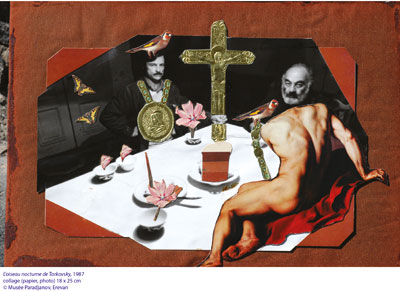 If only by virtue of the rarity of the occasion, this exhibition of Armenian filmmaker Sergei Paradjanov’s collages and assemblages from 1970–90 was not to be missed. Internationally acclaimed for his experimental, hermetically symbolic and colour-saturated films Tini zabutyka predkiv (Shadows of forgotten ancestors, 1964) and Sayat Nova (The Colour of Pomegranates, 1969), Paradjanov challenged the prevailing Soviet socialist realist aesthetic of that time and celebrated Armenian folk traditions in these early works. According to the exhibition catalogue, when first released, the ‘decadent aestheticism’ of Tini zabutyka predkiv got Paradjanov blacklisted and Sayat Nova was censored. In 1974, he was arrested and sentenced to five years in a hard-labour camp for ‘homosexual behaviour and trafficking art objects’ and other trumped-up charges. Released in 1979, he was allowed to return to filmmaking in 1984, and completed four further films before his death in 1990.

Lent by the Paradjanov Museum in Yerevan, most of the collages and assemblages here were made during Paradjanov’s period of incarceration and his subsequent privation from filmmaking, and thus bear material witness to life in and after the gulag. The thematic display (Self-portraits, Icons, Episodes in the Life of the Mona-Lisa, Works Made During Incarceration, Masterpieces from the 1980s, Films and Hats) coalesces his extraordinary creative energy and downplays any tragic undercurrents one might glean from the individual pieces. Each formal grouping emphasizes that Paradjanov considered these objects not only as complements to his films, but also as artworks in their own right. Quotes by the director printed on the colourfully painted, free-standing walls that divided the space reinforce this interpretation: ‘a collage is a compressed film’ or, to his friend Andrei Tarkovsky, ‘what you are lacking is a year in prison; your talent would deepen and grow more powerful’.

Despite these unifying devices, however, the exhibition reeked of the ambivalence that imbues all substitute objects. Hand-crafted and manufactured dolls figure prominently as stand-ins: a nude baby topped with a crepe-paper cocktail umbrella represents Genghis Khan’s Childhood (1983), a sharply-dressed lady made of thread and burlap is his steadfast advocate (and Soviet poet Vladimir Mayakovsky’s muse) Lily Brik (1974), while Paradjanov appears in self-portraits sporting a curved wire-brush beard and spectacles. Self-Portrait with Cage (1983) is a life-size assemblage made from what appears to be an upright wooden coat rack, dressed in a sumptuous traditional costume, its velvet head bearing a wire egg basket and a jewel-hued stuffed bird, while Angel and Paradjanov in Heaven (both 1988) are empty shells fabricated out of dolls’ outfits, torn bits of garland, clothespins and fabric flowers, which hang like marionettes just waiting to be brought to life.

Dozens of unrealized films bubbling in the director’s imagination seem to lurk behind the glued fabric and photographs of the storyboard collages (Sketches for the Film Confession, 1988), overstuffed dioramas, and frames filled with shards of broken porcelain, sewing notions, watch mechanisms and other bits and bobbles (My Grandmother’s Nut Preserves, 1984). A collage/drawing Paradjanov made while imprisoned, Mourning for a Filmmaker (1974–7), shows a priest dressed in a floral robe of cut and glued paper, flanked by two mourners who stand over a transparent coffin containing a filmmaker’s corpse. A longing for cinematic dialogue is evidenced in his darkly humorous Tarkovsky’s Night Bird (1987), a reworked black and white photograph of the two cinema greats dining together. In this photomontage, Paradjanov replaced his own rotund figure with the muscular nude body of some secular god, and decorated Tarkovsky with a large sacred pendant and a gold crucifix in his hand. Two birds, harbingers of fate, are perched on the directors, who look directly at the camera. Corporeal strength confronts spiritual force in a meeting of two minds who arguably considered film their religion.

Paradjanov’s collages and assemblages surely speak volumes about the director’s aesthetic predilections and thematic obsessions, but they also repeatedly recall his lost object of cinema. In the end, this could only lead to viewer frustration, which was amplified when watching the three short films that were included in the show: Hakop Hovnatanian (1965) and Arabeskebi Pirosmanis temaze (Arabesques on the Pirosmani Theme, 1986), which treat historic painters from Armenia and Georgia respectively, and the documentary Paradjanov. Verjin kolahz (Paradjanov. The Last Collage, 1993). Disappointingly, although the films were projected in individual white-walled spaces, the screens were completely washed out by the light pouring in through the gallery windows and the soundtracks contaminated each other. In comparison to the decorative, multi-layered way in which the works are displayed in the Yerevan house museum (evidenced in several photographs in the show), their utterly conventional presentation here could never do justice to or recreate the magnificence of Paradjanov’s cinema, but the conditions in which the films were presented was simply scandalous.