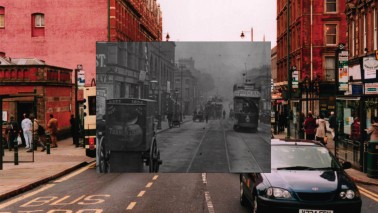 As a film-based project, Patrick Keiller’s interactive installation The City of the Future (2007) was minimal in spatial terms, with its content displayed on five closely hung screens. This proximity jarred with what the press release suggested was an opportunity to wander through the exhibition as though in parallel to the real-world locations of the films being shown. Instead, the positive effect of the layout was to intensify the immersion into a black and white record of the past, with the viewer’s eyes moving back and forth across screens whose image could be seen from both front and back. The installation’s success was aided by Keiller’s decision to allow the viewer to manage the content, selecting films from a series of interconnecting maps using consoles on the gallery floor. The real depth of The City of the Future could then be unearthed in exploring 68 short films that span the turn of the 20th century, between 1896 and 1909.

The majority of the films originated from England, with more meagre coverage of the wider British Isles and the rest of the world. Despite the focus of the project’s title on the ‘city’, the subject matter was varied, broadening out from street scenes to include rural railway lines, the open sea and an African battlefield. There was room here to criticize, or at least question, Keiller over issues of the selection of imagery and subject matter, the perspective given and the level of inherent bias in his particular portrayal of a faded world. However, such issues did not detract from the viewer’s appreciation of the wealth of archive footage he had pulled together or of his skill in tying each film to its specific geographical location.

It was the subtle moments that intrigued: a small boy walks across the camera on a Glasgow street with a paper and string parcel; a couple push an elegant lace-lined pram through Sheffield while a smartly attired, stern-faced conductor swings by on the rear of his double-decker tram. Such glimpses of lives pass by within a treasure trove of detail, from the horse-drawn buses through the advertisements for Nestlé and Bovril to the formalized, class-designating dress of the people. Everywhere, in these early days of film, the camera seems to excite, with crowds of smiling faces from a cross-section of society looking on as the filmmaker captures their world. Across Keiller’s selection grand themes were also gradually drawn out; in one film we see the men in bowler hats streaming over Westminster Bridge beneath Big Ben at the heart of the empire. ‘Event’ footage too occasionally appears. In one case an expertly framed film captures the launch of the battleship HMS Albion into the Thames.

Aesthetically, the films that Keiller has compiled were more notable for the way in which they came together to give a coherent picture of a specific time than for their individual beauty. However, there were exceptions. Perhaps most striking of all was an extended shot that trails over snow-covered fields on the edge of Halifax. The technically impressive film lingers over the town- and countryscape, smoking chimneys abutting the sky like an animated version of a painting by L.S. Lowry. The visual sister to this film was a similarly haunting panning shot across snow-strewn wreckage following a Canadian fire; black trees and gnarled house frames against clean white, appearing as though both a kind of early news footage and the landscape from Pieter Bruegel’s Hunters in the Snow (1565).

Keiller’s overarching approach to The City of the Future rested on the idea that the man-made environments in these early films are remarkably similar to those of our own time. He argues that the content of archival film records may reveal to us the building blocks of the present as well as the future we continue to pursue. On one level his contention faces a troublesome counterpoint in the other-worldliness of much of this foregone era, with its domination by the hat, the rigidity of dress and the prevalence of animal life in the street. Overall, however, Keiller’s point is well observed, and one that prompts a journey down numerous avenues of thought.

Through collating an extensive cinematic record of an earlier time the filmmaker has found an interesting means of alerting us to the fact that, while the individual particulars may change, the big trends and power plays are rarely truly new. The most pressing ghosts of the present that emerge from these films are the dominance of trade and industry, mankind’s footprint and, most tellingly, an earlier wave of globalization. This world of 100 years past is one in which British-Indian soldiers march through Shanghai, troops board ship at Southampton only to re-emerge in South Africa, and the New York skyline already banks against the sky.

Arguably The City of the Future drifted in the troubled territory between interactive museum exhibition and creative experiment: asking, once again, the old question of ‘is this document or art?’ More interesting areas of inquiry, though, lie in asking how far Keiller will expand his project. Is there a kind of integrity and fulfilment in its current form? Could it ever truly achieve completion? What is certain is that there was already plenty of rewarding material here, and that Keiller has embarked on an intriguing venture.