[member:membership-name]
[member:full-name]
VIEW MY DASHBOARD
BY Matt Saunders in Reviews | 05 MAY 07 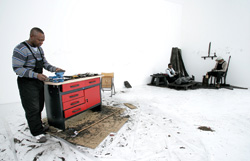 Like it or not, materials have their associations, and a certain costly hardwood may be forever haunted by Paul McCartney and Stevie Wonder’s 1982 duet, ‘Ebony and Ivory’. Imagine my misgivings, then, on entering Pawel Althamer’s exhibition, ‘Black Market’, to find a tableau of Africana, hand-carved in ebony. The scene was set off by a specially installed white PVC floor, while in the adjacent corner, three men of African descent milled around a workbench, strewn with jet-black shavings and sawdust. Nothing burns like the subject of race in America. What about in a white cube in a courtyard in Berlin?

Althamer’s sculptural mise en scene is race rendered art-historical: the Western artist’s studio, flooded with the influence of the ‘Dark Continent’. A black shipping palette bore a prone, carved figure, larger than life-size, with cowry shells inset for eyes. Around it lay the stuff of the studio – numerous tools, a chair, coffee cup and mobile phone (all exactingly carved, like a gothic cover-version of a Fischli/Weiss installation) – while shelves displayed the Africana: figurines, animals and mask-like faces (also a hand-grenade, a machete and a model airplane). On the wall, mixed in with doodles made with stubs of ebony by visitors to the exhibition, a sketch by the artist portrayed the whole scene as a still life in an art academy.

What felt academic, in fact, were the workers. Althamer is well known for incorporating immigrant labourers, community members or children into his projects, as are a number of artists these days. Is it possible that the deployment of existing communities, of economies of labour, has become a style? If so, Althamer deserves credit as a founding member of this approach, and is generally among its most nuanced practitioners. In fact, once you get past the hot-button title and the generic au courant academicism, the threads of the initial assumptions you might have about ‘Black Market’ productively unravel. The ‘workers’, for instance, weren’t exactly that. Neither handworkers nor local immigrants, they were African-Poles whom Althamer met in Warsaw, more accustomed to work as translators and theatre actors than as craftsmen. After carving many of the objects himself, the artist left his apprentice-collaborators to fill in, pulling pieces of raw ebony from a bin and working them with increasing confidence. In this allegory of influence, Althamer deftly flipped the arrow of expertise and instruction. Compare the finely crafted coffee cup, rounded with sensitive precision to the rough-hewn, tentative carving of a pipe. Such distinctions open meditation not just on the defunct terms ‘primitive’ and ‘cultivated’, but on that old bugbear ‘skill’.

Halfway through the exhibition, his collaborators too packed up, leaving only the artist’s slumbering stand-in – for the wooden figure is indeed a self-portrait. In past works, Althamer has proven to be a master of the surrogate self. Here he was again, looking like something between a Cycladic figure and the Cardiff Giant. While some features were elongated and stylized – it’s tempting to say Africanized – others, like the nose, appeared specific and personal. Meanwhile, the ebony was exquisite, magnetic, loaded with symbolic meaning in the way Joseph Beuys’ materials can be. Surreptitiously, I picked some up. The wood was smooth, dense, much heavier than expected. Then I realized that this show was actually full of stowaways: pieces of smoked oak and stained pine hid among the ebony. Some parts were polished, some rubbed with oil so they looked painted. The simple black-on-black unfolded into an array of idiosyncratic, artisanal decisions. Made by whom?

‘Black Market’ confounds a simple agenda. What is the artist’s relation to Africa? The press release cites a deeply formative trip he took there in 1991. Ultimately, this exhibition may be about (self-)portraiture, but it’s a portrait lodged in society, surrounded by signifiers of acquired skills, influences and aspirations. How can Althamer, or indeed any artist, represent his loves, well aware of their place in history and the troubled currents of society? Africa is merely thematized, but Althamer stages his own engagement as a social activity, a genteel wrestling match with the most loaded of materials.

Stepping back, it was almost difficult to see the sculptures, so gleaming white was the ground, so bluntly high-contrast was the set-up. Yet this strobing between rich detail and glaring divisions drove the exhibition. The same goes for its social set-ups: ‘Ebony and Ivory’, ‘Black Market’. It’s not that the exhibition undermined or critiqued these loaded terms. But it did strive to move social discourse into material discourse, which is neither neutral nor without mystery. It located an idea of the individual whose boundaries shift between engagement, influence, history, community and constant learning.