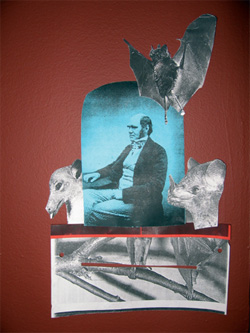 For curator Rita Ackermann the stress here is on ‘perfect’, not ‘man’ or even ‘show’. Inspired by a housewife’s wish-list poem she spotted in a truckers’ magazine, the exhibition extends and gives new permutations to the idea of male absence (or residue) prevalent in much of Ackermann’s own work. She culled work from 17 artists, principally women, of laudably varied styles, nationalities and, perhaps most daringly, generations. Red, not pink, dominated. However, if the project of this overcrowded show was in-heat femaleness, a great deal of the noisy outrage was blunted by cliché. Tried-and-trite versions of male-mandated sexual prowess abounded: long hair, lad-mag sex poses (anal access a favourite), generally on heels platformed or stilettoed. The result, for the most part, was a raucous blur of smoke, mirrors and not much fire. Ackermann, like her bad-boy cohort Richard Kern (fragmentally present on the show’s invitation, his photograph obscured by the instigating ‘perfect man’ poem), has a weakness for the platitudinous extremes and sure-fire shock that pornography so dependably provides. Mired in a one-note interpretation of gendered power, the show stayed within the familiar confines of battle of the sexes territory.

Despite the generally cacophonic effect of the whole, Ackermann succeeded best in the unexpectedly subtler choices, such as Spartacus Chetwynd’s refreshingly witty book-ends of Darwin and Bats (undated) and Steve Irwin (2005) – cut-outs of clip-art that traced mankind’s efforts to transform nature from elemental force to commodity (even ‘Harriet’, the recently deceased Galapagos tortoise seminal to Charles Darwin’s work, spent her last years as part of Irwin’s Australia Zoo). Although Mirka Lugosi’s eroticized works on paper break no new ground, her untitled 2006 graph paper drawing was a delicate amalgam of fetishized body parts (budding breasts, baby-doll vulva, blow-up doll mouth) brought together in a child–woman, her hands pressed against the grid as if on a chain-link fence.

Exploring the idea of auto-perfection, Breyer P-Orridge’s collage The Perfecting Man (2007) juxtaposed a post-cosmetic surgery self-portrait with a crouching figure in a Charles Manson T-shirt, the gold-leaf background like the molten remnant of a gilded cage. In Carol Rama’s Tongues 18 (1996) magic-markered slim red slabs, superimposed on a found technical drawing, sprouted black Egyptian eyes. A contemporary and friend of Man Ray, Rama offered a grace note; a glimpse of something beyond the mechanical erotics prevalent in the show.

Real rage and/or obsession fuelled the two best pieces. Ferociously squatting in one corner was Marianne Vitale’s That Brute Beasts Make Use of Reason (2007), a shambolic hidey-hole that was part geodesic dome, part tepee and part Japanese temple, the interior a mess of wood chips, pattern-ed wood panels and a motley red blanket. Within the wood, wire and plastic structure an off-kilter monitor screened a video in which the artist raved and ranted at several squirrels, her Plutarch-inspired patter full of ridiculous affirmations and keys to success (‘you can’t hit two targets with one arrow’, ‘make your accomplishments seem effortless’, ‘make them come to you’). Edited with élan and wit, the video worked because of Vitale’s go-for-broke delivery, done straight, giddily risking the excesses of true madness.

The late Judith Scott’s untitled sculpture from 2003 made a deceptively modest first impression. Anatomically heart-shaped, plugged with two useless knobs and bound in salvaged green and blue yarn, the piece sat like a silently ticking bomb. Closer inspection revealed two gaping holes in its side, suggestive of a skull. Coiled and unknowable, Scott’s piece had a pent-up energy as manic, in its taut, contained way, as Vitale’s. Both these artists tapped into complex and compelling forms of man-less power: the authority of nuance, the dangerous bravura of ambiguity.