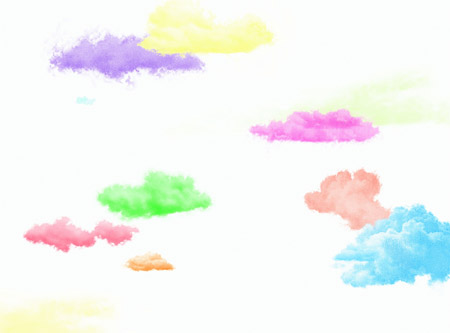 In the back room of Herald St was Untitled (Clouds) (all works 2011), eight studiedly synthetic photographs of cumuli, cirri, etc., tinted in rainbow colours, convened on white backgrounds and revealing themselves at close range as variably focused reproductions. Visually, they’re vacantly attractive and faintly estranged; as usual with Coffin, though, there’s an indispensable chunk of backstory. These particular clouds were bit-part players in early photography. Nineteenth-century collodion printing registered pale blue skies and clouds with equal density on the negative, engendering white blanks: these were stock clouds composited into photographs by Matthew Brady, Eadweard Muybridge, Roger Fenton and others, counterfeiting a holistic reality. What we’re privy to in Untitled (Clouds), then, is the physical world we seek to understand (or the heavens we gaze dreamily into) held at a double remove. Asked to recognize how photography doesn’t mirror but construct, we’re also placed at a point before that construction has even fully occurred. The mind, frustrated by half-finished images, might drift into mentally completing the landscapes, just as one tends to infill the canonical sculptures (e.g. Constantin Brancusi’s Endless Column) that Coffin, in a 2007 series of freestanding black silhouettes, pictured in outline; then, so the artist would hope, we notice ourselves doing that.

The show’s main draw, in the darkened main gallery, also visualized the intangible. Untitled (Lines) is a model of how light works and a tribute to the model we have of it: seven spindly, floor-to-ceiling lengths of neon in the colours of the Newtonian spectrum, which the scientist discovered in 1672 by refracting light through a prism – red, orange, yellow, green, blue, violet. (And, in Coffin’s case, pink, though technically it’s an interloper.) These skinny verticals bounce coloured light complexly onto each other and thence, in various combinations, onto the gallery walls. The movement of spectators, meanwhile, projects rainbow-toned shadows unpredictably around the space. Coffin’s partial artistic heritage in Light & Space reverbs here, since this is a piece about visual perception; again, though, it’s also a piece about the perception of perception. At Herald St, one could experience it as an Olafur Eliasson-style installation activated by motile bodies, but it felt most salient without other people in the room, as the piece went semi-inert and you wandered around trying to tabulate how, say, green plus orange makes pink.

I’m not sure I understand light any better for orbiting Coffin’s glowing gassy lines, and in some ways his art plays discomfortingly on art audiences’ lack of versing in science. Under his auspices, light – and clouds – feel pointedly out of reach, shimmering abstractly behind representations and theories. In the past, Coffin has foregrounded New Age aesthetics and dabbled in ufology, and his consciously bright, footnote-rich work can sometimes feel as if it plays superciliously with such references. But even though there was a warm fuzziness to this show’s aesthetic cast, it didn’t feel like a traducing of blue-sky thought – more a way of smartly bracketing a cosmic outlook. Coffin’s layered scrims between the viewer and the object of perception end up apostrophizing mysteries that refuse to be unravelled (for all that they’re embedded in our everyday experience) and, additionally, the sense we’ve made of our world. And what ought to seem airlessly knowing – the n+1 model of conceptualizing – more closely approximates a zigzagging conduit to a sense of wonder.