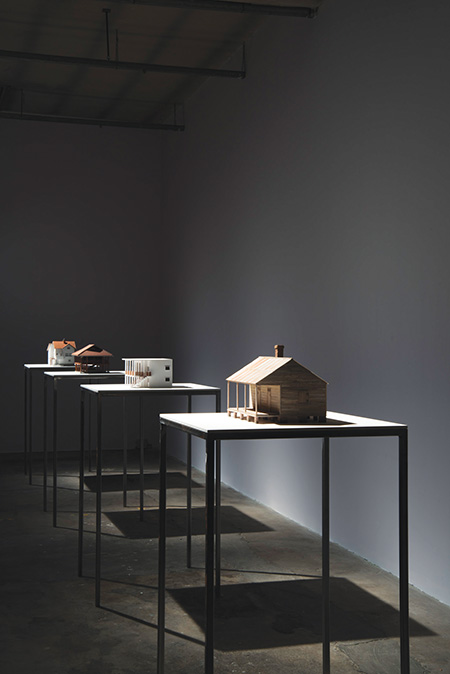 Despite being staged with great beauty and precision this exhibition of Peter Friedl’s work left an impression of ambiguity. This started with the show’s title, ‘Dénouement’, which in French has two meanings: the straightforward conclusion of a situation and, in theatrical parlance, the cathartic resolution of a dramatic problem. Four model houses set on plain, long-legged tables, and illuminated by spotlights in the otherwise darkened gallery space, served as an introduction to the show (‘Rehousing’, 2012–13). The series comprises reconstructions of the artist’s parental home, the private residence of Vietnamese communist leader Ho Chi Minh, a 19th-century slave cabin from the United States and Luigi Piccinato’s unrealized utopian-modernist ‘Villa Tropicale’ from the 1930s, when Italy was under fascist rule. The models are based on various sources: private documents in the case of the artist’s family home, the artist’s own travel photographs for Ho Chi Min’s house and the slave cabin, and a drawing published in 1936 by architecture magazine Domus for Piccinato’s design. Above all, however, it is the selection of houses that is significant: Friedl places the intimately private alongside the socio-politically precarious; the architecture of slavery alongside the architecture of power; the actually constructed alongside utopian design. In this way, ‘Rehousing’ runs the gamut of artistic model-making strategies, intelligently questioning the very feasibility of recounting history. Every model stands in a specific historical context, fragments of which become visible in the painstaking reconstructions, without the need for lengthy explanations beyond the few details in the press release and the works’ individual titles. The slave cabin (Greenhouse), for example, is immediately recognizable on account of its obstructed windows and the bars across the doors; Friedl’s parental home in Upper Austria (Gründbergstrasse 22)­­, on the other hand, can be identified by its almost fortress-like, yet faux-cosy, typically central European design. Rather than presenting history as a meaningful grand narrative, the artist dissolves the coherence of history into specific problem cases, with no solutions in sight.

The lightbox Schneeglöckchen (21. März 1941) (Snowdrops, [21 March 1941], 2013), which was installed in the gallery’s main space, shows an enlarged, colour-inverted photograph of a snowdrop flattened by a flower press. The flower came from a herbarium belonging to Friedl’s mother, who collected the specimen on the date in question – a few months before the German army launched its Russian campaign. Once again, history appears between the poles of micro- and macro-narrative. In the middle of the space, four traditionally crafted Italian marionettes hung from the ceiling: The Dramatist (Black Hamlet, Crazy Henry, Giulia, Toussaint) (2013). Serving as a counterpart to the uninhabited models in ‘Rehousing’, these 80-centimetre-tall puppets embody four historical figures: John Chavafambira, a healer and diviner of the Manyika tribe (from what is now Zimbabwe) who was the subject of a two-year study by the South African psychoanalyst Wulf Sachs, published as Black Hamlet (1937); Antonio Gramsci’s wife Julia Schucht, to whom the Italian Marxist addressed most of his famous prison letters; Toussaint Louverture, the leader of the Haitian Revolution executed by the French in 1803; and the legendary industrialist Henry Ford. All four characters have previously featured in Friedl’s work: Gramsci, for example, was the subject of the artist’s solo show at Neuer Berliner Kunstverein in 1999, and Louverture was a central character in his essay ‘The Curse of the Iguana. On Genre and Power’ (2000). Also, obviously, these figures, like the model houses, represent specific moments in cultural and political history. At the same time, these puppets, as objects controlled by others, embody a rejection of the bourgeois genres of theatre in which the actors assume artistic autonomy.

In this show, Friedl’s reflections on politics and his critique of genre went hand in hand, revealing the sovereign subject – an ideological role that has regained popularity in neoliberal times – as an ambiguous, theatrical chimera. The final work in this highly focused exhibition, a ‘death mask’ (Untitled, 2013), presented another such chimera. The cast is of the artist’s face but, since the artist is still alive, the plaster object fakes his death – just as the death of the hero in the theatre, bringing about the cathartic denouement, is of course faked.