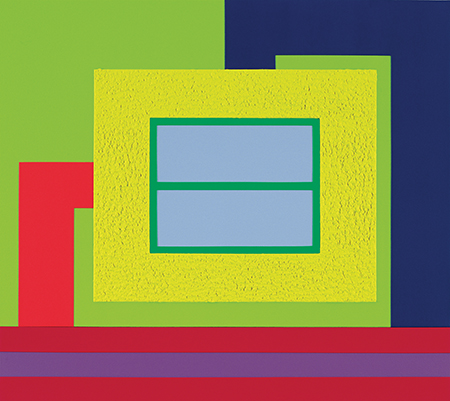 It requires a stretch of the imagination to reconstruct the aura of pretention that surrounded Peter Halley’s paintings when they were first exhibited in London at the end of the 1980s. This was a time when formalist abstract painting had come to be considered self-indulgent decoration. Only less esteemed might have been the notion of a painting illustrating a concept. With what seemed like strategic effrontery, Halley conflated these positions, and backed them up with essays replete with references to hip French post-structuralist theory, such as that of Jean Baudrillard, who claimed that ‘real’ events had ceded to their simulation. The recourse to a theoretical ballast for abstraction seemed derisory to a British empirical culture that likes the real to stay real; from a US perspective, it might have seemed an ironic slander on Greenbergian formalism for Halley to have rendered it as a constellation of signifiers, a code to crack. He functionalized a language that had prided itself on its aloofness from function.

A quarter of a century later, it is remarkable how the context has come around to confirming Halley’s intuitions. Following a decade in which formalist painting has been revitalized and revalued, it seems that if a painting does not have pretentions to devolve into a conceptual narrative it is considered arty-crafty and parochial. Relating themes of isolation (the cell) and networking (the conduit), Halley foresaw the atomized communication of the digital era. His social networks have become ‘social networks’. Indeed, compared to the attempts of younger painters to wrest the indirectness of painterly signification into narrative, Halley’s transformation of form into sign preserves, and even nurtures, the formal autonomy of his paintings. In this more formalist-friendly time, the minimalistic aspects of his idiom are more visible: the stubbly materialism of the colour fields; his process- and recipe-based procedures; the fat stretchers stressing objecthood over image. In comparison, many recent metaphors for a networked, commodified society, constructed by a younger generation of painters, look like neatly legible illustrations of an MFA thesis. Ironically, the current tendency, nurtured in MFA programmes, for artists to require a theoretical structure to ballast their visuals, stems from the early Concep­tualism of the late 1960s and early ’70s via theory-based practices, such as Halley’s, which emerged in the 1980s.

Leslie Waddington’s gallery on Cork Street is one of the few commercial spaces in London that has been around since that period (it was founded in the 1960s). Although Halley’s 13 new paintings (all 2013) – all relatively small for him, at less than a metre and a half in height – have a look of gem-like commodities which is en­hanced by this British establishment context, they are resistant to being sidelined into tokens of an established idiom. Their heightened DayGlo contrasts seem tuned to assimilate the irony of ending up representing what you were. The compositions are familiar: a rectangle of lumpen Roll-A-Tex paint, containing one or two smaller rectangles, occupies most of a background of flat colour. The inset rectangles are usually divided by bars of the width of standard masking tape. A separate narrow canvas, usually traversed by a single stripe that emphasizes its horizontality, abuts the main canvas from below – both a symbolic ‘ground’ and a breaking of the hermetic surface and its circuits. The conduits are often the only elements disrupting an otherwise perfectly symmetrical composition. A single line, dividing a rectangle into two, suggests a window; more than one, and they become the bars of a cell. But those readings mesh: modern architecture is envisaged as a prison, and vice-versa.

And yet, it is now Halley’s dodging of these metaphors that is most notable. The textured paint – which he means to be reminiscent of the stucco effect of motel ceilings – is thicker than it was before, the conduits raised with embossed definition. Such details emphasize an artisanal quality, and make a painting’s investment in the narratives on which Halley’s reputation is founded seem more suffused with irony. Those narratives, after all, must now be ‘prisons’ themselves, to the extent that they so ineluctably define him. Whereas, for example, the candy colours of a Sarah Morris painting enhance and decorate its architectural/capitalist conceits, Halley’s colour is critical of his conceptual structure, and resists being fully sublimated to the role of its mediator. It is overegged until it ceases to be a means of functionalizing his metaphors by making them more dynamically appealing, and becomes an index of an autonomous aesthetic language, with links back to the influence of Matisse on Halley’s earliest works from the first half of the 1980s. Those supporting canvases, taken separately, might resemble skinny Kenneth Noland stripe paintings, and you can’t get more shamelessly formalistic that – in the term’s unconceptualized, pre-Halley sense. Bang goes the theory, as the title of one of the paintings puts it.