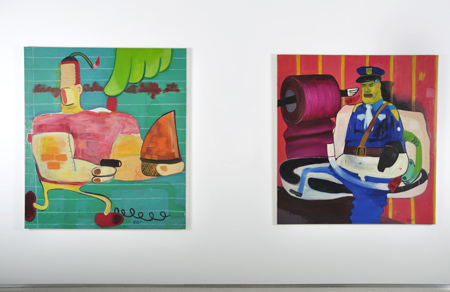 Clement Greenberg once referred to Joan Miró as the ‘Catalan Disney’. Next to the technicolor teratologies of a Peter Saul canvas or two, however, Miró’s metamorphoses of form look downright sober. Even the lowbrow pop of Disney was too sweet for Saul, whose paintings borrow from cartoons a transmutative energy as sinister as it is playful. This is the artist, after all, who put Donald Duck on the cross (Donald Duck Crucifixion, 1964). But there were no Mirós – or any other artists’ work but Saul’s – in this large solo exhibition, ‘50 Years of Painting’. Unlike the museum collections in which his paintings habitually get a look-in, there were no Minimalist sculptures here with which to cleanse the proverbial palette, just Saul’s characteristic pyrotechnics – gripping and silly, mordant and demented, in equal measure.

Greenberg himself did make a cameo, however. A pencil and gouache drawing – more tortured than even Donald Duck in his turn – subjects him to various corporeal perversions in effigy (Clemunteena Gweenburg, 1971). A castrated ‘Greenburg’ clutches a paintbrush for a phallus, wielding it from feminine genitals labelled ‘Hy-brow art’. But perhaps Saul’s greatest revenge upon Greenbergian dogma is simply the corpus of painting that – since the early 1960s – refused to settle into any particular camp, abjuring abstraction for aspects of Pop, Surrealism and an unabashed penchant for Baroque and history painting. Still, even some of Saul’s ‘Icebox’ series from the 1960s – represented here in several classic examples – echo something of Abstract Expressionism’s post-Cubist picture plane, as well as its more gestural energy. In Bathroom Sex Murder (1961) Saul appears content to elide and efface signs in a kind of palimpsest, rather than have them congeal into the loopy, goofy imagery that became his trademark.

The subject of this last painting is no aberration in his oeuvre. The abiding violence of Saul’s imagery – from Woman Being Executed (1964), through the prominent Vietnam paintings, to his recent pastiche of Max Beckman’s The Night (2009) – concerns almost exclusively female bodies. Already in his sketchbooks and doodles from the early 1960s – helpfully displayed here in evidence of his earliest comic-book affinities – Saul drew a man in a trenchcoat riddling a woman’s body with bullets. His imagery is unsettling in its potentially misogynist resonances. But were the O.J. Simpson case (the subject of a recent painting) and the Vietnam War (the subject of several famous ones) without their own profoundly misogynist violence (though I cringe at placing them as apposites)? Saul’s violence seems sexualized, rather than eroticized. In that dimension lies his painting’s more political (rather than titillating) edge – one that he has aimed at various dimensions of American culture.

Saul’s largest, horizontal canvases plainly invoke history painting as their model, appealing, too, to the epic athletics of Baroque compositions. In works such as Typical Saigon (1968), the hot-pink, burnished surfaces belie the horror of their subject: bodies torn open by bullets, women bound and violated, blood spattered and limbs severed. Later works from the 1970s through to the ‘90s reveal the same formula of political violence and attendant, glazed stupefaction: hyperopthalmic eyes bulge out of heads in Custer’s Last Stand (1974) and Columbus Discovers America (1992–5) just as they do in his more prominent ‘Vietnam’ series. Saul bludgeons his viewer as much as Columbus does the unwitting natives. But even – or especially – when the images soar over the top, they betray the forethought with which Saul has tackled his images. His love of painting, of its own histories, is palpable, contagious.

The exhibition resembled something of a miniature retrospective in its scope and quality. It was plain, however, that Saul’s early work had been trotted out to sell the newer canvases. In itself this is hardly anomalous or untoward. But the ‘60s psychedelia that still superintends his imagery appears – in more recent works – somewhat quaint and dated. Refrigerator Breakdown (2010) engages with his ‘Icebox’ series from the 1960s – several of which were on view in the same room. This is not to say that Saul has nothing more to say; he remains a politically astute artist, sensitive to the hypocrisies of everything from Abu Ghraib to more insidious, quotidian offenses and foibles. But something of the bite seems missing. More recent paintings, including Vacation Anxiety and Frequent Flyer (both 2010), which mix acrylic along with oil, reveal a more stippled and feathery brushwork. The hallucinations of yesteryear appear now – in the age of CGI – almost naïve; at the same time, the more air-brushed appearance of the newer works makes one nostalgic for the worked-over surfaces of the early ‘Iceboxes’, or for the slow, laboured leaching of form in paintings such as Superman’s Punishment (1963).