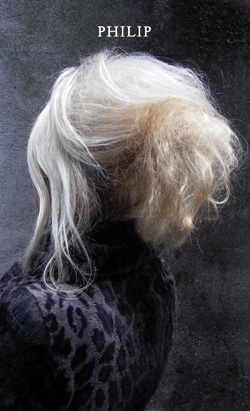 If half a dozen monkeys clacking away at typewriters are meant to be able
to reproduce the entire works of Shakespeare in a few eternities, how long would it take for a group of eight art critics, curators, graphic designers and artists to bang out a half-decent sci-fi novel? Philip was produced by this improbable team of art professionals (Mark Aerial Waller, Heman Chong, Cosmin Costinas, Rosemary Heather, Francis McKee, David Reinfurt, Steve Rushton and Leif Magne Tangen) in a biblically appropriate seven days, during an intensive writing workshop conceived by Chong and Tangen and curated by Mai Abu ElDahab, with the Project Art Centre in Dublin acting as host.

The novel is named, of course, after the visionary science fiction author Philip K. Dick (the setting is Philipville, ‘Final Days’, 2019), and if the quality of writing varies from occasionally eloquent to downright awful, recall that the master himself was a very uneven prose writer. Science fiction is, after all, a genre of ideas, and Philip has them aplenty. From ‘fruice’ (a kind of malleable, self-expiring protoplasm that is the substance of all consumer goods) and the machinations of the Kristol Corporation, to the Crystal Class (Philipville’s elite, descended from Straussian neo-cons) and the surreal malfunctionings of the ‘Domestic Help!’ robots (DHs), Philip reads like good old pulpy sci-fi entertainment. It is filled with over-the-top sex and carnivalesque violence. In one scene begging for cinematic adaptation an Hieronymus Bosch-like chaos engulfs the central department store: ‘In the culinary section DH robots were torturing each other and fucking wildly in a variety of impossible positions while constructing perfectly edible cakes. The toy section was a rampant war zone; miniature samurai warriors were disembowelling shocked teddy bears while cute lacy dolls were discovering Sapphic pleasures unplanned by their makers.’ Even the kitchen appliances get out of hand.

At the core of the novel are the twin themes of rapture and revolution, themselves symptomatic of today’s two major ideological axes: the rise of fundamentalist religion and the foreclosure of leftist politics in the wake of Communism. Part of the ambition of Philip is to write a history of the present, recounting the rapid world decline inaugurated by George W. Bush, a tale that is not without its amusing details (such as the Estonian ex-hippie Islam-convert who manages to unite the Arab world in a peaceful caliphate). The novel dwells on the purely negative moment of revolution, the orgy of violence become an end-in-itself apocalypse. Religious Schwärmerei takes the place of any kind of collective social consciousness, and (unsurprisingly) the established powers eventually regain control. Despite its implicit denunciation as an ideological opiate, there is also in Philip a redemptive dimension to religion, as if this nefarious tool of control was itself uncontrollable. This chimes in perfectly with a certain consensus, stretching across leftist philosophy (Alain Badiou, Slavoj Zizek, Giorgio Agamben, Antonio Negri – think of all their chatter about St Paul) to pop culture films such as The Matrix (1999), that real change today can best be thought within a religious framework.

The curator is to be commended for resisting the temptation to make the workshop into another exercise in relational/process aesthetics. One could easily imagine an exhibition filled with the writers’ scrawled notes, a poster of the overarching plotline, statements about the creative process and collective labour. Philip avoids this pseudo-documentary nonsense. The accompanying exhibition consisted mainly of a series of lectures by the participants, including a particularly inspired talk by Francis McKee on the history of psychedelia and machines, and a film programme of hard-to-find sci-fi shorts. The book is left to stand or fall on its own merits, and I hear that there’s a plan to send it, after this initial print run of 100 copies designed by Dexter Sinister, to a bona fide publisher.

To conclude with a modest prediction: the time for sci-fi in contemporary art has arrived. We will soon see more shows organized around this ‘minor’ genre, with Philip K. Dick figuring as an essential reference. In other words, look for more future in the near future.