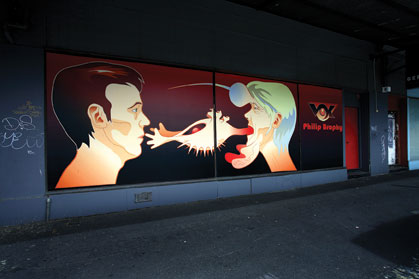 Philip Brophy’s twin-screen animation VOX (2007) was presented in a cavernous black space as a joint project of Gertrude Contemporary Art Spaces, Melbourne, and the Institute of Modern Art, Brisbane. The usually light, pine-floored room was inverted into a nightclub, minus glitterball and disco beats but with the same scent of heavy petting and spectacular performative encounter.

Brophy has worked since the mid-1970s as a musician, composer, sound designer, filmmaker, writer, graphic designer, curator and artist. He is also an acknowledged expert in Japanese popular culture, and so perhaps the Akihabara Electric Town district in Tokyo is the specific mise en scène of his work. In VOX the sweet, kawaii Pop sensibility of Japanese anime was pushed towards its darker incarnations, as found in Neon Genesis Evangelion (1994) by Yoshiyuki Sadamoto, or the 1970s’ Black Jack and Eulogy for Kirihito graphic novel creations of Osamu Tezuka. Indeed, Brophy curated the legendary Japanese manga artist’s work for the exhibition ‘Tezuka: The Marvel of Manga’ at the National Gallery of Victoria, Melbourne in 2006 – the first major show of Tezuka’s work in the West.

Brophy seems preternaturally able to articulate the nuance of digital animation and cinematic sound. VOX starts simply enough, with two vector-based portraits of a guy and a girl facing each other, vaguely reminiscent of Marina Abramovic and Ulay. As a cranking, Aphex Twin-like sound effect starts gradually to wind up, one of the figure’s faces begins to contort and morph until a slow flowering or spewing of gonad-like structures radiates forth from mouth, throat and forehead, nearly penetrating the face of the other figure. Climax over, the noise subsides back to the original starting-point, whereupon the other figure begins its own blossoming in reply.

Helpfully, to explain the incredible anatomies that emerge, Brophy described the example of the female protagonist’s utterance as: ‘She sings a mutated biosonic-vagina.’ I was reminded of the very graphic imagery of early Renaissance medicine, when the body consisted of four vital fluids or ‘humours’ and the uterus was thought to be shaped like the horned head of the devil, and evil spirits were thought to take over the bodies of witches and heretics, to be plucked from their mouths by holy men, the forerunners of Father Karras in The Exorcist (1971). Clearly the body for Brophy is a troubled place; as he explained in his paper ‘The Body Internal’ (1996), given at the Centre for Contemporary Photography in Melbourne: ‘The colonic figure and its moebius spawn populate our everyday culture.’ Drawing on the same horrors of the abject, usurped body represented by the possessing demons of the 15th-century Church, as well as the famous demise of John Hurt’s character, Kane, in Alien (1979), VOX was perhaps the summation of this proposition, turning the forms and function of social discourse into the currency of oro-genital exchange.

Brophy pulls no punches in his aesthetic and conceptual predilections, and some may find his work either too blunt or trite, but I was swayed by the exchange of the curious David Cronenberg-esque orchids and his play on the mechanics of desire and the limits of language. He is careful to point out the kaleidoscopic range of popular and art references in his work, and direct acknowledgement was made in his catalogue notes to West Side Story (1961), Sleepless in Seattle (1993) – he is scathing about the Rom Com genre of film, which he sees as ‘the essence of cinematic factiousness’ – and the porn movie Assploitations (2003), directed by and featuring Aurora Snow, as well as to the Iranian artist Shirin Neshat’s extraordinary work Turbulent (1998), in which notions of gender, the feminine and desire within Arabic cultures are explored. Yet, unlike Neshat’s, Brophy’s is a hyper-real exotic, dislocated from reality – or rather, as real as the fantasies of Japanese cosplay and otaku subcultures, which have received world-wide (and some would say over-) exposure since the 1990s in the work and writings of Takashi Murakami, most notably in his famous ‘Superflat’ manifesto (2001).

Through this mix-master approach Brophy managed to co-opt or perhaps corrupt an otaku sense of pathos (‘I am alone but not lonely’) into gender politics, suturing 1960s’ musicals with contemporary pornography. Somewhere between Hélène Cixous and the Marquis de Sade, Hans Bellmer and Batman, Brophy posits his visual narratives of contemporary love or, at least, what he describes as ‘the dimensional warp between the dick flick and the chick flick’. Who said romance was dead?