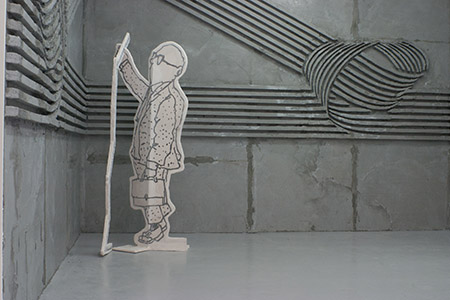 ‘Philip Guston: Late Paintings’ at Inverleith House was an antidote to the tranquilizing effect that larger institutions can have on remarkable works of art. Inside the 18th-century mansion, nine canvases looked like startled hobos who had stumbled into the lobby of a luxury hotel, hovering uneasily, waiting to be thrown out. Their weirdness and inappropriateness was emphasized by Inverleith House director Paul Nesbitt’s sparse but perfect hang. Ku Klux Klansmen are depicted rattling through cities (Riding Around, 1969) or painting under goofy light bulbs (The Studio, 1969), alongside various eaters, sleepers and smokers, all rendered with a cartoon line and in a palette stripped of easy comfort.

Guston famously absorbed the likes of R. Crumb and Krazy Kat, a dialogue between hard reality and the consolations of the hand-drawn line that found an echo in Mick Peter’s show across town at the Collective Gallery. The Glasgow-based artist coated the two main gallery walls in grey concrete, into which were modelled geometric Op art-like logos derived from Pirelli tyres (Tyre Knot Wall, all works 2012) and paperback cover designs dating from the late 1960s and early ’70s (Martin and Laurie’s Wall). Within these tomblike spaces stood three life-size cartoon figures, based on illustrations of the same era, that were rendered in jaunty squiggles and cast in resin (Reading, Measure and Measure Again and Porcine Lout).

The show’s title, ‘Lying and Liars’, referred to British experimental novelist B.S. Johnson’s belief that narrative fiction was a form of lying. In one space at the Collective, beside a vitrine of Johnson’s novels, was a restored version of his 1969 film Paradigm. In it, five decade-long phases of life (the 20s through to the 60s) are each attributed a tombstone-sized slab; together they form a stepped rostrum which an actor ascends, apparently embodying Johnson’s belief that the older you get the less you have to say and the more difficulty you have saying it. Peter remade this film set in the gallery, where the multi-coloured steps functioned as a plinth for the viewing monitor (Paradigm Staging).

Guston’s own response to ageing – possibly bubbling up from the same fear of silence that led Johnson to take his own life at the age of 40 – was a defiant act of painting. In David Blackwood’s 1982 documentary A Life Lived, shown in the basement of Inverleith House, the artist expresses regret at not having had the insight at 30 to be as productive as he had become in his 60s. He relates how he cast off the safe cloak of AbEx to challenge the progressive narrative of Modernist painting by articulating in a hot and personal way the tragicomic absurdities of his own world. Bored with abstraction and increasingly unsure of what one can claim to know, Guston’s lived experience appeared surer fuel for art which was itself a kind of recompense for the terrifying way life consumes us – be it by love, money, disease, Richard Nixon or Vietnam.

Peter’s mise-en-scène told the story of how forms etch themselves into the mind even after their own narrative is lost or obsolete. Appealing to us from an archival limbo, his exhibition asked for a new redemptive tale, of our choosing, to rehabilitate these mysterious forms. This purgatorial narrative was certainly amplified by the juxtaposition of Johnson’s formal experimentation, in that Paradigm arguably involves a longing for allegory – since, in allegory, life is a shape rather than a story. Modernity gropes around forsuch allegorical forms to inhabit that lie buried by a technological age devoid of mystery (no one understood this better than Johnson’s idol, James Joyce, who unearthed the mythical hero Ulysses, transforming him into Leopold Bloom).

For his part, Guston once claimed: ‘I have never been so close to what I have painted, not pictures but a substitute world that comes from the world.’ In Aegean II (1977), for instance, two armies of scrawny cartoon arms smash trashcan shields across an expanse of sea and, in a similar Joycean transposition, in Smoking I (1973) a one-eyed head in a bed is a confluence of the Cyclops and the cigar-wielding antihero Bloom. Guston’s pictures are embarrassing, since within them we recognize the weird tragicomic forms inside ourselves; Peter’s cooler investigations about conflicts of form and narrative felt more like a challenge thrown down to us from a scholarly perch.

Mark Sadler is an artist based in Glasgow, UK, and Berlin, Germany.