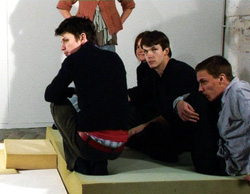 Ever since the 16th century, coffee houses have been seen as havens of free speech and thought, providing places in which all classes, trades and ages could loosen their caffeinated tongues without fear of retribution from authority. The drink’s reputation as a catalyst for political dissent grew to such an extent in the 17th century that in both Turkey and England it was temporarily banned. Even Starbucks, that corporate whipping-boy of the anti-globalization movement, traces its roots (and its corporate identity) to Seattle and San Francisco countercultures, which chose coffee shops over bars as their preferred meeting places during the 1960s.

Phillip Lai’s video Untitled (coffee display) (2007) confronted visitors at the entrance to his recent show ‘Free to Meet for Coffee Some-time Soon’. In the film, shifting muddy dunes of damp coffee grounds roll and crack on a sheet of blue and black plastic. Agitated by an unseen force beneath the surface, the drifts of brown grains advertise themselves abjectly to the visi-tor; devoid of taste, aroma or chemical effect, like much unprocessed food they make a pretty unappealing sight in two dimensions. Further through the gallery, however, a familiar and distinct scent did begin to catch on the air; following your nose, you could trace the peaty, treacly smell to used coffee grounds hanging in the sagging fabric of a blue, green and black ceiling suspended over the main gallery space.

A patchwork of tent fabric somewhat haphazardly stitched together, the canopy provided shade from the glare of the large halogen lights above. While this canvas ceiling immediately brought to mind the temporary Utopian structures of music festivals, it also resembled the makeshift shelters, so familiar from images in the global media, constructed out of desperate necessity by displaced or persecuted communities. The pervasive smell of used coffee drew a specific and uncomfortable line between these points of reference: leisure, often confused with freedom by those in Western liberal democracies, is offset by the strangleholds placed on developing countries by corporations buying crops such as coffee at rock-bottom prices. (As a result, many farmers have found that growing coca illegally is more profitable than growing coffee, thereby not only exacerbating existing problems within their own countries but also inadvertently exporting their own powerful form of stranglehold over sections of society in the West.)

If the main gallery represented a community forum of one sort or another, in the neighbouring space an arrangement of slim foam mattresses offered meagre sleeping arrangements. Moulded by the artist, none of the slabs of foam was longer than around four feet, although some made feeble gestures towards comfort with covers of thin patterned cotton. In the corridor between these two installations meaning was marshalled by Untitled (Flare – Interior) (2007), a video in which several young people are filmed in a white room containing the foam mattresses and are apparently directed in their actions from behind the camera. The film is silent, so the viewer can only guess at the instructions that prompt them to lift, hold, support and struggle against each other in what resembles (and, broadly speaking, is) a combination of experimental dance and a management training exercise. What is clear, however, is that wills are being negotiated, con-sensuses arrived at, and decisions resisted or tolerated. At one point two people release marine flares, a dramatic gesture usually reserved for last-ditch calls for help by the desperate. In introducing this nominally functional device, as with the coffee grains in the canopy or the fabric sheets on the mattresses, Lai opens the door on what might otherwise be safely allegorical abstractions, allowing a shard of all-too-harsh daylight to penetrate the normal behavioural codes of the gallery.

The work itself seems reluctant to relinquish its autonomy; in its blankness it hesitates to align itself too closely with any single language. As such, it exerts its own power over the viewer, unwilling to betray its own standpoint on the subjects to which it alludes. Throughout the exhibition, though, there is a sense of push-and-pull, of some things being offered and others withdrawn as a consequence. The tired materials of Lai’s installation seem constantly to be in the process of collapse or disintegration, with no faith in their own ability to stand up for themselves, yet the works stack up a series of binary forces like a spine: import/export, freedom/confinement, comfort/claustrophobia, resistance/consent. Lai is clearly interested in the mechanics of community and in the way it demands the compromising of individual autonomy in return for acceptance within it. As with the ropes that suspended the nylon canopy on pulleys, every action has an equal and opposite reaction, and a consensual, if imperfect, balance must be struck in order to
maintain the roof at a height that allows the structure, whether physical or social, to operate usefully. As for Lai himself, he stops well short of finger-wagging or condemnation, rather playing out his scepticism through the discussions that he initiates within his work. I suspect that, like most of us, he buys Starbucks coffee, but reluctantly, and with a creeping sense of unease.