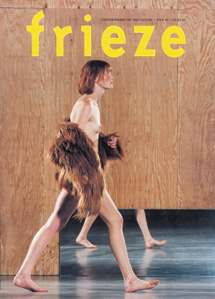 Just as decades ago we imagined that in the year 2000 we might all be eating space food and commuting in hovering cars, this exhibition, jointly conceived by Gonzalez-Foerster, Huygue and Parreno, projects us into a utopian future. According to a poster shaped like a giant Filofax diary page, the year is 2026. Works of art have become immaterial experiences, wall captions can read themselves out to you (whilst adding their own commentary) and individual artists no longer seem to exist. Presenting an unmistakably modern experience, the exhibition tries to outmode any show that might still venture to present material artefacts. But like sci-fi literature reflecting contemporary anxieties, a definite angst and nostalgia pervades the exhibition's slick, high-tech aesthetic.

Pierre Huygue's L'Auditorium (1998), is a Big Brotherly 'invisible' installation comprising a cinema-screen-shaped blue window and loudspeakers broadcasting sounds recorded in the exhibition. It exemplifies the generalised scrambling of noise and images that fills the space. Parreno and Huygue's pieces are at first indistinguishable from one another, ambiguously separated by thick-carpeted empty spaces - Gonzalez-Foerster's vapid 'environments'. The female speaker who presents each piece on video screens throughout the show (Le Narrateur (1998), a collaborative piece between the three artists), blurs authorship whilst alienating the viewer, who becomes trapped between her authoritative commentary and the hermetic, but ill-defined works. It gradually becomes clear, however, that confusion is the very subject of most of the works exhibited.

Combinations of images from different origins and shifts between visual genres seems to be the point of Parreno's J'aime les Filles (Dave Stewart) (I Love the Girls, (Dave Stewart) 1998), a mock video clip of an 80s pop star and advertisement for an 80s sweet. Similarly deceitful is Vicinato (1995), which looks like a remake of a 60s Antonioni film, but is actually a remake of a conversation between Parreno, Rirkrit Tiravanija, and Carsten Höller. Huygue's Blanche Neige Lucie (Snow White Lucie 1997) and Sleeptalking (1998) - in which an extract of Warhol's film Sleep (1963) and a recent interview of its protagonist John Giorno are shown and broadcasted in two separate but visually related rooms - bring together evocations of past and present by combining fiction and documentary. Similarly, with L'Ellipse (1998), Huygue combines real and fictional time by inserting, between two scenes from Wim Wenders' film Der Amerikanische Freund (The American Friend, 1976) a reconstruction of the 'missing scene' which shows Bruno Ganz, in real time and 22 years later, crossing the Pont de Grenelle.

These few examples illustrate Parreno and Huygue's use of the moving image as a malleable, easily recycled and edited material. The artists are eager to assert the particularly contemporary, advanced quality of this medium. But although Parreno, for example, refers to painting and photography as 'a prehistoric dimension', (a comment that sounds like an uncompromising claim for video's avant-garde qualities) his work is more often than not a disappointment. After the viewer gets beyond pinpointing references and understanding some clever formal constructions, a certain shallowness becomes apparent.

This is less evident in Blanche-Neige Lucie, in which the material has a purely documentary function - the lawsuit of Lucie Dolène, the French voice of Snow White, against Disney studios. While the subtitles explain her ambition to regain the 'property of her voice' we see her singing the theme from Snow White. In so doing, her elderly features imperceptibly begin to resemble the cartoon character.

In Sleeptalking, Vicinato and L'Ellipse, however, the remakes have a stifling effect on the original's radical power, which has been hollowed out and used as an empty shell, while remaining - and this is perhaps the downfall of the project - an aesthetic warrant. For in all the artists' efforts to empty out substance through a process of recycling Warhol, Wenders, Antonioni or Cage, the names still remain.

The choice of such figures seems paradoxical given the two artists' intention to liberate themselves from the past and from high art, which is visible in mock futuristic gadgets such as Le Narrateur. But the looming of conventional, chic references in the background of most of the other work casts a different light on their embrace of the present - one that could be described as a fin-de-siècle atmosphere. The burdening of cultural references serves only to reveal the impossibility of original creation