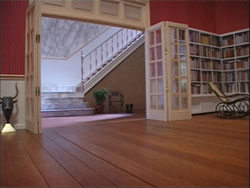 Take a perfectly nice bourgeois apartment, strip it down piece by piece until all that’s left is an empty art gallery, and there you have the new video work by artist Pierre Bismuth and filmmaker Michel Gondry. Or at least, that appears to be one of the jokes contained within this eminently simple yet thoroughly engaging exercise in deconstruction called The All Seeing Eye (2005).

Bismuth and Gondry’s second collaborative effort, following the success of the film Eternal Sunshine of the Spotless Mind (2004), (for which they won the Oscar for Best Original Screenplay along with Charlie Kaufman), brings their particular talents to the fore; Gondry’s visual inventiveness and penchant for low-fi special effects combine with Bismuth’s ironic sense of humour and conceptual rigour to create a coolly surreal décor drama. A camera revolves at moderate speed around a generously furnished room; Eames armchairs, an elegant dining set and potted plants pass in and out of view. As the room continues to spin, however, things slowly start to unravel. Incompatible scenes appear through the windows (Moscow’s Red Square beside the Atomium in Brussels), while furniture disappears as if whisked away by a mischievous djinn (removed by the artist while the supposedly panoptic eye is not looking). This subtractive process goes further than simply emptying the room of its decorative elements; the floorboards, windows, the illusion of other rooms and the very existence of an outside world all vanish, leaving nothing but a white cube. From the gregarious environment of the furnished apartment we arrive at an image of solitude: the eye that sees all becomes an eye that gazes on nothing.

Figure of death? Momentary negation of aesthetics? The more traditional romantic desire to penetrate the humdrum realm of appearances in order to access the real is here replaced by the sober application of a rule or, better, by the exploitation of a formal possibility. As Bismuth remarked in a recent interview: ‘I don’t think that the conscious motivation behind the work was very profound. We emptied the room because the possibility of doing so is contained fundamentally in the very nature of the cinematic set.’ The interest lies precisely in the unexpected connections that arise between ‘naive’ formal considerations (dismantling a set) and wide-ranging ‘philosophical’ problems such as panopticism, reality versus illusion, or the camera as metaphor for the mind. Think of the film Groundhog Day (1993) – its treatment of the heady metaphysical theme of the eternal return is also a reference to the basic feature of filmmaking: there is no live performance but only a series of takes. To use an antique vocabulary, form is revelatory of content.

The only element that resists the inexorable process of subtraction, curiously enough, is not visual but aural. Throughout the video a television plays a scene from Eternal Sunshine, yet even after disappearing, the film’s soundtrack continues to be heard. The voice of Jim Carrey worrying, ‘I don’t understand what I’m looking at … Why am I standing here?’ takes on a particularly ironic significance when accompanied by the image of the stripped-down cube, and at a certain point the film music seems to be channelling Bernard Hermann’s classic score for Vertigo (1958).

‘The All Seeing Eye depicts God looking over the universe before His act of Creation. The Eye, missing nothing, sweeps all over the universe.’ These sentences come from the liner notes of the 1965 Wayne Shorter album that, one might surmise, provided the title, if not part of the inspiration, for Bismuth and Gondry’s video. Yet their All Seeing Eye conspicuously reverses the biblical logic of Shorter’s composition; rather than celebrating the miraculous passage from Nothing to Something, we go instead from Something to Nothing. Presence, not absence, is the fundamental starting-point; the void is ‘something’ actively to be produced. Is there a deeper truth lurking in this speculative reversal? The 16th-century Jewish mystic Isaac Luria once developed a peculiar theory of divine creation known as the doctrine of Tsimtsum: God, owing to His very immensity and all-encompassing nature, needed to retract a part of Himself in order to make space for the genesis of the universe. Accordingly, the challenge of the artist–demiurge is not to add to the furniture of the world but to institute a kind of absence, to cut through the massive ballast of already existing things. Is this not the proper paradigm for thinking the act of creation?