Large-scale sculptural interventions pull in the crowds, but can they play serious? 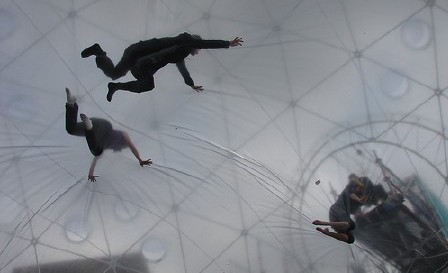 It’s like Dorothy’s house has crashed into Do-Ho Suh’s suburban home, courtesy of a diabolic tornado. On the other side of the gallery another fearsome projectile has ripped through an impeccably furnished IKEA living room, laid out by Los Carpinteros, leaving a trail of exploded fragments paused as though gravity did not exist. Mike Nelson has summoned a poltergeist party. Various pods have sprouted across the building like art-sores: Ernesto Neto’s is a huge fishnet pendant embellished with other pendulous, perfumed scrota; Tomas Saraceno’s, an inflatable, achromatic pleasure balloon; and Tobias Putrih has DIY-ed a ramshackle cinema whose inner grace belies its favela-like exterior.

These are some of the works on show in the Hayward Gallery’s ambitious architectural blockbuster, ‘Psycho Buildings’. With a title borrowed from Martin Kippenberger’s 1988 book, the exhibition provides nine artists and one architect with the Hayward’s Brutalist backdrop as a starting point and a brief that seems as simple as, ‘Let it rip!’ Maybe it’s Ralph Rugoff’s psychoanalytic way of telling us that, as the gallery’s still relatively new director, this hulk of obdurate concrete is his bitch now.

The Hayward turns 40 this year and ever since the gallery and its sister building, Queen Elizabeth Hall, opened they have borne the brunt of Londoners’ contempt. Adored by only the informed few (I rate it one of the best galleries in the world), Brutalism has remained a dogged blind-spot in British populist taste-tests. As the Smiths song goes, ‘Yes I know I’m unloveable / You don’t have to tell me’.

The angry-looking behemoth opened the same year that students rioted in Paris, which is why this show celebrates a double birthday of sorts. 1968: the Big Bang of modern intellectual activism and politics as aesthetics. There’s a nominal whiff of ‘60s references in several of the works in ‘Psycho Buildings’: Saraceno invokes visionary architect Buckminster Fuller as well as Austrian experimentalists Haus-Rucker-Co; Neto’s stretched fabrics recall fellow Brazilians such as Hélio Oiticica and Lygia Clark. Mike Nelson’s theatrical trashing of one of the galleries could almost have been a messier, malevolent version of Michael Asher’s ‘institutional critique’.

But there’s another index of ’68-ism here that crystallizes a contemporary artistic fetish that may also be worth thinking about – and even worrying about. Austrian collective gelitin’s boating lake – in one of the Hayward’s terraces – demands interactivity and elicits a sense of carefree play (if you can forget the attendant at your side ensuring that you don’t drown or go over the edge). Atelier Bow Wow’s huge metallic prophylactic inserts itself in the gallery’s interior, with us, the visitors, playing accidental spermatozoa within. And Saraceno’s bouncy-ball dis-inhibits its participants into a giddy amorousness. Barbarella would feel at home in this frisson-zone.

These immersive works are in the lineage of other major sculptural interventions Londoners have enjoyed in the last few of years. Olafur Eliasson’s The Weather Project (2003) lulled Tate Modern visitors into an imaginary internalized beach scene. Carsten Höller’s Test Site (2006) inserted vertiginous slides in the same Turbine Hall, turning it into a ludic theme park in which play was considered critical engagement. And Jeppe Hein’s Distance (2007) at the Barbican Curve galleries was a consummate hit with young kids, who ran around screaming with excitement, desperate to see where the black balls would roll to next in the massive mini-rollercoaster ride. Christoph Büchel’s Coppermill installation (2007) led its guests from one unnerving Lynchian room to another, complete with secret hatches, and underworld mammoths. Despite the brooding ambience, one felt like a child allowed to rummage through a fabulous film-set.

For the Situationists, ‘play’ was a key aspect of personal and societal revolution. Taking inspiration in part from the libidinous freedom of both Surrealism and Dutch theorist Johan Huizinga’s 1938 book Homo Ludens, Situationist desires deemed play to be subversive, unsettling and anti-establishmentarian. For ‘60s architects like Coop Himmelb(l)au and Haus-Rucker-Co, inflatable blobs and bouncy surfaces necessitated an altered form of human behaviour quite separate to bourgeois rectitude. Play was radically serious, and a radicalized future was at stake by agreeing to play seriously.

Is this the same kind of play that we continue to see today in many of contemporary art’s interactive playgrounds? I don’t think so. Play, today, is just play, the kind you might find at Alton Towers – or Blackpool Pleasure Beach. It’s play without subtext, without worry or unruly threat. Play as aesthetic salve.

I’m beginning to believe that this tendency fits neatly into a larger transformation that has seen art become fully embraced by the masses as just another branch of the entertainment industry (iconic architecture is, of course, another). Tate Modern’s staggering visitor numbers – 4.9 million a year and rising – attest to the touristic pull that contemporary art can have today. But Kant’s injunction that art once ought to be experienced as ‘disinterested aesthetic experience’ increasingly gives way to something else: a literal captivation of the viewer – a capitulation to the work with all your bodily attention. We are a growing generation of kidults. And kidults just want to have fun.

Neoliberalism casts art as a safe and entertaining consumer-friendly facet of the burgeoning experience economy. Saatchi’s ‘Sensation’ show in 1997 coincided with the momentous victory of New Labour, itself a symbolic stealth transformation of the once political left into Conservatism by another name. ‘Sensation’ provided a safe shock ’n’ awe art experience replete with the horror thrills of a good ghoulish flick. Like the blood in Godard’s Pierrot le Fou (1965): ‘Don’t worry, it’s only red paint.’

At the risk of sounding like the Victor Meldrew of aesthetic theory (self-revelation comes at the strangest of times), let’s put it like this: if only the play were a little more psycho (as in Mike Nelson’s maligned, spectrally disturbed upper gallery intervention) and a little less playful. Then ‘Psycho Buildings’ would be truly deserving of its deliriously deranged title.