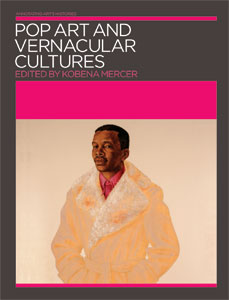 Scholarly writing on Pop usually centres on gallery-oriented art by people from a very narrow segment of the world: New York, Los Angeles and London. This premise forms the background for Kobena Mercer’s anthology Pop Art and Vernacular Cultures.

Certainly, the authors expand our sense of where to look for Pop. The book opens with one of its liveliest reads: Gavin Butt’s elegant essay on the theatricality of sincerity in Shirley Clarke’s film Portrait of Jason (1967). Holly Barnet-Sanchez’ text on Chicano art is perceptive and engaging, in part because it is animated by Tomas Ybarra-Fausto’s influential (and very funny) manifesto for Rasquachismo (a form of vulgarity and bad taste appropriated as a radical aesthetic). In his own essay ‘Tropes of the Grotesque in the Black Avant-Garde’ Mercer uses literary scholarship on ‘double-voicedness’ in African-American studies to consider how ‘visual artists … came into agency by operating “in-and-against” the dominant codes of national culture’. Here Mercer offers ground-breaking readings of work by Betye Saar, Robert Colescott and David Hammons. In the process he offers one of the more devastating critiques of art-historical protocols as he theorizes just how and why black artists rarely receive attention for their provocative formal practices.

Most of the contributors tackle the ethics of art-historical writing, the politics of the now-famous conversations about the definitions of the Modern and the Postmodern, between art and kitsch, and, to a certain extent, of content and form. This is as important to Mercer’s project as the more practical aim of introducing readers to communities of artists marginalized by art history. The point here is that these artists have a lot to teach us about the contingencies of the Modern, the folk, the everyday, mass culture and the politics of location. But before we can really ‘read’ their work, we need to grapple with the disciplinary structures (of museums, markets and scholarship) that have limited discourse on these artists. The particularities of modernization projects, nationalist agendas and (post-) colonial states deeply inform how artistic communities understand themselves in relation to key art-historical terms such as ‘autonomy’ and ‘avant-garde’. The difficulty of these topics and the need to familiarize readers with such a diverse range of contexts can make some of the reading slow going. But there is a tremendous pay-off in taking the time required by, for example, Sonia Salzstein’s breathtakingly ambitious statement on the spatial politics of Postmodernism as encountered in the work of Brazilian artist Antonio Dias, Colin Richards’ mapping of tensions between flat, abstract painting and the incorporation of folkloric gestures in the work of South African painters, Geeta Khapur’s nuanced portrait of Bhupen Khakhar as ‘the archetypal post-colonial artist’ or Martina Koppel-Yang’s analysis of the importance of vernacular culture to post-revolutionary Chinese artists sorting their way through a state in which art was always already integrated into life, as part of the revolutionary programme. Read any single one of these essays and you are given meaningful insight into the political landscape of contemporary art. Each essay takes up Pop as a site of contestation – this is what makes the volume so interesting and informative: it reminds us that even in New York in the 1960s Pop art was as much a polemic as a poetic and vice versa.