This autumn was definitely high season in South Korea, as everything seemed to be happening at the same time. As incredible as it might seem, the country hosted four biennials concurrently: the 9th edition of the renowned Gwangju Biennale; the Busan Biennale, curated this year by Roger M. Buergel; the 3rd Daegu Photo Biennale; and the 7th Mediacity Seoul. This frenetic synergy was further intensified by two exhibitions of artist prizes: the prestigious Hermès Foundation Missulsang Prize, and the brand new Korea Artist Prize, co-organized by the National Museum of Contemporary Art and the SBS Foundation. 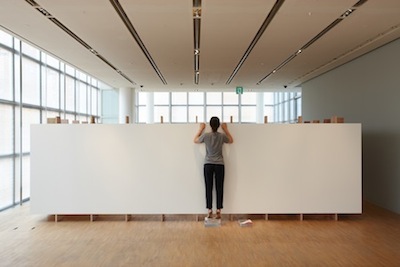 Also this year, the Nam June Paik Art Center in Seoul is celebrating what would have been the artist’s 80th birthday with several events, including a major exhibition, ‘Nostalgia is an Extended Feedback’, with a focus on cybernetics. The Leeum, Samsung Museum of Art hosted the fourth edition of its regular exhibition ‘Arspectrum’, which is dedicated to young talents. The cutting-edge gallery PLATEAU, in another part of Seoul, featured a solo show by Felix Gonzalez-Torres. Similarly, Artsonje Center, Kukje Gallery and other commercial galleries all seemed to be showing their ‘best of’.

It was actually very hard to keep track of everything during my short visit to Seoul this September. I briefly wondered why the four biennials had been scheduled to take place in the same year, at the same time. But the reason was obvious: to obtain maximum visibility from international curators and art critics who are all the more willing to make the long trip to Korea if they could embark on something like a ‘cultural tour’.

I was invited to Seoul by the Hermès Foundation to be part of the jury for the Missulsang Prize, which is considered the equivalent of the Turner Prize. I was rather surprised to find out that there was another prize exhibition taking place at the same time. With the Hermès Prize already well known for promoting some of Korea’s most interesting talents – including Koo Jeong-A, Sanghee Song and Do Ho Suh, among others – how, I wondered, would the inaugural Korea Artist Prize find its own distinctive role? I soon found out that the Korea Artist Prize had chosen to showcase well-established, mid-career artists, whereas Hermès pursued its reputation for supporting and introducing emerging artists to the art world.

My visit to the National Museum of Contemporary Art Korea to see the Korea Artist Prize exhibition was quite a journey. The museum is located on the outskirts of Seoul in the middle of a gigantic park next to a theme park. I was informed that this strange location was the idea of one of Korea’s former dictators, who decided in the 1980s that this was the perfect setting for a museum of contemporary art. The exhibition compensated the trip. Set-up as four solo shows – by prize nominees Gimhongsok, Kyungwon Moon & Joonho Jeon, Minouk Lim, and Yeesookyung – it gives an interesting panorama of the Korean art scene. The prize’s main sponsor is SBS, one of Korea’s major TV channels, and this was definitely visible in the overall presentation. Along with the exposure afforded the artists by the central space, a special TV programme was broadcast on national television as part of the benefits of being one of the nominees.

In Yeesookyung’s portion of the show, ‘Constellation Gemini’, she revisited Korean traditional art in a series of works brought together through the artist’s idea of symmetry. A thousand fragments of broken porcelain were presented under bright neon lights, becoming fetishized objects. Perfectly symmetrical, amusing simulations of religious paintings hung on the walls and two videos showed documentation of a traditional Korean dance, Kyobangchoom, which was performed by twins during the opening. The same but different, the self and the other – the overall tone of Yeesookyung’s installation was highly metaphorical.

Gimhongsok’s People Objective-Wrong Interpretations (2012) also dealt with the idea of ‘same but slightly different’, only here the tone was less poetic. Gimhongsok confronted the audience with three almost identical rooms – ‘Room of Labour’, ‘Room of Metaphor’, and ‘Room of Manners’ – catching the viewer in a slightly disturbing game. What really activated the work was the presence of a performer disguised as a docent, who delivered different narratives on the same works in each room according to three keywords: labour, metaphor and manner. These anecdotes raised questions about the consensus around the art world, revealing its interwoven network of social, economic and cultural systems.

The artist duo Moon Kyungwon and Jeon Joonho seem to prefer a more retro-futuristic kind of institutional critique. Their installation _Voice of Metanoia – Two Perspectives _(2012) was a highly designed and seductive environment. On a light blue wall next to moving mirrored panels on the floor, they showed posters from previous biennials and other exhibitions, with all the information removed, leaving just colours and shapes. An accompanying video related the adventures of a detective sent from the future with a mission: to investigate the role of art in society and unravel the obscure mysteries of our current artistic values and discourses. What a mission! Earlier this month it was announced that this installation was awarded the prize.

Less interested in science fiction and more focused on social realities, Minouk Lim revisited the site of the television studio, perhaps as a direct response to the context of this particular art prize. Entering what looks like a darkened TV studio, we discover that the surface of the table inside it has been burnt. Two large screens presented black and white TV footage of two funerals: one of the late North Korean leader Kim Il-sung and the other of former South Korean President Park Chung-hee. By blowing up and slowing down the speed of these images, Lim heightened the already highly emotionally charged footage, creating something like a huge theatrical stage. This work, _The Possibility of the Half _(2012), talks about a country divided in two that comes together through the images of the sobbing masses. As the official media often manipulate images in order to support the power structures in place, the artist doesn’t hesitate and goes a step further, by over-dramatizing archival TV footage that is already highly emotional.

Although it also presented the work of Korean artists nominated by an international jury, the exhibition at the Hermès Foundation of the nominees for the Missulsang prize felt very different. Instead of separate solos shows, it functioned like a group show, as the works of each of the three nominees – Donghee Koo, Mi-Kyung Lee and Jackson Hong – mixed together incredibly well. In a certain sense, this is not surprising as two of the nominees have a special interest in art and design and the third artist decided to work with the space of the foundation.

Originally trained as a designer, Hong likes to push the borders of art and design to extremes. In Mass Production (2012) he proposed a sort of memorial to what seems to be an obsolete kind of production. He filled the main gallery with colourful, curious objects on pedestals – atypical deformed machines or hybrids of machines with human/animal figures, whose scale has been altered, so they looked either too big or too small. On an adjacent wall, he hung 50 patent diagrams he randomly selected while researching the words ‘redemption’ and ‘punishment’. Neither art nor design, the question seems to be who is punishing who. Not so far away, the viewer was confronted with three other pieces that also didn’t quite seem to fit, by his fellow nominee, Donghee Koo. Then the viewer came up against a giant square fence that literally blocked your passage. Logically named Fence (2012), Mikyung Lee’s work referred to fences built around construction sites and their potential for imagination. Curious to see what’s inside this beautifully designed minimalist sculpture, I stepped on the small circular pedestals to look inside just to discover there is nothing to see. Does too much expectation produce a void?

At the entrance I noticed a shiny black corridor inside which I overheard irritating sounds of mosquitoes buzzing mixed with the barely perceptible hum of the Beatles’ Helter Skelter, which lent this installation by Donghee Koo its title. At the centre of the labyrinthine corridor, I found a miniature screen presenting images I could hardly decipher. Viewing these small blurry images was like looking out of a window to see some kind of action in a neighbour’s apartment. But who is looking at whom? I was suddenly confronted with my own voyeurism. Donghee Koo likes to propose unsolved riddles for the audience to unravel.

Seeing this work, I remembered the pieces I had seen earlier in the main gallery and returned there. One is a curious sculptural object hanging from the ceiling made of an accumulation of spiral shaped mosquito-repellents with a multicoloured parasol on top. The other is a black tire used as a swing. The most intriguing was a square glass plate on the floor where all sorts of small objects (the artist’s memorabilia) were placed, including miniature photos of a hippie community that could be the Manson Family. Everything suddenly interconnected. This complex ensemble of works won the Hermès prize.

Heavy traffic makes a visit to the Nam June Paik Art Centre, situated on the outskirts of Seoul, also an adventure, but worth the trip. Nam June Paik’s multidisciplinary visionary outlook serves as a guideline for its series of temporary exhibitions, which confront his works with works by other artists both past and present. This is also the structure of the special exhibition “Nostalgia is an Extended Feedback”:*http://www.njpartcenter.kr/en/program/sp_exhibitions/show.asp?id=190, created in celebration of Paik’s 80th birthday. The show was curated not as a classical retrospective of the artist’s life’s work but a more focused presentation related to his vision. Named after a phrase coined by the artist himself, the exhibition mainly focused on his special interest in cybernetics and his idea that man, machine and nature would actually come together without destroying each other.

It was a pleasure to see seminal works such as Paik’s TV Garden (1974–2002), in which monitors placed in an internal garden broadcast hopping images of dance and music fusing ecology with technology, or One Candle (1989) in which Paik manages to create a big spectacle of flickering coloured images that invade the whole space out of one lit candle, turning reality into virtuality. Other favourites came from his video sculptures from the 1980s, the ‘robot’ series, for which he gave old television sets new life through amusing titles such as Descartes, Hippocrates, Schubert or Bob Hope. The show continuously reminded me of Paik’s enormous creativity and capacity to anticipate the future.

In the last few years, the public interest in contemporary art in Korea has been increasing, reaching mainstream media exposure to the point where the star protagonist of a popular soap was, for better or for worse, a curator! As we approach the country’s presidential elections this December, there is a certain fear that public funds for the arts could be largely reduced if Geun-hye Park, the daughter of the former authoritarian president, wins. But I hope this vibrant scene will keep up its pace.