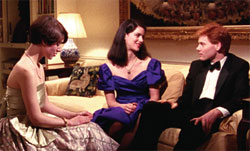 ‘Do you know the French film The Discreet Charm of the Bourgeoisie? When I first heard the title, I thought, finally someone’s going to tell the truth about the bourgeoisie. What a disappointment! It would be hard to imagine a less fair or accurate portrait.’
Metropolitan (1990)

The re-release by the Criterion Collection of Whit Stillman’s out-of-print début film, Metropolitan, appears to be the first step in restoring the witty and deeply unfashionable work of the director to the filmic canon. Alongside Barcelona (1994) and The Last Days of Disco (1998) Stillman’s small, perfectly crafted body of work forms a trilogy, if not in content then certainly in its unique sensibility.

At first glance Stillman’s subject matter appears to be chosen with a deliberately contrary attitude. The tribulations of inherited wealth, pro-Americanism in Europe and 1970s disco music all provide the improbable and outmoded backdrops against which his youthful, self-critical heroes and heroines state, and then betray, their principles. Yet it is precisely in the striking of this attitude that Stillman’s importance as a filmmaker lies. In the tension between these hermetically sealed worlds – doomed to crumble – and reality Stillman not only painstakingly charts his characters’ stumbling growth but also challenges our own preconceptions of authenticity.

‘Maybe there’s a pornographic element to taking things that are unfashionable and a bit uncontroversial and unpopular and exposing them,’ said Stillman recently, ‘but these things are still part of the texture of people’s lives.’ Indeed one of the delights of watching a Stillman film is never quite knowing what is going to hit you next: a paean to management theory or a debate on Jane Austen and Lionel Trilling? Just as shocking are the appearance of conga lines, limbo dancing, and the cha-cha.

Stillman is unabashedly conservative, and such is his light-handed
approach that fashionable preconceptions are irresistibly inverted. In Metropolitan, Stillman’s low-budget picture about high-budget individuals, a group of New York débutantes walk smartly from one Upper East Side cocktail party to another. The group is joined by an outsider (from the Upper West Side), and so begins a tale that works its way through the labyrinth of social convention. Yet Stillman does not simply use his moneyed environs as gilding. He also provides a profound study of a class, and of the restricted characters that inhabit it. The expectation of failure hangs heavy on these self-proclaimed members of the urban haute bourgeoisie, and the spectre of ‘downward social mobility’ looms in the background. When one of the film’s protagonists is told that people from his privileged milieu do sometimes succeed, he cannot believe it, declaring, ‘It doesn’t ring true’.

While Stillman’s finely wrought wit attracts comparisons to both the films of Eric Rohmer and the novels of Austen, he also shares with them an essential seriousness; his films also ponder the plight of those trying to establish a sense of self while at the mercy of a limited set of mannerisms. His characters are committed to an aesthetic, which they suspect is damned, but have no choice except to inhabit it as sincerely as they know how.

It is rare, in recent times, for anyone to treat the patrician classes in such a sympathetic manner. For Stillman this rankles. ‘I think it’s amazing the way class hatred is legitimized by people who would be appalled at kinds of racial hatred or religious hatred’, he says. ‘Although Marxism has been overthrown in many aspects of the real world, the attitudes that dominated among intellectuals have allowed people to express hatred towards others just because of their presumed class affiliation with no compunction, no embarrassment.’

True, his characters are wealthy, but that hardly seems the point. For Stillman is not so much a political director as a sociological one. His genius is the study of the group dynamic and of the self within that group. In Metropolitan the outsider character declares himself a follower of the French Utopian socialist Charles Fourier and professes his disgust for his acquaintances’ privileged lifestyle. Yet slowly he realizes that it is community itself that he seeks. A comparable transcendence can be found in Barcelona, which has as its background the American bombing of Libya in 1986. Although the film’s two main characters are unabashedly patriotic, they are struggling with something much larger and more personal than politics. Similarly topsy-turvy is The Last Days of Disco, in which Stillman refuses to subsume the era in kitsch and cliché, instead perceiving disco as being about kinship regardless of identity.

It is this generosity of spirit that lends Stillman’s films perhaps their most unfashionable commodity of all – earnestness. While his dialogue may be draped in irony, it is at its core highly moral and painfully self-aware. As one of his characters in The Last Days … says about the Shakespearean admonition ‘To thine own self be true’: ‘What if “thine own self” is not so good? What if it’s pretty bad? Would it be better, in that case, not to be true to “thine own self”?’

George Pendle is a writer based in New York.