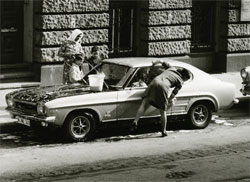 In the context of burning Paris suburbs, resurgent European neo-nationalism and xenophobia encouraged by the ‘War on Terror’, not to mention the neglect of migration as a social and juridical reality in Germany, ‘Projekt Migration’ was one of the most relevant and successful exhibitions I have seen. Given the complex socio-political subject, it’s not hard to imagine how wrong this ambitious undertaking could have gone. It might easily have become an exercise in trying to please that ended up alienating everybody.

Instead – to the credit of its curatorial team, Aytaç Eryilmaz, Marion von Osten, Martin Rapp, Kathrin Rhomberg and Regina Römhild – every nook and cranny of the exhibition, which took the form of a combination of historical documents, artefacts and displays alongside works by an inspired selection of around 90 contemporary artists, seemed to have benefited from some serious thought and ongoing, open-ended discussion. Contemporary art was brought into ‘active dialogue’ with research and documentation by various universities, institutes and associations. This functioned partly thanks to the efforts of the exhibition’s designers: architect Adolf Krischanitz and artists Julie Ault and Martin Beck. The decision, for example, to use some run-down 1950s and 1960s office buildings in central Cologne as additional venues
was perfect.

In comparison with the USA or the UK, Germany – although it has a sizeable immigrant community – isn’t known as a multicultural society. In the postwar and Cold War period both Germanys allowed foreign labour in as temporary ‘guest’ or ‘contract’ workers. In the West (between 1955 and 1973) millions came on this basis from countries including Italy, Greece, Turkey, Tunisia and Morocco. Initially their conditions and rights were miserable, and only much later came the possibility of permanent residency and the chance to apply for family members to be allowed to join them. This led to a kind of uneasy de facto immigration that (despite recent reforms) still characterizes Germany. Aside from ‘illegal’ immigrants, political asylum seekers also added substantially to their complement. In the East workers came in far fewer numbers, from places such as Mozambique and Vietnam. After the Berlin Wall came down, many were left without jobs or status, and some were even deported. A fat multilingual publication accompanying the exhibition gathers together critical essays and data on this difficult socio-political history while also putting it into a global perspective.

The problems of representing or speaking with an ‘authentic’ voice on behalf of ‘the Other’ within the privileged situation of cultural production was continually raised by the works in the exhibition. Perhaps the only way to communicate across such a divide is to make the relations transparent, to acknowledge all the gaps, inequalities and entrenched power relationships, and the personal pain and triumphs they engender, visible or tangible. There were many outstanding works, including video pieces such as Anri Sala’s dark language lesson Làk-kat (Foreign Language Speaker, 2004); Ann-Sofi Sidén’s Warte-Mal! (Hold On!, 2004) about sex workers on the Czech–German border; Jeanne Faust and Jörn Zehe’s 16 mm film Sonst wer wie du (Who Else Like You, 2003), a haunting encounter in a field between an off-screen voice and a young seasonal labourer; and Romanian activist artist Dan Perjovschi’s numerous sharp marker-pen cartoons, such as No Turkey. No Thanksgiving (2005).