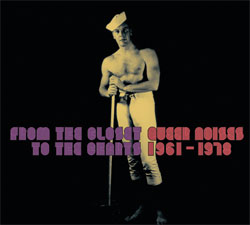 Jon Savage’s inspired new compilation Queer Noises 1961-1978 (From the Closet to the Charts) is a labour of love, a celebration, a story of resistance and personal triumphs and an exercise in setting music history less straight. Its 24 tracks from the UK and USA of music with ‘explicit or fairly implicit queer themes’ are arranged in a chronological order, a long, hard-earned fade-out that culminates with Sylvester’s You Make Me Feel (Mighty Real) (1978). Musically it has a little bit of everything from cabaret, spoken word, Beat, Soul, Mod, Country, Psychedelic rock, Disco (of course), and yes, even some Punk.

Diversity is the key. Fly-by-night labels for the Queer scene, such as the rediscovered LA label ‘Camp’, originally released about half of the tracks. The early section of the CD is peppered with Drag show sarcasm, vicious wit, innuendo and double entendre. (Take, for example, Mr. Jean Fredericks’ towering falsetto: ‘Your fairy days have ended when your wand has started bending, no one loves a fairy when she’s old.’) It’s all about being (or getting) frank; lyrics do make a big difference. Of course, it’s not always about audio brilliance but the selection is full of gems. Highlights are The Kinks See My Friend (1965) with its progressive Indian drones, the freaked-out country rock sound of Curt Boettcher’s Astral Cowboy (1969) and the Tornandos’ Do You Come Here Often (1966), produced by Joe Meek – an organ instrumental with a surprise fade-out of bitchy chat in a toilet that is amazing to hear on an EMI release. (‘I’ll see you down at the Dilly/Not if I see you first.’) There’s not much ‘real woman’ on the compilation but the sleeve notes to Polly Perkins’ sexy Coochy Coo (1973) from the album ‘Liberated Woman’, which includes the line ‘liberation for woman means society crumbling, marriage ruined, children left to go their own scenes, men losing their hold on the purse strings and bedclothes, women fancying other women’, almost single-handedly makes up for this. Similarly radical is LA rent-boy punk Black Randy with lyrics that include: ‘Schools and factories make me sick, I’d rather stand here and sell my dick.’ In contrast there are tracks by forgotten singer songwriter Michael Cohen – the raw and chokingly emotional Bitterfeast (1973), a folky piano ballad based on a Leonard Cohen poem; and a lost classic, or The Miracles’ sunny and affirming Ain’t Nobody Straight in LA (1975): ‘Homosexuality is part of society’. Revealing how gender and musical genre bending might go hand in hand in a time when George Michael still has to explain what he’s doing at Hampstead Heath, and ‘gay’ is routinely used as an insult, this compilation is not just a joy to listen to, but a necessary and intelligent piece of activism.